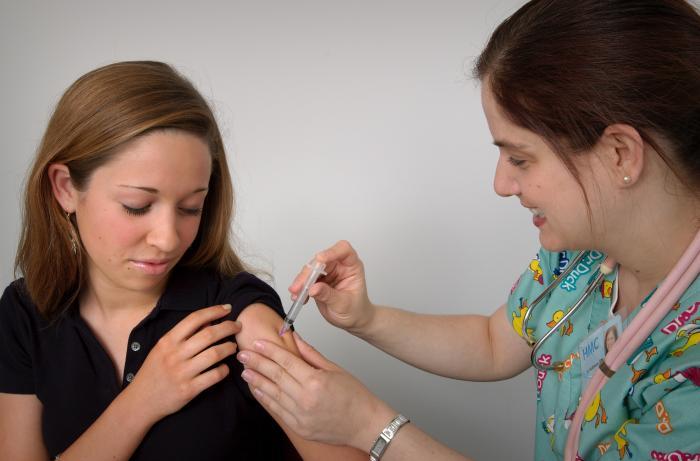 Among the surprising findings of the study is that the 2013 flu vaccine was not significantly protective against influenza A/H3N2 in children ages 9 through 17., James Gathany / CDC

A new study found that influenza vaccine yielded moderate overall protection during the 2012-13 flu season, an unsurprising result. But it also offered a couple of surprises, including that patients who missed the current vaccine but had received the previous year's version still seemed to have some protection against the virus.

The study, published this week in the Journal of Infectious Diseases, also suggested that the flu vaccine was not significantly protective against influenza A/H3N2 in children ages 9 through 17, a finding that puzzled the authors.

The investigators also found that the trivalent (three-strain) vaccine for 2012-13 provided moderate protection against both lineages of influenza B, not just the Yamagata lineage included in the vaccine—unlike some previous studies.

"Cross-lineage protection and residual effects from prior vaccination were observed and warrant further investigation," the report observes tersely.

The study was conducted by the Centers for Disease Control and Prevention's (CDC's) US Influenza Vaccine Effectiveness (VE) Network, which includes five centers around the country, in Marshfield, Wis.; Ann Arbor and Detroit; Temple-Belton, Tex.; Seattle; and Pittsburgh.

The authors used a test-negative case-control study design, wherein patients with an acute respiratory illness during flu season are tested for flu and their vaccination status is determined. Those who test positive are classified as cases and those who test negative as controls.

Current-season flu vaccination was documented in 45% (2,877) of the patients. Of these, 83% received inactivated flu vaccine (IIV), 8% received the live attenuated (nasal spray) vaccine (LAIV), less than 1% received other vaccine types, and 8% had an unknown vaccine type. Current and prior-year vaccination were highly correlated.

The investigators found that, when compared with those who received neither year's vaccine, the first three groups all had similar protection against H3N2. The adjusted VE numbers were 35% (CI, 21%-47%) for those vaccinated both years, 37% (CI, 19%-51%) for current-season-only vaccinees, and 33% (12%-49%) for prior-season-only vaccinees. The results varied somewhat by age-group.

In the same analysis for type B, the researchers found that VE was higher than for H3N2 and similar for all combinations of current and prior-season vaccination and all age-groups. For example, VE against B/Yamagata was 62% for both-season vaccination, 69% for current-season only, and 50% for prior season only.

"Overall, we found minimal differences in effectiveness against A/H3N2 and B for each of the three current and prior season vaccination exposure groups, suggesting some residual effect of prior vaccination on current season VE," the authors wrote.

"The point is that there's more residual protection than we thought," said coauthor Arnold Monto, MD, a professor of epidemiology and public health at the University of Michigan, in an interview. But he cautioned, "I think the whole issue of prior-year vaccination is one we don't fully understand."

Monto said his group has been analyzing some of its findings from comparative clinical trials of IIV and LAIV from 2004 to 2008 and has found that with IIV, the waning of antibodies after vaccination was less than previously thought. "Therefore the concept that it's very important to get vaccinated late in the vaccination season," to shorten the time between vaccination and potential flu exposure, "may have been relatively overstated."

The current findings contrast with those of a study published last year by Monto and colleagues in Clinical Infectious Diseases. They recruited 328 households and monitored them during the 2010-11 flu season. The results showed that flu risk was almost the same in vaccinated and unvaccinated participants. But when the researchers looked separately at participants who had been vaccinated in the 2010-11 season but not in the previous season, they found a VE of 62%, whereas those who were vaccinated in both years had no significant protection.

In the new paper, the authors observe, "The immunologic effects of repeated vaccination are not well understood, and additional studies are needed to understand the impact of past infections, past vaccinations, and antigenic variability on risk of illness."

In other comments, the authors said the low VE against H3N2 in 9- to 17-year-old children was unexpected, since vaccine performance in that age-group was similar to that in other groups in the previous season. Further work, they said, is needed to identify factors that might contribute to lower protection in older children.

Monto suggested that the finding of low VE for H3N2 in older kids may not mean much. "If you cut things too much in terms of the age-groups, you'll find results that can't be replicated in other years," he said in the interview. "There's some degree of random variation, because we've always found that age-group pretty responsive" to the vaccine.

The authors said their current finding of cross-lineage effectiveness, along with the similar previous evidence, suggests that quadrivalent (four-strain) flu vaccines "may provide little or no additional protection compared to trivalent vaccines," which target just one type B lineage.

They added that further research is needed to assess whether quadrivalent vaccines yield greater benefits in children, who have had fewer natural influenza B infections than older groups have.