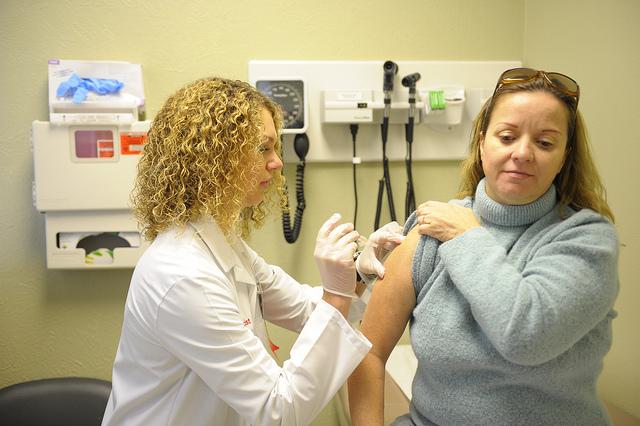 In a study designed to identify host and immunologic factors that might affect flu vaccine effectiveness, a research team based in Canada found that genetic changes in circulating viruses, birth year, repeat vaccinations, and waning protection may all play a role. They reported their findings this week in the Journal of Infectious Diseases.

They based their findings on an analysis of data from a Canadian surveillance network during the 2015-16 flu season, which was dominated mainly by 2009 H1N1, didn't peak until March, and had a lot of influenza B activity from the Victoria lineage that wasn't a component of that season's trivalent vaccines. Though the circulating H1N1 strain antigenically matched the vaccine, the season saw the emergence of subclade 6B.1. The team compared 596 2009 H1N1 and influenza B Victoria cases with 926 test-negative controls.

Overall, vaccine effectiveness (VE) against 2009 H1N1 was 43%, lower than the 71% VE against the strain seen during the 2013-2014 season. Similar declines were seen in the United States and Europe, but they weren't as steep as Canada's. VE was also lower in adults born between 1957 and 1976, those vaccinated in both the previous and current seasons, and with a pattern of waning VE later in the season.

For influenza B, VE against the Victoria lineage viruses was 54%, adding more evidence of possible cross-protection. And for flu B, researchers didn't see the variations they saw for 2009 H1N1.

They concluded that other factors than just antigenic match may affect vaccine performance, such as shifts in viral genomes, effects of childhood priming and cross-reactive boosting exposure, effects of repeat vaccination, and waning immunity. "Such influences on VE estimates may be daunting to untangle but warrant further in-depth investigation to identify improved vaccine and program options," they wrote.

'Part of a complex web'

In a related commentary, Edward Belongia, MD, director of the Marshfield Clinic in Wisconsin, noted several limitations of the study but lauded the comprehensive approach.

"The authors clearly acknowledge the limitations of these exploratory analyses," he wrote. "This was an observational study and power to detect age-stratified effects was low.

"Interpretation of birth cohort effects is particularly difficult because year of birth is an imprecise surrogate for imprinting subtype and epitope specificity. An additional limitation of the repeated vaccination analysis is the reliance on self-report and sentinel physician documentation to classify vaccination status in prior seasons."

Belongia, who was not involved in the study, also notes the possibility of poor recall among the patients.

He concludes, "Antigenic match remains an important determinant of vaccine effectiveness, but antigenic match alone does not explain why influenza vaccines are predictably less effective than vaccines against other viral infections. It is only one part of a complex web of interactions that include genetic evolution of circulating viruses, gain or loss of glycosylation at key antigenic sites, early childhood imprinting, epitope specificity, egg-induced mutations in high growth vaccine viruses, and the individual immune 'landscape' generated by a lifetime of repeated vaccination or infection.

"Despite decades of influenza vaccine research, we still do not have a comprehensive understanding of these interactions and how they influence vaccine protection."