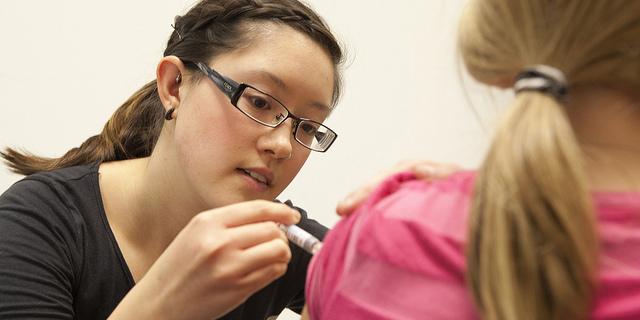 In the 2014-15 influenza season, when seasonal flu vaccines performed unusually poorly overall, people who had not been vaccinated the previous year were the ones most likely to benefit from the vaccine, whereas those who were vaccinated 2 years in a row did not, a new study from Canada's influenza surveillance network suggests.

In an even more unusual finding, people who were vaccinated 3 years in a row—in the 2012-13, 2013-14, and 2014-15 seasons—appeared to have a higher risk of being infected with the dominant flu strain in the latter season, according to the report, published last week in Clinical Infectious Diseases.

That surprising result echoed controversial findings reported by the Canadian flu surveillance network in the wake of the 2009 H1N1 flu pandemic. In studies published in 2010, researchers said they found that Canadians who had received a seasonal flu shot in the fall of 2008 were 1.4 to 2.5 times more likely to get an H1N1 infection requiring medical attention, compared with those who didn't get the seasonal shot.

Scientists can't explain the apparent negative effects of "serial vaccination." But the findings raise questions about standard flu vaccination recommendations, which stress getting a flu shot every year to fight off the ever-mutating viruses.

Danuta Skowronski, MD, lead author of the new study and lead epidemiologist for flu and emerging pathogens at the British Columbia Centre for Disease Control, said the study does not have immediate implications for flu vaccination policies, but it does add to previous evidence that prior-year vaccination can affect the performance of seasonal flu vaccines. She noted that several other studies have suggested such effects.

"The fact that prior vaccination may affect protection in one direction or another is gaining ground in terms of recognition that it may be real," she said in an interview. "We have a duty to understand if it's real, and if so, how it's happening and what are the implications."

A bad season for the vaccine

The 2014-15 season was an exceptionally bad one for flu vaccine effectiveness (VE) in both Canada and the United States, with a nonsignificant VE of just 9% in Canada, notes the study. The vaccine's poor performance has been attributed primarily to the spread of a "drifted" strain of influenza A/H3N2 that became the overwhelmingly dominant circulating strain and did not match well with the H3N2 strain used in the vaccine.

In the United States, overall VE for the season was estimated at 23%.

The authors described the poor flu VE in 2014-15 as the result of a "perfect storm" of conditions that included antigenic drift in the circulating viruses and the use of the same flu strains in the vaccine 2 years in a row, along with the effects of repeated vaccination. They said the apparent poor vaccine performance in repeat vaccinees must be interpreted cautiously, because they couldn't fully rule out underlying differences between those who were repeatedly vaccinated and those who were not.

Other experts praised the study but agreed that the findings must be interpreted very carefully. Brendan Flannery, PhD, lead investigator with the US Centers for Disease Control and Prevention's (CDC's) Influenza Vaccine Effectiveness Network, said the CDC's findings on flu VE in 2014-15 were similar to the Canadian results overall, but US researchers did not find any negative effect from prior-year vaccination. He added that, overall, people who get a flu shot every year have better protection than those who don't.

The study was conducted by Canada's Sentinel Practitioner Surveillance Network (SPSN), consisting of a number of outpatient clinics in British Columbia, Alberta, Ontario, and Quebec. The group used a test-negative study design (TND), which has become standard in observational studies of flu VE. In this approach, patients who seek care for an influenza-like illness (ILI) are tested for flu, and their vaccination status is determined. Flu VE is calculated by comparing the numbers of vaccinated and unvaccinated patients who test positive.

The researchers included 1,939 patients who sought care between Nov 1, 2014, and Apr 30, 2015, about 63% of whom were non-elderly adults. Overall, 36% of them had received a flu shot, and this proportion did not differ significantly between those who tested positive for the virus (34%) and those who did not (36%), the report says.

In their virologic analyses, the team found that the H3N2 viruses had 10 to 12 antigenic amino-acid changes relative to the 2014-15 vaccine virus, while the clade 3 B/Yamagata viruses had 6 to 7 such mutations compared with the vaccine strain.

The overall VE of less than 10% in 2014-15 is the lowest in more than a decade of monitoring by the Canadian SPSN, the authors said. "This low VE was largely driven by circulation of A(H3N2) drift variants (mostly clade 3C.2a) that were mismatched to vaccine," they wrote in a summary of their report.

In most seasons, they added, the flu vaccine is likely to reduce the risk of infection by 40% to 60%, but lower protection, 30% to 40%, is typically seen for H3N2 viruses. This season, VE against the predominant H1N1 flu strain in Canada has exceeded 60% so far.

Skowronski said it has been recognized for decades that prior vaccination can affect flu VE, with conflicting findings reported in the 1980s. In 1999, researcher Derek J. Smith and colleagues did a modeling simulation to try to reconcile these divergent findings. The results indicated that prior vaccination sometimes can boost protection, sometimes has no effect, and sometimes can cause "negative interference, or blunting" of protection, she explained.

Some recent studies suggesting that consecutive-year vaccination can lower VE have come from the University of Michigan and the European Union's flu surveillance network. The Michigan group found the effect in studies of households in the 2010-11 and 2012-13 flu seasons, while the European network observed the effect in the 2014-15 season.

In a Feb 18 report in Eurosurveillance, the European authors wrote that the finding was "congruent with the hypothesis that prior immunisation may decrease the effectiveness of the vaccine and that this negative interference is more important when the antigenic distance is small between successive vaccine components but large between vaccine and circulating strain."

Skowronski said her group's new findings represent only the second time the Canadian SPSN has found evidence that prior-year vaccination can go beyond "blunting" and actually increase the risk of flu, the first time having been in the 2009 pandemic. In that case, the pandemic H1N1 virus was "drastically mismatched" with the H1N1 strain in the prior year's seasonal flu vaccine, she noted.

The new study marks the first suggestion that vaccination more than 2 years in a row can increase the risk of infection with a drifted seasonal (as opposed to pandemic) flu strain, Skowronski said. She noted that her team anticipated that the chance of "negative interference" would be high in 2014-15, given that the vaccine contained the same strains as the previous year and was mismatched to the dominant circulating H3N2 strain.

She commented that most researchers who looked for the effects of previous vaccinations on VE have looked back only one season, and most found only reduced VE, not an increase in risk of flu compared with unvaccinated people. "With the test-negative design, we're now able to see things we couldn't see before," she added.

She called for diligent efforts to figure out what may cause the observed effects. "What I think needs to be done is to look beyond the usual players in in flu. We need to talk to epidemiologists, virologists, immunologists, people with a broader scope of understanding who could help us design a strategy for addressing these repeat vaccine effects."

"It's the lowest VE in a decade," she added. "We can't just report that and move merrily along and hope it won't happen again."

At the same time, Skowronski cautioned that the study is observational, and the findings could be explained by undetected differences between the participant groups.

Also, people should continue to be vaccinated against flu, she stressed: "Of course, overall, vaccine is protective. Rarely we may see these effects of increased risk. We need to clarify that. Until now we've always found the vaccine protective, and that's important for people at high risk of flu complications to know.

Flannery, of the US CDC, gave the study good marks, saying he saw no major gaps or flaws and that the study employed the same test-negative approach the CDC uses to assess flu VE. But he said the US network did not find negative effects from prior-year vaccination in 2014-15.

The CDC's overall findings for flu VE in 2014-15 were very similar to the Canadian findings, he said. "We saw essentially zero VE against the drifted [H3N2] group. We didn't see any difference by whether people were vaccinated in the prior year or not.

"For us, the zero effectiveness against the drifted strain is predictable with just how drifted these viruses were. The H3N2 viruses that circulated were antigenically very different from the vaccine strain."

To Flannery, what the Canadian study adds to previous research is the idea that prior-season vaccine effects can occur when there's a drifted virus. "Before, what we saw was there was this effect when . . . circulating viruses were similar to the vaccine virus. This really suggests there may be prior-season effects even with a drifted virus."

As for why this happens, the CDC doesn't know, he said. "We do not have an explanation for why prior vaccination would modify the lack of effectiveness we saw in the 2014 15 season." He commented that there are minor differences between the Canadian and US study methods, such as in the definition of ILI, but it's uncertain whether those would affect results.

The CDC is investigating the effects of previous vaccination on flu VE, with one study now being revised in preparation for publication, Flannery said.

Meanwhile, he said the Canadian findings have no immediate implications for vaccine messages or recommendations.

He advised particular caution in judging the suggestion that people who were vaccinated 3 years in a row had a higher risk of infection in 2014-15 than their unvaccinated peers.

"That's a message we'd like to be really cautious about, any suggestion that there was a negative effect. I think the consistent results between US and Canada are the low VE with the drifted strain," he said. "The negative effects we did not see in the US."

Praise for the study

"I think this is a really good paper," she commented via e-mail. "Their results are consistent with results that will be reported from the US Flu VE network, but our VE estimates were higher. The evidence for detrimental effect of prior vaccination needs to be interpreted cautiously, as indicated, but has been reported in multiple prior publications and is consistent with lower HI [antibody] titers post vaccination in persons previously vaccinated."

Jackson added that one of her "pet peeves" is that flu vaccines are often described as being 50% to 70% effective or even 70% to 90% effective. "These ranges may be applicable if one ONLY includes years in which VE was demonstrated," she said, "but everyone ignores the years in which CI overlap zero and no significant difference in risk between vaccinated and unvaccinated was found. This [2014-15] is one such year."