CDC says norovirus sickens up to 21 million a year 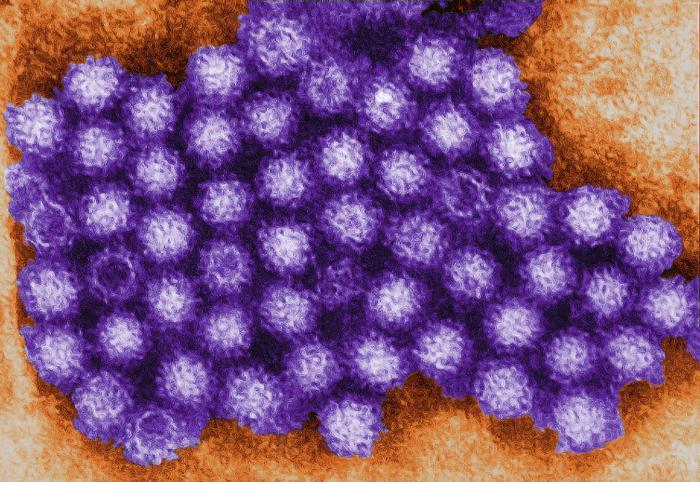 Transmission electron micrograph shows norovirus particles (virions). The virus causes up to 21 million US illnesses and 800 deaths each year., CDC

Getting a handle on the nation's norovirus burden is difficult, because reporting isn't required and there's not a widely used test for the disease, but experts from the US Centers for Disease Control and Prevention (CDC) who analyzed the latest data reported new estimates yesterday—up to 21 million infections each year, as many as 800 fatal.

The new estimates provide some detailed and surprising numbers. For example, the CDC experts predict that the disease strikes five times during a typical American's lifespan.

Before yesterday's new numbers, reported in Emerging Infectious Diseases, the most often cited norovirus burden numbers were from a 1999 report that covered a broad array of foodborne illnesses. While the new annual illness estimate is slightly lower than the earlier one, the CDC researchers reported overall upticks in hospitalization and death numbers.

A new variant that emerged in Australia has fueled norovirus outbreaks in the United States over the past several months. The genotype II.4 (GII.4) Sydney variant has led to disease spikes in the United Kingdom, the Netherlands, Japan, Australia, France, and New Zealand, as well.

Earlier this year the CDC said norovirus has passed rotavirus as the leading cause of gastroenteritis in US kids.

For hospitalizations, the group put the annual number at 56,000 to 71,000 compared with the previous estimate of 50,000. The authors projected that the number of deaths from norovirus ranges from 570 to 800 each year, up from the 310 deaths listed in the 1999 report.

Though not all patients with norovirus seek medical care for their norovirus infections, many do, and the new estimates suggest that the disease is linked to as many as 1.9 million outpatient visits each year and 400,000 emergency department visits.

The new estimates also break the burden down by age, which could help public health professionals target their norovirus prevention strategies. Americans age 65 and older are at greatest risk for norovirus death, while children younger than 5 had the highest rates of norovirus-linked medical visits.

CDC researchers said they based their estimates on studies published over the past 5 years that provided population-based norovirus incidence rates. They noted that all the studies they looked at showed increases during the winter months and in years when norovirus pandemic strains emerged.

When they compared the US norovirus estimates to those of other industrialized countries, they found similar patterns, despite differences in healthcare delivery systems, especially for the United Kingdom, the Netherlands, and Canada. "The substantial incidence of norovirus disease burden is clearly not unique to the United States," they wrote.

Though health officials have made great progress in characterizing the disease, several knowledge gaps remain, such as more detailed information about age prevalence and the role of the virus in deaths, the team observed. They added that the findings lend support to the usefulness of a norovirus vaccine, which is in the late stages of clinical trials.

In a related development, another CDC team yesterday published results from the first 2 years of gastroenteritis data from a new national surveillance system, which also shows a leading role for norovirus.

The findings are from the National Outbreak Reporting System (NORS), which launched in early 2009 and is designed to follow gastroenteritis outbreaks caused by other transmission modes, besides just foodborne and waterborne.

The next most frequently reported causes were Salmonella, Shigella, and Shiga-toxin–producing Escherichia coli.