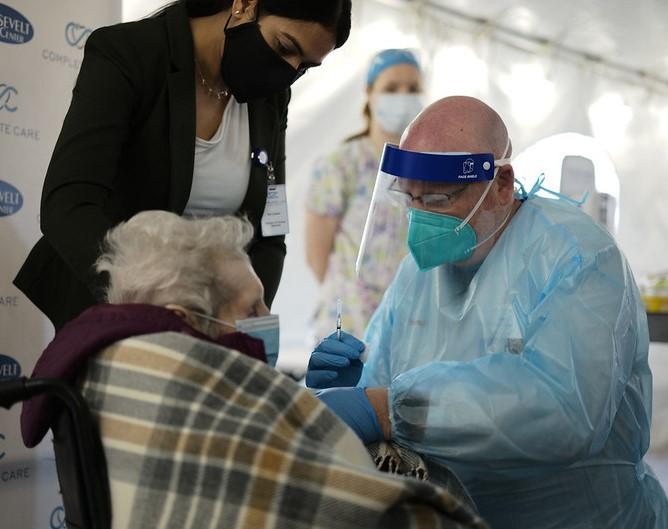 A pair of new studies that sized up how COVID-19 vaccines affected hospitalizations, including during the Omicron variant surge, found that mRNA vaccines were highly effective against severe illness and that unvaccinated people were 12 times more likely to be hospitalized compared with those who had received a booster, with the risk especially high in Black patients.

In other COVID-19 developments, Moderna yesterday file for approval for emergency use for fourth doses of its mRNA vaccine as surges in Asian hot spots continued at very high levels.

The authors of both studies assessed how well vaccination protected against hospitalization during the worst of the Omicron surge and compared it with how well the vaccines held up during the Delta surge. Both studies were published today in Morbidity and Mortality Weekly Report (MMWR).

The first study examined how mRNA vaccines protected against the most severe outcomes, defined as ventilator treatment or death. The authors looked for any differences between patients who had gotten their primary series and those who had also received a third dose.

The case-control study is based on data from a multistate hospital network and included adults ages 18 and older who were hospitalized with COVID-19 symptoms from Mar 11, 2021 through Jan 23, 2022. Of 7,544 patients, 1,440 had lab-confirmed COVID and 6,104 controls tested negative.

Patients who received two or three doses had a 90% reduced risk for ventilator treatment or death from COVID-19. During the Omicron surge, those who had received a booster dose had a 94% reduced risk of the two severe outcomes.

The authors said that most vaccinated people who were on a ventilator who died were older and had complex underlying symptoms, especially suppressed immune systems.

"These findings reinforce the highly protective effects of up-to-date COVID-19 vaccination against severe illness and death among adults, including against current SARS-CoV-2 variants," the group wrote.

In the second study, another group examined weekly hospitalization rates during Delta and Omicron circulation, hoping to tease out any differences based on vaccination status or racial group. Their data were from the COVID-Net surveillance system, which includes 99 counties in 14 states.

The researchers said implementing strategies to boost vaccine acceptance by removing barriers for vaccination in Black adults is an urgent public health priority.

Moderna files for 4th-dose emergency use

In other US developments, Moderna yesterday said it submitted an application to the Food and Drug Administration (FDA) for emergency use authorization (EUA) for fourth doses of its mRNA vaccine. The move came 2 days after Pfizer-BioNTech filed an EUA application for fourth doses.

Moderna's request applies to any adult who has received an initial booster of any authorized or approved COVID-19 vaccine, which it says gives health officials and health providers more flexibility to targeting fourth doses, especially for those at higher risk. For comparison, Pfizer's request for fourth dose authorization applies to those ages 65 and older.

The activity surrounding fourth doses comes as the nation braces for a possible spike in COVID-19 activity, based on the experience of some European countries.

Anthony Fauci, MD, White House chief medical advisor, told ABC News that the United States can expect to see increased cases from the more transmissible BA.2 Omicron subvariant in the weeks ahead, but it might not produce huge spikes in hospitalizations and deaths.

In global COVID news, China today reported 4,130 new cases today, 1,742 listed as asymptomatic, with the more transmissible Omicron variant pushing cases to 2-year highs. More than half of today's new cases were from Jilin province, one of the handful of locations that are under lockdown.

At a briefing today, Chinese officials emphasized that the country must learn Hong Kong's painful lesson about deaths in vulnerable people by ensuring that older people are vaccinated, according to Reuters. Currently, only 19.7% of Chinese seniors have been boosted, and only 50.7% are fully vaccinated.

Meanwhile, Hong Kong today reported 20,082 new cases, along with 206 more deaths. Hong Kong Chief Executive Carrie Lam today acknowledged that tough COVID-19 measures are causing a strain on people and the financial sector and signaled that authorities will revisit the issue next week rather than in the middle of April when the rules are set to expire.