Despite progress, WHO paints 'grim' picture of global TB 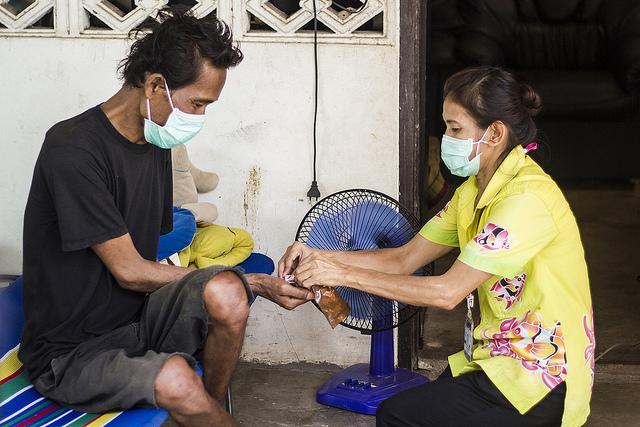 After a 7-year battle with extensively drug-resistant tuberculosis (XDR-TB), a fight that derailed a promising career in business, took him away from his family, and cost him a section of a lung and some of his hearing, Enrique Delgado believes he's one of the fortunate ones.

"Despite all the challenges, I'm lucky to be among the 20% of patients with XDR who survive, and do not suffer 100% side effects," Delgado told an audience today at the National Press Club, where he joined officials from the World Health Organization (WHO), the US Agency for International Development, and the United Nations (UN) to announce the release of the WHO's Global Tuberculosis Report 2017.

Delgado's experience highlights the challenges that remain in the fight against the world's leading infectious disease killer. While the report shows progress against TB has been made, including a 37% reduction in the TB mortality rate since 2000, it also shows that reducing the global burden of the disease will take time. Overall, there were an estimated 10.4 million new cases of TB in 2016, and 1.7 million deaths, including 400,000 people who were co-infected with HIV.

Of the 10.4 million new cases, only 6.3 million were detected and officially notified, a finding that underscores the need for early diagnosis and proper treatment for the disease—considered an essential element of the WHO's End TB Strategy.

Moreover, cases of drug-resistant TB continue to climb. In 2016, there were 600,000 new cases with resistance to rifampicin, the most powerful and effective first-line drug for treating TB. Of these cases, 490,000 were multidrug-resistant (MDR)-TB, with resistance to both rifampicin and isoniazid. And only one in five MDR-TB cases were enrolled in treatment. TB remains the main cause of death related to antimicrobial resistance.

"We estimate that 53 million lives have been saved since the year 2000, over three million of them in 2016 alone," Mario Raviglione, MD, director of the WHO's Global TB Programme, said. "However, despite these achievements, the latest picture is fairly grim."

Raviglione said the progress that has been made to date is not enough to meet the global targets for TB, which include a 90% reduction in TB deaths and an 80% reduction in TB incidence by 2030, compared with 2015.

"The actions we see, the investments we see, is simply not matching the political rhetoric," Raviglione said.

According to the most recent treatment outcome data, success rates are 83% for TB treatment but only 54% for rifampicin-resistant (RR) and MDR-TB and 30% for XDR-TB. While treatment success for drug-resistant TB has risen slightly in recent years, the WHO calls these rates "unacceptably low."

Delgado's battle with MDR-TB started in September 2009 in Panama when he was diagnosed with TB following a business trip. After being treated with first-line drugs, he was declared cured, but relapsed with similar symptoms in 2010. Because proper medication for drug-resistant TB wasn't available in Panama, he was put back on medication that didn't work. That was followed by lung surgery and nearly 2 years of treatment for MDR-TB in Peru.

Delgado was again declared cured in 2013, only to relapse again in 2014. His search for a cure ultimately brought him to Spain, where he underwent 24 months of treatment at a clinic in Barcelona, taking nine different drugs a day and spending more than 2,000 days in isolation. His treatment ended in July 2016 and he is now free of TB, but he was left with physical and psychological scars.

"I will miss the part of my lung that gives me breath forever, I have paresthesia and numbness in my feet, I've lost 20% of my hearing, but I'm at least not completely deaf," Delgado said.

TB is curable when patients receive prompt diagnosis and proper treatment with first-line antibiotics (isoniazid, rifampicin, ethambutol, and pyrazinamide), but treatment lasts for 6 to 9 months, and failure to complete treatment (or receiving improper treatment) can lead to the development of drug-resistant TB. Patients with MDR-TB and XDR-TB—defined as MDR-TB with additional resistance to at least one fluoroquinolone and a second-line injectable agent—are much tougher to treat.

As Delgado learned, treatment options for resistant TB are limited, expensive, and often toxic, and drug regimens can last as long as 2 years.  Aminoglycosides, one of the drug classes in the regimen for MDR-TB, are known to cause hearing loss in patients. The side effects, along with the cost and length of the treatment, can make it difficult for patients to maintain the regimen.

"Loneliness, isolation, frustration, anxiety, and guilt were real battles for me, and the drugs' side effect did not help," Delgado said. "It's easy sometimes to blame patients for stopping treatment, but when so much is already lost and there is no clear future…giving up and even dying can seem like a way out."

One factor that could improve treatment success is increased access to drug-susceptibility testing to ensure patients are receiving proper treatment. The WHO report shows that 39% of the new bacteriologically confirmed and previously treated TB cases notified globally in 2016 were tested for rifampicin resistance, up from 31% in 2015. Among MDR/RR-TB cases notified in 2016, 39% were tested for additional resistance to fluoroquinolones and second-line injectable agents, a slight increase from 36% in 2015.

Wider use of a shorter treatment regimen of 9-12 months, which has reported success rates of 87% to 90% in a select group of MDR/RR-TB patients, could also help. The report says that 35 countries (mostly in Africa and Asia) have reported using this regimen. In addition, 89 and 54 countries have started using the new drugs bedaquiline and delamanid, which have shown promising results in children and adults with resistant TB.

Still, the number of MDR/RR-TB cases enrolled in treatment in 2016 was only 22% of the estimated incidence, and the number of enrollments fell in the 10 highest-burden countries. The WHO says treatment coverage for drug-resistant TB will not improve globally until there is an "intensification of efforts" in the countries with the largest burden. Those countries include China, India, and Russia, which together accounted for 47% of the 490,000 notified cases of MDR-TB in 2016.

Raviglione said gaps in investment—including a $2.3 billion shortfall in funding for TB prevention and treatment and a $1.2 billion shortfall in money for research into new drugs, vaccines, and diagnostics—need to be addressed if the world wants to meet its TB reduction goals. "If we are going to face tuberculosis in the way we should face it, we should invest much more," he said.

He added that there needs to be action beyond the healthcare system to make an impact on global TB numbers, and suggested that efforts to document how the TB epidemic affects the achievement of sustainable development goals could help stimulate political action. Ravglione said he's hopeful that an upcoming WHO summit on TB in Moscow, to be held on Nov 16 and 17, will "lead to the creation of a movement."

Eric Goosby, MD, UN Special Envoy on Tuberculosis, also called for more political commitment. "We have the cure, now we need the will," said Goosby, who previously led the US government's efforts on HIV/AIDS. "We must make it our mission to innovate, accelerate, and advocate."