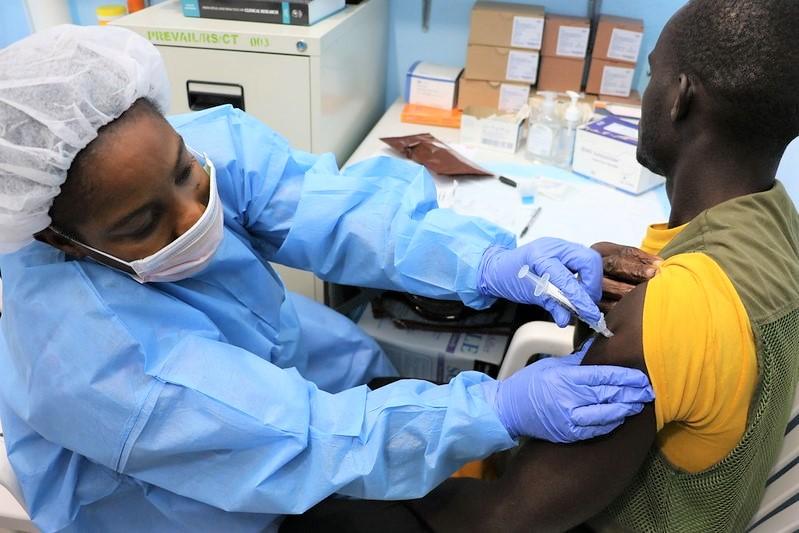 Johnson & Johnson's two-dose vaccine regimen against Ebola is safe and produces a strong immune response in people 1 year old and older, according to two studies published this week in The Lancet Infectious Diseases.

The studies detailed the results of phase 2 randomized, controlled trials in Sierra Leone, which is one of the three countries that was hit hard during the massive 2014-16 West African Ebola outbreak.

Because of these results, Johnson & Johnson received approval and marketing authorization from the European Medicines Agency in July 2020 as well as the World Health Organization's prequalification status in April 2021.

"Although the [existing Merck Ebola vaccine, Ervebo,] requires ultracold chain capacity, despite the two-dose regimen, Ad26.ZEBOV and MVA-BN-Filo vaccines are stable for a long time at refrigerator temperatures (4–8°C), an undeniable advantage for rolling out vaccination in low-income and middle-income countries," write Selidji Todagbe Agnandji, PhD, MD, and Marguerite Massinga Loembe, PhD, in a commentary covering both studies.

"Alongside ring vaccination of index case contacts, front-line workers, and healthcare workers with [Ervebo], the Ad26.ZEBOV and MVA-BN-Filo vaccine regimen is a crucial new tool that would enable rollout of immunisation to at-risk individuals in the general population in mass vaccination campaigns, thus contributing to interruption of virus transmission and limiting the spread of the outbreak."

Immune response 89% and up

The phase 2 trials, called EBOVAC1, took place in the Kambia district in northern Sierra Leone. Both the adult and the child analyses found low frequencies of serious adverse events following vaccination: Less than 1% of adults experienced grade 3 solicited adverse events and 1% of children 13 to 17 years did.

The adult portion of the trial took place from September 2015 to July 2018 and looked first at 43 adults in an open-label preliminary stage and then at 400 adults divided 3:1 among the vaccine group or a control group (a meningococcal quadrivalent [four-strain] conjugate vaccine followed by a placebo). Data showed that 98% of the vaccinated adults 18 to 69 years old developed immune responses 21 days after the second vaccination (geometric mean binding antibody concentration 4,784 ELISA units per milliliter [EU/mL] in stage 1 and 3,810 EU/mL in stage 2.

Participants in the first group were also offered a booster shot of the Ad26.ZEBOV vaccine 2 years later, which prompted a strong antibody response within a week.

"These findings support the additional strategy of providing an Ad26.ZEBOV booster to previously immunised individuals at the start of an Ebola virus disease outbreak," said co-first author on the adult paper, Daniela Manno, MD, in a London School of Hygiene & Tropical Medicine (LSHTM) press release.

To date, more than 250,000 people participating in clinical trials and vaccination initiatives have received at least the first dose of the Johnson & Johnson vaccine regimen, according to the LSHTM press release. Future studies will look at inoculating infants under 1 year old as well as immune responses 5 years after vaccination.