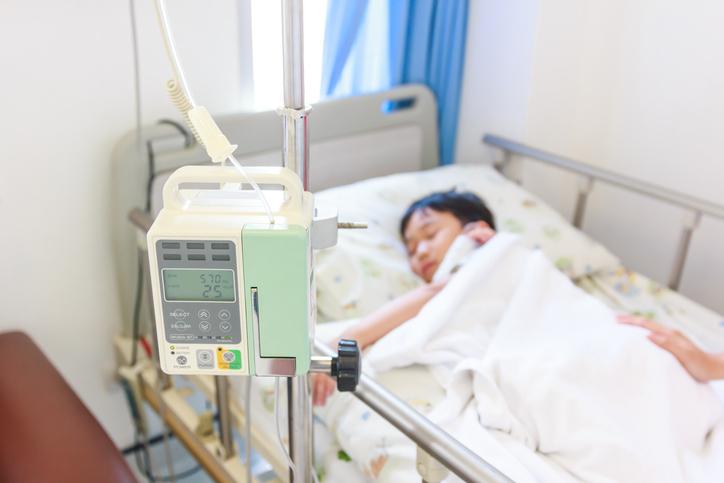 In a letter published in The Lancet Infectious Diseases, researchers say clinical isolates—including one Escherichia coli and five K pneumoniae—from six patients with pneumonia admitted to a pediatric leukemia ward in Guangzhou, China, were found to harbor the colistin-resistance gene. The isolates were collected between December 2015 and January 2016.

In addition to colistin, which is considered a last-resort antibiotic, the six isolates were resistant to several other antibiotics, including polymixin B, cefotaxime, and gentamicin. The five K pneumoniae isolates were additionally resistant to ceftazidime, cefepime, amikacin, fosfomycin, and ciprofloxacin.

The patients were treated with combinations of several different antibiotics, including vancomycin, lincomycin, imipenem, and cefotaxime. Two of the patients, who ranged from 2 to 6 years old, died from their infection. The others recovered.

Genetic testing revealed that all five of the K pneumoniae isolates were clonally related and belonged to the sequence type ST11, while the E coli isolate belonged to ST156. In all of the isolates, MCR-1 was found to be located on transferable plasmids. These small, floating pieces of DNA can transfer resistance genes to different types of bacteria. The isolates were found to carry a variety of resistance genes.

"In conclusion, we identified a hospital outbreak of an MCR-1-producing K pneumoniae ST11 strain among children with acute leukaemia," the authors write. "Our finding suggests that MCR-1 can spread in the hospital environment in the absence of colistin use."

The study's first author, Guo-bao Tian, PhD, of Sun Yat-Sen University's Zhongshan School of Medicine, confirmed with CIDRAP News that this is the first reported hospital outbreak of MCR-1 and that he and his colleagues continue to monitor for new cases.

The letter comes from the same research team that initially identified the MCR-1 gene in E coli samples from pigs, pork products, and humans in China in 2015. The detection of the plasmid-mediated gene, which was thought to be a product of widespread colistin use in Chinese agriculture, raised concern about the potential for the emergence of multidrug-resistant "superbugs" that are essentially untreatable with current antibiotics. China banned use of the drug in animal feed in 2016, based in part on the findings of that study.

In January of this year, the team reported in The Lancet Infectious Diseases that MCR-1 had been detected in E coli and K pneumoniae isolates collected at two hospitals in China's Zhejiang and Guangdong provinces from 2007 through 2015. Although the prevalence of the gene was low, the findings documented the spread of MCR-1 to the clinical setting in China. Chinese hospitals did not use colistin in patients until this year.

Timothy Walsh, DSc, lead author of that study and a professor at Cardiff University in Wales, said at the time that he was concerned that clinical use of colistin in China would lead to more colistin-resistant infections in humans. "The spread of colistin-resistant bacteria will likely worsen when the drug is introduced in humans," he said in a press release. (Walsh is a co-author on the current study.)

Since MCR-1 was first identified, it has been detected in isolates from animals, food products, and humans in more than 30 countries, including the United States.

Although the US Centers for Disease Control and Prevention would not comment directly on the paper, the agency said in an e-mail, "The mcr-1 gene vividly illustrates the many domestic and global challenges facing us as we work to contain the spread of antibiotic resistance and improve antibiotic use."