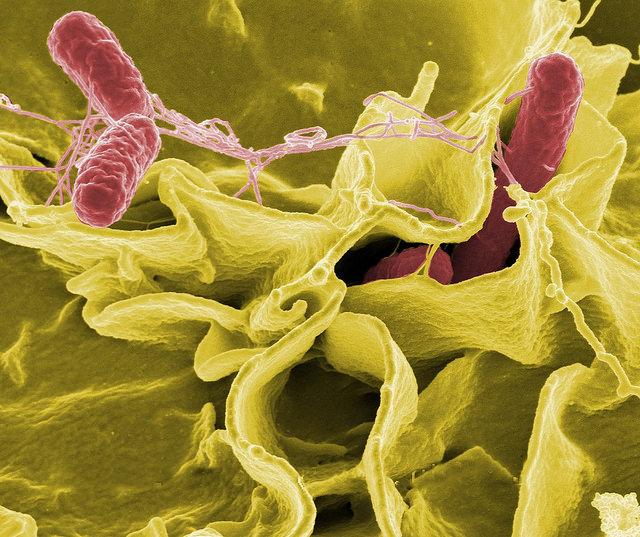 A team of Canadian scientists has identified a gene that confers resistance to the broad-spectrum antibiotic fosfomycin, according to a study yesterday in Antimicrobial Agents and Chemotherapy.

The gene, dubbed fosA7, was found in 15 Salmonella enterica isolates from broiler chickens in British Columbia. The isolates were of the Salmonella Heidelberg serotype, which is commonly identified in poultry and has become one of the leading causes of salmonellosis in humans. In recent years, Heidelberg strains have become more resistant to antibiotics, limiting therapeutic options. The gene was also found in three other Salmonella serotypes—Agona, Montevideo, and Tennessee.

Although polymerase chain reaction (PCR) testing showed that the gene was exclusively located on the chromosome of the Salmonella Heidelberg isolates, the concern is that fosA7 could potentially be spread to other strains of Salmonella and other families of bacteria if transferred to plasmids—small, floating pieces of DNA that can be shared among bacteria through a process known as horizontal gene transfer.

"If it's on the chromosome, and it jumps to the plasmid, and the plasmid gets into another [type of bacteria], then the situation becomes worse," corresponding author Moussa Diarra, PhD, a research scientist with Agriculture and Agri-Food Canada, told CIDRAP News.

Increased use of fosfomycin in human and veterinary medicine would then increase the prevalence of the gene.

To see whether fosA7 could be transferrable, the scientists made a clone of the gene and copied it onto a plasmid inserted into a sample of the Salmonella serotype Enteritidis. Antibiotic susceptibility tests on the modified Enteritidis strains showed that a more than 256-fold increase in the minimum inhibitory concentration (MIC) of fosfomycin was needed to prevent growth of the bacteria.

"These results further suggest the fosA7 is responsible for fosfomycin resistance and if transferred on plasmids, it can induce a high level of resistance in the recipient bacterial strain," the authors write.

Fosfomycin is an older, well-tolerated antibiotic with activity against both gram-positive and gram-negative bacteria. It has been used to treat a variety of human infections, including urinary tract infections, and is considered a safe alternative for treating infections caused by multidrug-resistant bacteria, including those caused by Salmonella. The existence of a gene that could lead to the failure of fosfomycin would be highly problematic.

"It's an important antibiotic," Diarra said. "If we have resistance to it, too, then [treatment] becomes complicated."

As a result, Diarra and his colleagues call for "vigilant monitoring" for the spread of fosfomycin resistance in bacteria isolated from humans and animals.

Nontyphoidal Salmonella causes an estimated 1.2 million foodborne illnesses and about 450 deaths each year in the United States, according to the Centers for Disease Control and Prevention. The agency's most recent estimate of antibiotic-resistant Salmonella infections put the burden at 6,200 cases annually.