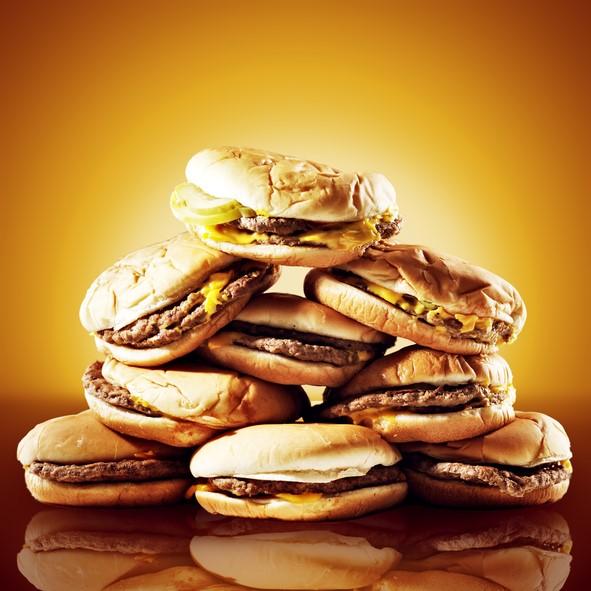 A new report on antibiotic use in the burger industry gives all but three chain restaurants a failing grade.

Wendy's was the sole large burger chain to get a passing grade, receiving a "D-" for buying 15% of its beef from producers that have reduced the use of the medically important antibiotic tylosin in cattle by 20%. Wendy's and Shake Shack (for a portion of its supply) are the only chains to use independent third-party auditors to verify compliance with their policies.

Previous Chain Reaction scorecards have graded the nation's largest restaurant chains on antibiotic policies and practices in all meat served. Matt Wellington, co-author of the report and director of the US PIRG (Public Interest Research Group) Education Fund's antibiotics program, says the new report focuses specifically on hamburgers because the beef industry accounts for 43% of the medically important antibiotics sold for use in food-producing animals, and a significant amount of that beef ends up as burgers.

"We know, based on the latest FDA [Food and Drug Administration] data that the beef industry buys the most medically important antibiotics out of any meat sector, so clearly that's an area where we need to make progress in reducing antibiotic use," Wellington told CIDRAP News. "As some of the largest beef buyers in the US, burger chains are really in the position to effect that kind of change."

The lack of policies around antibiotic use in beef at most chain restaurants is in marked contrast to the commitments that many chains have made on serving chicken raised without medically important antibiotics. To date, several of the nation's largest fast food and fast casual chains have committed to a level of responsible antibiotic use in their chicken supply. Wellington credits that change to consumer demand.

"The role of the consumer is incredibly powerful, and we've seen it work before on this issue," he said. "Consumer demand for chicken raised without routine antibiotic use, and concerns around the issue, helped drive some of the biggest restaurant chains to commit to no longer sourcing chicken raised with routine antibiotics, and that rippled throughout the chicken industry."

But Wellington added that for significant changes to occur in the beef industry, one of the very large burger chains, like McDonald's, will have to make a commitment. "They are the largest purchaser of beef in the United States," he said. "So if anybody is going to make this change happen and spark an industry-wide change to use antibiotics more responsibly in the beef industry, it will be McDonald's."

The new report—produced in conjunction with the Natural Resources Defense Council, Consumer Reports, Friends of the Earth, Center for Food Safety, Food Animal Concerns Trust, and Keep Antibiotics Working—calls on fast food companies and meat producers to adopt the position of the World Health Organization (WHO), which in 2017 recommended that medically important antibiotics not be used for growth promotion or disease prevention in livestock and poultry. The WHO, along with many infectious disease and public health experts, contends that such use is inappropriate and contributes to the spread of antibiotic resistance.

Although the use of antibiotics for growth promotion has been banned by the FDA, US producers are still allowed to use antibiotics for disease prevention. "Eventually, we need to have strong federal policy that restricts the use of medically important antibiotics only to treat sick animals or to control a verified disease outbreak," Wellington said.

Approximately 70% of all medically important antibiotics in the United States are sold for use in food-producing animals.

Practices to reduce antibiotic use

The report goes on to recommend changes that beef producers could make in how they raise cattle that would reduce the need for routine antibiotics. Among those changes are vaccinating cattle, using non-veterinary treatments to prevent disease, and keeping cattle on pasture as long as possible to reduce the risk of infections commonly associated with feedlots.

According to the report, about 80% of cattle slaughtered in the United States come from feedlots, where calves are shipped after weaning and live the rest of their lives. And the problems begin on the journey to the feedlot. Moving the animals can cause stress that increases the risk of bovine respiratory disease complex, also known as shipping fever. Fluoroquinolone antibiotics are commonly used in cattle to prevent the illness.

"Shipping fever is one of the most economically impactful diseases of cattle for cattle farmers," said Matt Ferreira, DVM, MPH, a veterinarian with the section of infectious diseases at the University of Chicago Department of Medicine. "It occurs when an animal is stressed and is usually associated with housing and transport."

Other feedlot-associated illnesses that cattle producers commonly use antibiotics for include calf scour (diarrhea) and liver abscesses, which can be caused by poor feedlot diets. Ferreira agrees that there are other ways to address these conditions.

"These can all also be effectively prevented via other means that require no routine uses of antibiotics," Ferreira said. "These methods include colostrum, vaccination, probiotics, biosecurity, preconditioning, and diet manipulations. Many of these changes are already seen on organic farms in the United States, where the use of antibiotics is much more strictly limited."

Although reducing antibiotic use in beef cattle will present a different set of challenges than it does in chicken, which have much shorter lives (42 days compared with 12 to 24 months) and less exposure to stress and infection risks, Ferreira said the same major principles apply. "Reduced antibiotic use in food animals is possible through targeted improvements in animal husbandry, biosecurity, and preventive care," he said.