Report: US pigs consume nearly as many antibiotics as people do 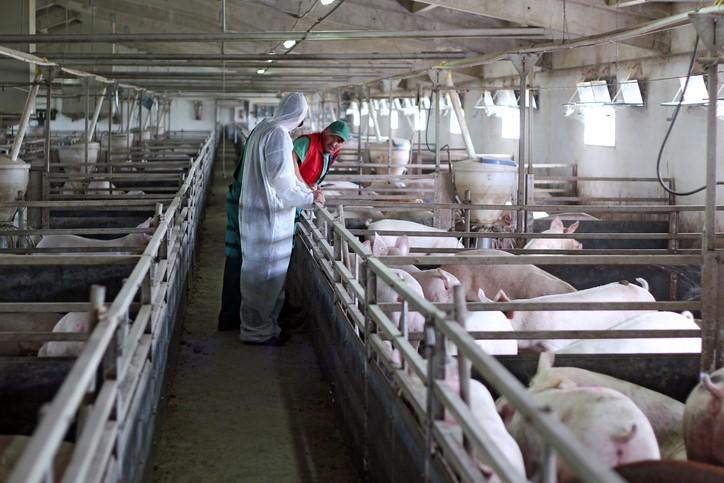 A report today from the Natural Resources Defense Council (NRDC) is taking the US pork industry to task for irresponsible use of medically important antibiotics, saying the amount of antibiotics used in pigs is nearly the same as that used to treat humans.

Report author David Wallinga, MD, a senior health officer with NRDC, told CIDRAP News that the findings are "startling and important for anybody that cares about continued effectiveness of these drugs for treating sick people."

The NRDC is calling for the pork industry to adopt responsible antibiotic use practices and for pig producers to use antibiotics only for pigs that have been diagnosed with a bacterial infection, to control disease outbreaks among pigs that come in contact with sick animals, and or for routine medical procedures like surgery.

"Medically important antibiotics should not be used routinely when animals are not sick," the report concludes.

The report also points out that US pork producers use more antibiotics than do pork producers in other developed nations. Using a methodology that enables comparison between countries with pork industries of different sizes, NRDC calculated that US producers use twice the antibiotics per kilogram of pig as are used in the United Kingdom, and more than seven times the amount used in Denmark and the Netherlands.

"The United States is a real outlier, compared to other major pork-producing countries," Wallinga said.

Although the FDA reports to date have not contained information on how farmers use antibiotics, the 2016 report indicates that 95% of sales of medically important antibiotics for livestock and poultry were additives to animal feed and drinking water. The NRDC notes that this is the typical route through which antibiotics for disease prevention are administered.

The NRDC, along with other infectious disease experts and public health groups, argue that that administering antibiotics to herds and flocks at low levels to prevent disease heightens the risk of antibiotic resistance by increasing the selection pressure for resistant bacteria. Defenders of the practice, including the US Department of Agriculture (USDA) and the American Veterinary Medical Association, argue that using antibiotics for disease prevention and control is important for animal and human health and for food security.

The report comes amid growing global calls to reduce the use of medically important antibiotics in food-animal production. Last week, the head of the United Nations Food and Agriculture Organization, Jose Graziano da Silva, PhD, said the use of medically important antibiotics for growth promotion should be "phased out immediately" and that the use of antibiotics for disease prevention should be limited. In November 2017, the World Health Organization issued a report recommending similar measures.

The NRDC says the widespread use of antibiotics in pig production is turning pig farms into a reservoir for antibiotic-resistant bacteria that can be transmitted to humans through a variety of routes. Those routes include consumption of contaminated pork or direct contact with soil, water, and air on farms where pig manure has been spread.

As an example of how resistant bacteria on farms can spread to humans, the report cites the rise of a livestock-associated strain of methicillin-resistant Staphylococcus aureus (MRSA) in pig-farm workers, and their families, in several countries.

There's also concern that the reservoir of resistant bacteria on pig farms is an environment in which highly mobile resistance mechanisms can emerge and spread. A 2016 study by researchers from The Ohio State University identified several samples of bacteria carrying a gene that confers resistance to carbapenems, which are critical for treatment of multidrug-resistant mechanisms. The isolates carried the gene on a highly mobile piece of DNA called a plasmid that can spread to a broad range of bacteria.

The NRDC links the overuse of antibiotics in pig production to the growing consolidation of the industry, which concentrates more pigs on fewer farms. This model, they say, makes pigs and pig farms more vulnerable to disease outbreaks, and results in producers using more antibiotics to mitigate the risk of an outbreak. Yet at the same time, Wallinga notes, USDA swine farm surveys have shown that viral infections like swine flu and porcine respiratory and reproductive syndrome, which can cause subsequent bacterial infections, have become more prevalent on pig farms.

Wallinga said the US pork industry can learn from two of Europe's largest livestock producers, Denmark and the Netherlands, which raise pigs in similar conditions to US producers. Since 2009, antibiotic use in pig production has fallen by 27% in Denmark and 57% in the Netherlands.

"Those countries have pig industries that are industrial scale, just like the United States, and yet they've made changes that have allowed them to significantly reduce their use of antibiotics," he said. These changes have included better nutrition, better hygiene, different weaning techniques, and strategies to reduce stress on the pigs, which can lead to sickness.

"Any one of those is pretty small, but you add them all up together, and you end up with huge decreases in your use of medically important antibiotics," Wallinga said. "I would say that's a big lesson from this report."

Wallinga also said he's hopeful that consumer demand for pork raised without antibiotics will have an impact on the pork industry, much as it has in the poultry industry. NRDC estimates that more than half of the chicken industry, long synonymous with antibiotic overuse, is now antibiotic-free or using antibiotics more responsibly. This shift has been driven by large producers like Perdue and Tyson responding to customers.

"We need more of that leadership from the pork industry," Wallinga said.

Nov 7, 2017, CIDRAP News story "WHO calls for an end to antibiotic use in healthy animals"