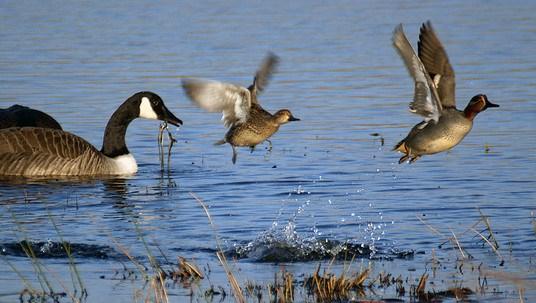 The H5N2 avian influenza virus has made its Kentucky debut with a detection in two wild waterfowl, federal officials announced today, signaling the pathogen's easternmost appearance in the United States.

In addition, Wisconsin reported its seventh H5 avian flu outbreak, on a Barron County turkey farm, while Minnesota's H5N2 outbreak count climbed to 56 with another turkey event in Stearns County.

The H5N2 virus was found in a dead goose and duck in McCracken County, near Kentucky's western tip, the US Department of Agriculture's (USDA's) Animal and Plant Health Inspection Service (APHIS) announced.

Kentucky is the easternmost state to report the virus, although it has struck three poultry farms in southern Ontario, not far from Toronto. The find brings it closer to big poultry-producing areas on the East Coast, including Delaware and Maryland.

H5N2 has also been reported in wild birds, mostly waterfowl, in Washington state, Oregon, Idaho, Missouri, Kansas, and Wyoming in the past few months, according to a USDA list of detections. In addition, the virus has been found in captive raptors in Missouri, Montana, Idaho, and Washington, according to a separate USDA list.

Samples from the Kentucky birds were tested by the Southeastern Cooperative Wildlife Disease Study at the University of Georgia and confirmed by the USDA's National Veterinary Services Laboratories (NVSL) in Ames, Iowa, the agency said.

In Wisconsin, an H5 outbreak hit a farm with 108,000 turkeys in Barron County in the northwestern part of the state. The Wisconsin Department of Agriculture, Trade and Consumer Protection (DATCP) called it the county's third outbreak as well as the state's seventh, leaving little doubt that confirmation of H5N2 is expected.

The first Wisconsin outbreak surfaced on a chicken farm in Jefferson County on Apr 13, and more have since been reported there and in Barron, Juneau, and Chippewa counties, with a total of nearly 1.4 million birds affected, the DATCP said.

The new Minnesota outbreak involves a farm with 27,000 turkeys in Stearns County, marking the county's 10th event, according to information from the Minnesota Department of Public Safety (DPS) and the Minnesota Board of Animal Health (MBAH).

The count of birds affected in Minnesota has reached 3.83 million at 56 sites in 18 counties, according to the MBAH. Bird counts for some of the outbreaks have not yet been completed.

In other news, North Dakota announced a precautionary ban on movement of birds to shows and sales that involve mingling of birds from different locations. The State Board of Animal Health said the ban "does not apply to approved private sales that meet North Dakota importation requirements."

"The state board is taking this precaution to reduce the risk of avian influenza exposure to North Dakota birds," State Veterinarian Susan Keller, DVM, said in the statement. "Mixing birds could unnecessarily increase the risk of exposure."

North Dakota has had two H5N2 outbreaks in the neighboring southeastern counties of Dickey and LaMoure.

USDA list of H5N2 and H5N8 detections in wild birds

USDA APHIS list of outbreaks, including detections in captive raptors