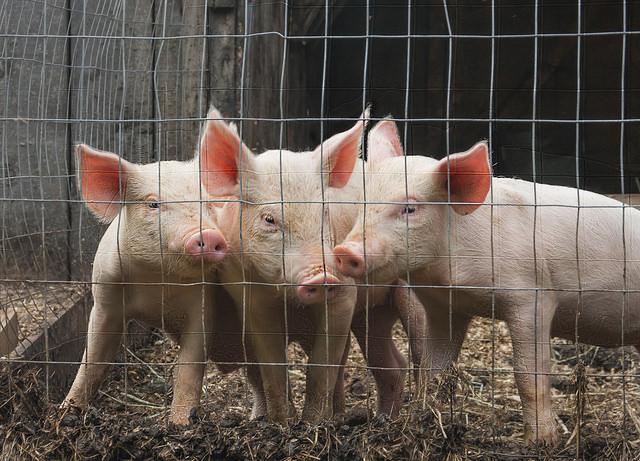 Tests on the most common type of influenza found in Chinese pigs reveal that it has the potential to transmit easily in humans, posing a pandemic threat similar to the virus that triggered a pandemic in 2009 after jumping from swine to people.

A research team from China and Japan isolated 139 Eurasian avian-like H1N1 swine influenza viruses during surveillance in Chinese pigs from 2010 to 2013, then put the virus through its paces to assess its pandemic threat, including experiments in ferrets to gauge transmissibility in mammals. They reported their findings yesterday in Proceedings of the National Academy of Sciences.

One of two swine H1N1 lineages, Eurasian avian-like H1N1 (EAH1N1) swine influenza viruses (SIVs) has been circulating in pigs in several Eurasian countries since 1979 and has infected several humans in Europe and in China, one fatally in China in 2011. Little is known about its evolution and properties, however, which researchers said prompted the study.

The team noted that China is the world's largest pork-producing country and that flu viruses can spread easily once introduced to the unvaccinated herds.

For the surveillance part of the study, investigators sampled more than 34,000 pigs from 24 Chinese provinces. Of 228 SIVs isolated from the pigs, EAH1N1 was by far the most common strain and was found in 10 of China's provinces.

Genetic sequencing found that the strains formed five genotypes and fell into two antigenic groups, both distinct from the 2009 H1N1 virus: A/swine/Guangxi/18/2011 and A/swine/Guangdong/104/2013.

Other tests on the EAH1N1 SIVs showed that they preferentially bind to human-type receptors. The team also found that 9 of 10 viruses they tested transmitted by respiratory droplets in ferrets, considered the best experimental model for human flu.

The authors said the virus might be able to replicate well in humans and cause notable disease, based on mutations the group found on the virus' PB2 protein genes. Like the 2009 H1N1 virus, EAH1N1 SIV doesn't cause severe disease in pigs but may cause more notable disease in humans, they observed.

Experiments to assess whether humans have any immunity to the viruses showed a small degree of antibody response to A/swine/Guangxi/18/2011, but none of the 159 people tested had neutralizing antibodies against A/swine/Guangdong/104/2013 in their blood.

Antibody findings and an earlier study that found no substantial cross-protection from seasonal flu vaccine against EAH1N1 SIV suggest that humans aren't likely to have much preexisting immunity to the virus, the team concluded.

Using a US Centers for Disease Control and Prevention risk assessment tool to look at the pandemic potential of influenza viruses, the researchers found that EAH1N1 SIV scored the highest of six viruses, which also included H5N1, H9N2, variant H3N2, H7N9, and avian H1N1. The result suggests that EAH1N1 SIVs "may pose the highest pandemic threat among the avian influenza viruses currently circulating in animals," they wrote.

Michael Osterholm, PhD, MPH, director of the University of Minnesota's Center for Infectious Disease Research and Policy (CIDRAP), publisher of CIDRAP News, praised the study and said the findings are "very sobering."

He said it may be a wake-up call that alerts the world to a virus that has pandemic potential similar to the one that emerged in 2009. He said that although the research community has been watching flu viruses in pigs and poultry since the 1990s, the emergence of the pandemic virus in 2009 caught it by surprise.

Based on the new findings, studies are urgently needed to see if current vaccines or vaccine seed stock show any protection against EAH1N1 SIV, Osterholm said.

"This is why we need game-changing influenza vaccines," he added, noting that if another pandemic emerged tomorrow, the world would likely be faced again with too little pandemic vaccine, too late, offering, at best, moderate protection.