USDA at work on poultry vaccine for H5N8, H5N2 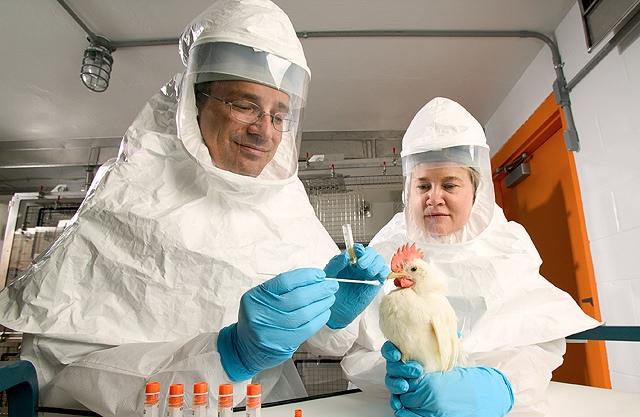 With the highly pathogenic avian flu (HPAI) strains H5N2 and H5N8 threatening US poultry flocks, the US Department of Agriculture (USDA) has begun developing a vaccine as a backup tool to protect them, just in case the standard containment measures fail.

David E. Swayne, DVM, PhD, director of the USDA Agricultural Research Service's Southeast Poultry Research Laboratory in Athens, Ga., said he and his colleagues are working on a virus seed strain for a vaccine to combat the two viruses.

But senior officials at the USDA's Animal and Plant Health Inspection Service (APHIS) hope such a vaccine will never be needed, because that would probably mean the various precautions to keep the virus from spreading from farm to farm were not working.

The new H5N2 virus—an offshoot of the H5N8 strain, which came from Asia—has hit turkey flocks in Minnesota, Missouri, and Arkansas and a backyard poultry flock in Kansas this month. (See Flu Scan today on new Minnesota outbreak.)

In January the H5N8 strain struck a California turkey farm, and in February it hit a chicken farm there. The outbreaks prompted many countries to bar imported poultry products from the affected states.

So far, each outbreak has affected only a single farm or backyard flock, with no spread to neighboring farms.

T. J. Myers, VMD, associate deputy administrator of APHIS Veterinary Services, noted that the agency has a strong emphasis on prevention when it comes to avian flu. That includes a long-standing HPAI response plan, complemented by the National Poultry Improvement Plan, which includes state response plans for both HPAI and low-pathogenic avian influenza (LPAI). The program also includes preventive standards for live-bird markets.

"The question of vaccine does come up, but really we don't want to get to the point where we'd use a vaccine, because it'd probably be most beneficial in a situation where you had uncontrolled lateral spread to other farms, and you might want to vaccinate around that area to provide some containment," he said. "We're really geared up to prevent that from occurring. If you look at the cases over the past few months, we've had rapid responses, and we've not seen any farm-to-farm spread. We've just had point-source introductions from the wild."

"Though we don't see a real need for a vaccine response, we always want to make sure we have as many tools as we can, and Dr. Swayne's lab is very good at evaluating any new viruses that come along and looking at the vaccines we have, to see if they provide protection," Myers added.

Prototype vaccine to be tested

At the Georgia lab, said Swayne, "We have a prototype strain already made, and it's just going into a vaccine study in chickens." If it appears effective, it would be turned over to APHIS, he added. "APHIS would have to decide if there would need to be a vaccine available in the field."

"We tested multiple seed strains, ones from North America and ones from Asia," he said. "These are seed strains that can be used to make licensed vaccines or have been used experimentally."

The new seed strain is a low-pathogenic virus that includes the hemagglutinin (H) component of the H5N2 and H5N8 viruses, which is the same in both viruses, Swayne noted. If the strain is used to make a vaccine, the virus would be inactivated.

In testing the vaccine, Swayne's team will find out if it generates antibodies in chickens, and those antibodies will be studied, he said. Further, vaccinated chickens will be challenged with the field virus to see how well the vaccine prevents viral replication and spread.

The challenge studies must be done in high-containment conditions to keep the field virus from escaping, Swayne said. The lab has "biosafety level 3 enhanced" facilities for that purpose.

Not an instant process

If a decision were made to deploy a vaccine, it would take time to bring it into the field, according to Byron Rippke, director of the Center for Veterinary Biologics at APHIS.

As Rippke explained the procedure, Swayne's lab would supply the seed strain to a manufacturer, which would apply to APHIS for a license. He said the agency would expedite the process as much as possible, which would probably mean granting a conditional license. Typically that's based on an evaluation of the product for safety and purity, "and some minimal evaluation on the efficacy end of it," he said, adding that with avian flu vaccines the serologic response usually correlates well with effectiveness.

Rippke said that the time for bringing a vaccine into the field varies, depending on the technology used, but with a typical killed virus that's grown in eggs, as most human flu vaccines still are, "you might be talking about 9 months to a year. There are some other technologies that have more recently become available that might be able to shorten the time frame."

USDA officials said poultry vaccines against H5 and H7 viruses—the subtypes that can mutate from low-path to high-path—have rarely been used in the United States. The last time that happened was in Connecticut in 2003, when a low-path H7 virus hit a very large egg farm that supplied a wide area.

The standard approach would've been to destroy all the chickens and start over, but in that case the decision was to use a vaccine, since the virus was low-path and because culling all the chickens would've had a big impact on the egg supply, Myers explained. The chickens were replaced house by house, the houses were disinfected, and all the replacement birds were vaccinated, he said.

David Halvorson, DVM, an avian health expert who is retired from the University of Minnesota, agreed that H5 and H7 avian flu vaccines have not been used in the United States for many years, but he noted that vaccines for swine flu subtypes H1 and H3 are commonly used in turkeys.

Myers and Rippke explained that some turkeys are still reared outdoors, where they may be vaccinated because of their possible exposure to wild birds. They said some operators use commercial swine flu vaccines, which can be protective against wild-bird strains of the same subtype.