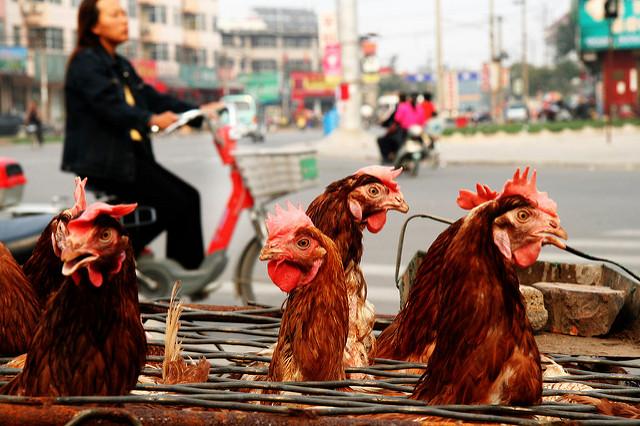 An early, brisk spike in H7N9 avian flu infections in China, which is in its fifth wave of activity, has now reached at least 347 cases, passing the record 319 of infections seen in the second wave during the winter of 2013-14, just months after the first human cases were detected.

In a related development, the World Health Organization (WHO) weighed in on China's recent H7N9 activity today with a new analysis, which said the agency doesn't see any changes with the transmission pattern or the properties of the virus.

Earlier this season Chinese researchers said the country was experiencing an early H7N9 season, which saw 6 cases in November, then a sharp climb to 106 cases in December. They said an increase in virus detections in poultry, especially at live markets, might be fueling the surge in human cases, but they added that an early start to the general flu season could also play a role.

On a week-to-week basis, it's been difficult to tell if H7N9 cases in China are still rising or have peaked. Some provincial health departments announce individual cases as they are confirmed, while others wait to include them in their monthly communicable disease updates.

The most reliable official indication, though, came today with numbers reported from the mainland in an update from Hong Kong's Centre for Health Protection (CHP). Since Jan 1 and through Feb 5 the mainland has reported 235 cases, putting the official total so far at 347.

The CHP pointed out that cases exported from Guangdong province have also been reported this season in Hong Kong, Macao, and Taiwan.

Singling out 45 cases reported just for the week spanning Jan 30 to Feb 5, the CHP said cases occurred in eight provinces, though about half were in Zhejiang and Jiangsu provinces. Illness onsets ranged from Jan 16 to Feb 1. Fifteen people reported exposure to poultry or live-bird markets, and the investigation into the virus source is still under way for the rest.

China's Center for Disease Control and Prevention has said 90% of the patients have reported exposure to poultry, especially at live-poultry markets, the CHP said today, urging travelers to the mainland to avoid visits to poultry markets or farms and to avoid buying live or freshly slaughtered poultry and handling live poultry or other birds or their droppings.

Meanwhile, new cases continue to be reported by provincial health departments. Henan province today reported an H7N9 infection in a 35-year-old woman from the city of Nanyang, according to a government statement translated and posted by FluTrackers, an infectious disease news message board. The woman, who has a mild illness, works as a farmer and is involved in poultry slaughtering.

WHO analysis on epidemiology, virology

In a new analysis today, the WHO said live-poultry market sampling in Guangdong province in December yielded 9.4% positive tests, with the level for H7 in Jiangsu province even higher, at 15.8%, most of it H7N9.

The agency noted that China has seen similar sudden increases in H7N9 activity in previous years, but the geographic spread is wider during the current fifth wave. According to the WHO, three clusters have been reported among the latest infections—a level similar to past seasons. So far the WHO doesn't see any changes with the epidemiology of the disease.

The population immunity to H7N9 in China is still very low, with a seroprevalence study in poultry workers in 2015-16 showing 0.17% positivity.

Genetic analysis of recent strains from China and Hong Kong haven't shown any known markers for increased virulence or mammalian adaptation, though some showed differences in hemagglutinin substitutions compared with the candidate vaccine virus, which has prompted a review of whether the strain will protect against the currently circulating virus.

Three of 83 viruses tested showed markers for resistance to neuraminidase inhibitors, which are the most common antiviral drugs used against influenza, and testing is under way to gauge in vitro susceptibility.

The WHO also said that it sees no major transmission or virologic changes, and it warned that as long as people are exposed to infected animals, more illnesses can be expected.