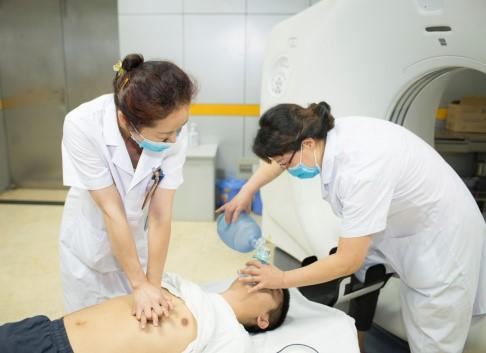 Early data from Wuhan, China, illustrate some similar clinical symptoms between the first 41 hospital cases of novel coronavirus (2019-nCoV) and SARS, while another study today in the same journal details person-to-person and between-city transmission of the virus in six family members.

A third study, meanwhile, estimates that 14% of people hospitalized with a 2019-nCoV infection will die.

The nCoV outbreak came to light in Wuhan in the last days of December and today topped 900 cases globally, with the vast majority in China, though several countries, including the United States (see related CIDRAP News story) have confirmed imported cases.

In the first study, published in The Lancet Infectious Diseases, researchers from Wuhan, Beijing, and China's National Clinical Research Center for Respiratory Diseases describe high rates of respiratory distress, intensive care admission, and abnormal findings on chest computed tomography (CT) in the first 41 patients hospitalized from Dec 16 to Jan 2 in Wuhan, as well as a 15% death rate (six patients died).

Twelve 2019-nCoV patients (29%) developed acute respiratory distress syndrome, and 13 (32%) were admitted to intensive care. All had pneumonia and abnormal findings on chest CT.

"Despite sharing some similar symptoms to SARS (eg, fever, dry cough, shortness of breath), there are some important differences, such as the absence of upper respiratory tract symptoms (eg, rhinorrhoea [runny nose], sneezing, sore throat) and intestinal symptoms, such as diarrhoea which affected 20-25% of SARS patients," explains lead author Bin Cao, MD, from the China-Japan Friendship Hospital in Beijing, in a Lancet news release.

Two thirds of patients (27) had visited the Hunan seafood market that was linked to the first cases in the outbreak. The marked also housed other animals, such as poultry, bats, marmots, and other wildlife. Thirty patients (73%) were men, and patients' median age was 49, with almost half (20) in the 25- to 49-year-old age-group. All were adults.

Twenty-eight of the patients (68%) had been discharged from the hospital by Jan 22.

The authors of the study write, "More efforts should be made to know the whole spectrum and pathophysiology of the new disease."

The second study, also published today in The Lancet Infectious Diseases, features a bit of an epidemiologic smorgasbord: a family cluster, person-to-person transmission, cross-country travel, a child who avoided infection, and another who became infected but had no symptoms.

The study, led by investigators from the University of Hong Kong, also notes that none of the seven family members visited a live-animal market. The researchers conducted genetic analyses of specimens from the family and noted detailed trace-back information.

The first 2019-nCoV patient, a 65-year-old woman from Shenzhen, visited a 1-year-old relative in Wuhan, 550 straight-line miles (890 kilometers) away, on Dec 29. The relative was hospitalized at the time with a fever and pneumonia.

Upon returning to Shenzhen, the woman was admitted to the University of Hong Kong-Shenzhen Hospital (HKU-SZH) on Jan 10 along with her 66-year-old husband, after both of them had developed symptoms.

Clinicians assessed four other family members the next day—a 37-year-old daughter, 36-year-old son-in-law, and their two asymptomatic children—all of whom had also traveled to Wuhan. A seventh family member, the 63-year-old mother of the son-in-law, who had not made the trip but had housed several family members on their return, also fell ill and was admitted to HKU-SZH on Jan 15.

Genetic testing found that five patients were positive for the spike protein that 2019-nCoV uses to enter cells. Of these, researchers identified the complete 2019-nCoV genome in two.

One of the children, who was reported by the mother to have worn a surgical mask for most of the stay in Wuhan, was not infected. The other child was infected with 2019-nCoV but had no clinical symptoms, which suggests people may be able to spread infections without knowing it.

None of the six family members visited food markets or had contact with animals during their stay in Wuhan. The authors say that the most likely explanation for the cluster is that the 65-year-old woman acquired the disease from her 1-year-old relative, then transmitted it to four other family members during their 7-day trip, and to the other mother-in-law after flying home to Shenzhen city in Hong Kong.

All six patients were hospitalized in isolation and remain stable as of Jan 20.

"With the improved surveillance network and laboratory capability developed following the SARS pandemic, China has now been able to recognise this new outbreak within a few weeks and has made the virus genome publicly available to help control its spread," says co-author Rosana Wing-Shan Poon, PhD, from the University of Hong Kong, in the Lancet release. "Learning the lessons from SARS, which started as animal-to-human transmission, all game meat trading should be better regulated to terminate this potential transmission route."

Writing in a related commentary, three infectious disease experts say, "The general public should be motivated to report fever and other risk factors for coronavirus infection, including travel history to affected area and close contacts with confirmed or suspected cases. Considering that substantial numbers of patients with SARS and MERS [Middle East respiratory syndrome] were infected in health-care settings, precautions need to be taken to prevent nosocomial spread of the virus."

In a second commentary, David Heymann, MD, from the London School of Hygiene & Tropical Medicine, says of both studies, "When pieced together, these emerging data will permit regular refinement of the risk assessment, and real-time guidance to countries for patient management and outbreak control, including the best case definition for use in surveillance around outbreak sites and elsewhere."

In an editorial on the two studies, Lancet editors stress the importance of open-access data and say they will make all 2019-nCoV content freely available.

The group employed mathematical modeling based on publically available information, mainly from Wuhan health authorities. Their data included the first 41 hospitalized patients in Wuhan, the first case in Thailand and South Korea, family clusters reported on Jan 15 and 16, 136 new infections reported in Wuhan on Jan 20, and other cases.

Although the authors write, "It is challenging to judge severity from the information available to date," their estimates put the CFR around 14% in hospitalized patients.

They add, "Given that the cases reported outside Wuhan have mostly not been severe, it would be reasonable to infer that there might be a large number of undetected relatively mild infections in Wuhan and that the infection fatality risk is below 1% or even below 0.1%."