Variant COVID among triggers for grim surge in Manaus, Brazil 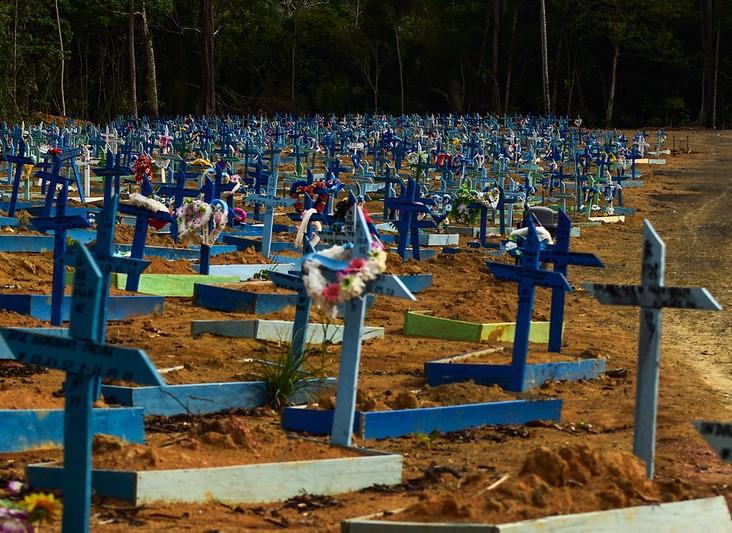 In one of the most puzzling and worrisome developments in the pandemic, scientists are racing to explain what's happening in Manaus, Brazil, a city of 2.2 million at the edge of the country's rainforest that is experiencing a second explosive outbreak, even though the first one was so bad it was thought to have produced herd immunity.

As the situation deepens in Manaus, overwhelming the city's health system again, researchers from Brazil and the United Kingdom yesterday said four possibilities might explain the recent dramatic resurgence, including variant SARS-CoV-2 viruses that arose in Brazil. They published their analysis yesterday in The Lancet.

The city's outbreak last spring stunned the world with images of dead bodies in the streets, people buried in cardboard caskets, and mass graves at local cemeteries. Seroprevalence studies over the summer estimated that 76% of Manaus residents had been infected, above the basic 67% herd immunity threshold.

However, a new surge that began in December has overrun the health system again, which prompted pleas for other countries to help by sending oxygen supplies.

Doctors on the frontlines say the second surge overwhelmed hospitals much faster than the first outbreak and that the patients are arriving at hospitals sicker, leading some to suspect that a new variant is circulating that isn't just more transmissible, it may also be more lethal, according to the Washington Post. Noaldo Lucena, MD, an infectious disease specialist at the Tropical Medicine Doctor Heitor Vieira Dourado in Manaus, told the Post. "This isn't a feeling. It's a fact."

A false sense of security, with some government officials downplaying the threat, going into the Christmas holidays may have also caught Manaus off guard as illnesses started rising again in December, according to the Post.

In the Lancet report, experts said four factors may be at play, some possibly related. First, scientists might have overestimated the attack rate for the first surge, and infections might have been below the herd immunity threshold. Second, immunity in people infected in the first wave may have waned by December, which they said wouldn't fully explain the resurgence.

Another factor could be circulation of SARS-CoV-2 variants, some of which originated in Brazil, that evade immune response from earlier infection with the original virus. And as a fourth possibility, the variants circulating in the second wave might be more transmissible than the virus that fueled the first surge.

The authors referenced the discovery of the P.1 variant in Manaus, which started showing up in December with frequent detections. Though little is known about the variant, it shares mutations with variants from the United Kingdom and South Africa that may make it more transmissible.

The latest epidemiologic update from the Pan American Health Organization (PAHO) had more details about local transmission of P.1 in Manaus, which appears to be based on an analysis of sequencing data by a team based at the Center for Arbovirus Discovery, Diagnostics, Genomics, and Epidemiology (CADDE) Genomic Network and posted on Jan 12 at Virological.org.

The researchers wrote that the P.1 variant wasn't even detected in Manaus until after November, and that in December it made up 52.2% of genotyped samples. In January, the proportion spiked to 85.4%. They also saw a rise of the P.2 variant in December, which was at 25.4% but has since declined to 6% in January.

Emphasizing that the findings are preliminary, the group said P.1 seems to be driving local transmission in Manaus, though P.2 and other lineages may still be circulating.

PAHO said today in a statement on variants circulating in the Americas that mutations are expected, which underscores its advice for countries to continue to strengthen their COVID-19 measures and surveillance of the virus.

Regarding the variant circulating in Manaus and the wider Amazonas region, Sylvain Aldighieri, MD, the group's incident manager, the researchers have suggested a causal link to increased hospitalizations in Manaus, "But it’s still early to conclude on the strength of the association between the emergence of the variant and the recent dynamics of transmission."

In its first local cases in nearly 2 months and in its biggest single-day total, Vietnam yesterday reported 84 new cases in two northern provinces, Hai Duong and Quang Ninh, according to Reuters. State media said cases have also been detected in Bac Ninh province and in Hai Phong, a port city.

Vietnam is among the countries that have won praise for keeping its COVID-19 cases and deaths at very low levels.

The developments prompted a flurry of urgent response actions, including mass testing in the affected areas, halting international flights, and banning gatherings ahead of the Lunar New Year.

The government said some of the cases may be connected to the B117 variant that was first detected in the United Kingdom, according to the New York Times.

In other international headlines: