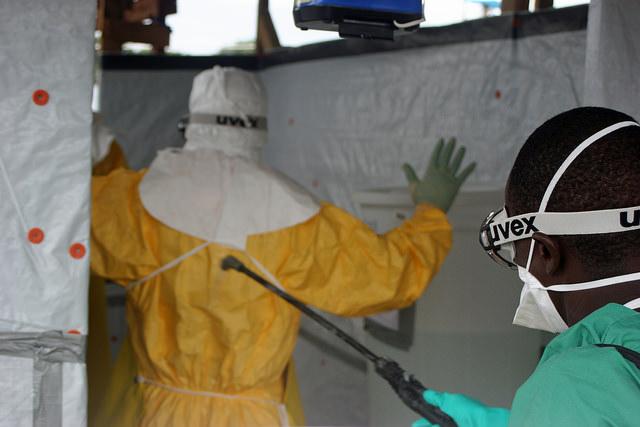 Ebola cases in one of Liberia's hot spots last summer were likely triple that reported by official sources, according to an international group of researchers, part of ongoing analyses on the outbreak that also revealed new findings on disease severity and nosocomial transmission.

The latest studies come as Guinea continues to report a dribble of new cases, with Sierra Leone just days away from joining Liberia as having reached Ebola-free status.

The case estimate covers confirmed, probable, or suspected Ebola cases reported in Liberia's Montserrado County between Jun 1 and Aug 14 of 2014, a time when cases were surging in the area. The authors, from Epicentre in Paris, the US Centers for Disease Control and Prevention (CDC), Liberia's health ministry, and Doctors Without Borders, reported their findings in an Oct 29 letter in Emerging Infectious Diseases.

According to the two databases, 227 Ebola cases were in the health ministry database and 99 were in the Ebola treatment unit's database. However, the group's CRC analysis suggested that there were 876 cases in Montserrado County during the study period. The sensitivity analysis with 5 more cases in common between the databases would drop the estimate to 734 cases, and with 5 fewer, the team estimated that the number would rise to 1,085.

The group concluded that rapid use of similar techniques can help public health officials manage outbreak response, though the method needs further exploration to better understand capture preferences by each source.

Meanwhile, Chinese clinicians who served in Sierra Leone during the Ebola outbreak found that patients over age 40 were more likely to die, as were those with high viral load and diarrhea. The team, who worked at Sierra Leone–China Friendship Hospital in Freetown, reported their findings in an Oct 30 early online edition of the International Journal of Infectious Diseases.

The report covers patients seen at the facility from October 2014 through March 2015. During that time, 288 cases were confirmed, with outcome known for 134.

The case-fatality rate was 73%, which was a little higher than the 70.8% reported overall. The investigators said the fatality rate may have been influenced, for example, by a lack of antiviral drugs for Ebola and a shortage of medical equipment needed to identify the severely ill patients who needed early supportive care.

The researchers saw hemorrhagic symptoms in only 11% of patients, which is consistent with other reports suggesting that bleeding was not as common in West Africa's outbreak compared with earlier Ebola outbreaks elsewhere. However, they found a higher incidence of diarrhea, which was closely associated with higher mortality.

Plasma viral load was also closely associated with survival time in all of the confirmed Ebola patients, and they also saw a higher fatality rate and shorter survival time in older patients, which the investigators said was consistent with earlier reports.

As an aside, the Chinese researchers said it was a challenge protecting staff who worked with Ebola patients, but luckily, none from their staff were infected. They said formulating and strictly enforcing infection control protocol were helpful, as was the experiences the staff had in Beijing during the SARS (severe acute respiratory syndrome) and other outbreaks.

In a third report, a CDC-led research team reported details on two instances of Ebola transmission that occurred in Sierra Leone general hospital wards, one in a pediatrics department and the other on a maternity ward. The group reported its findings Oct 30 in the American Journal of Infection Control.

In the two transmission instances, 82 contacts were identified, 64 of them healthcare workers (HCWs). The group also included 7 non-HCW caregivers, 4 patients, 4 newborns, and 3 children of patients. Seven of the contacts developed symptoms and tested positive for Ebola: 2 HCWs (a nurse and a hospital cleaner), 2 caregivers, 2 newborns, and 1 patient.

Both instances involved gaps in personal protective equipment (PPE) and infection control protocols. In the pediatric department transmission, an infected nurse placed an intravenous catheter in the pediatric index patient with only short-glove PPE.

The authors concluded that delayed recognition and inadequate PPE likely led to the exposures and secondary infections—hospital caregivers did not use adequate PPE, and caregivers weren't offered PPE. They also noted that limiting contact with non-HCWs, improving PPE access, and enhancing screening methods for pregnant woman, children, and other patients would help curb Ebola transmission in general healthcare settings.