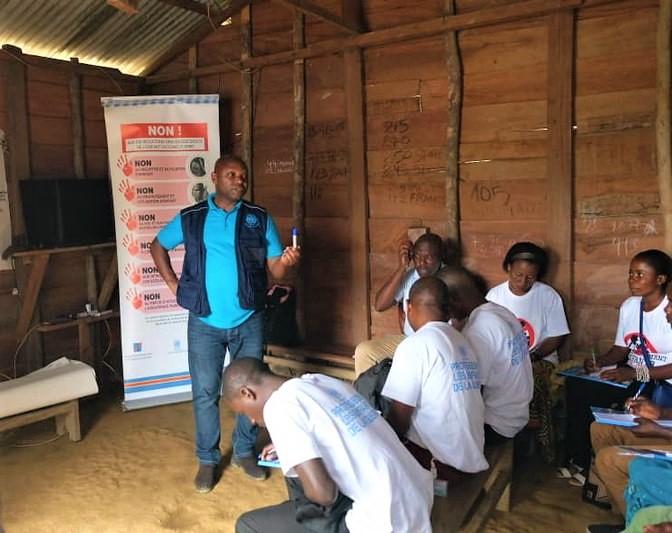 From Oct 28 to Nov 3, only 10 new Ebola cases from five health zones were confirmed in the Democratic Republic of the Congo (DRC), but the World Health Organization (WHO) warns that security issues and poor access continue to hinder the response in rural hot spots.

In the latest situation report on the 14-month-long outbreak—the world's second largest—the WHO said 90% of new cases are linked to transmission chains in the Biakato Mines health area, and 80% of confirmed cases were registered as contacts.

"Cases with a history of travel through or a stay in Biakato Mines have been reported in other health areas of Mandima health zone, as well as other health zones, such as Mabalako and Beni. Secondary transmission in these health zones can be expected in the coming weeks," the WHO said.

The WHO said response workers have been involved in community engagement activities with  37 religious leaders from Biakato Mines to resolve community resistance to response measures.

In the past 3 weeks, Mandima, Mabalako, and Mambasa have remained the epicenters of the outbreak, accounting for 51%, 25%, and 12% of new cases, respectively. Nyankunde health zone has now reached 21 days without new cases.

The overall case-fatality rate of the outbreak remains at 67%. Of the total confirmed and probable cases, 56% are in women, and 28% are in children. A total of 163 healthcare workers have been infected, representing 5% of the total case population.

"Substantive rates of transmission remain in Mandima Health Zone, with smaller clusters elsewhere, which require a concerted effort from all response teams and international partners to control," the WHO concluded in the update. "Movement of symptomatic cases still occurs, so it is critical that all areas of the response remain effective, engaged and fully resourced, with response activities continuing to be scaled and adapted to the evolving local context."

According to the latest information on the WHO's Ebola dashboard, officials confirmed 3 new cases of Ebola today, raising the outbreak total to 3,285, including 2,187 deaths. Officials are still investigation 542 suspected cases.

The DRC's Ebola technical committee (CMRE) provided information on the location of the seven cases reported yesterday. Beni and Mabalako each reported three cases, and Mandima recorded a single case.

The CMRE also notes that, of the two newly recorded deaths in Beni, one was a community death, which raises the risk of transmission.

Finally today, a new study in Clinical Infectious Diseases, reports that 75.5% of Ebola survivors experience at least one new cardinal symptom up to 4 years after infection. Of those who experienced new symptoms, 85.8% said the complications interfered with daily life.

The study was based on surveys of 326 Ebola survivors from Liberia. Survivors reported high rates of joint pain, headache, vision problems, and fatigue.

The authors of the study looked for 26 markers of immune activation and inflammation at quarterly doctor's appointments but found no significant relationship between symptom severity and those markers.