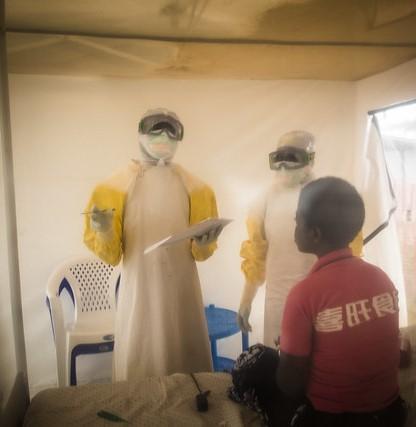 Editor's Note: The original headline for this story was incorrect. Four new cases involve healthcare workers, not necessarily doctors. The headline was corrected later on May 13.

Once again, violent clashes in the Ebola outbreak region of the Democratic Republic of the Congo (DRC) have resulted in a spike of cases. Over the weekend and through today, the DRC's ministry of health recorded 56 new Ebola cases, including 4 in healthcare workers, and 19 new deaths.

The new cases bring the outbreak total to 1,705, including 1,124 deaths. A total of 251 suspected cases are still under investigation. The total number of health workers infected during the outbreak is now 101.

All newly infected health workers, from Mabalako, Kalunguta, Butembo, and Manugurujipa, were unvaccinated. The DRC health ministry reported 13 new cases on May 11, 18 yesterday, and 25 today.

As of today, 114,553 people have been vaccinated against Ebola, including more than 28,000 front-line health workers.

Several cities and villages reported new cases over the last 3 days, including 14 in Kalunguta and 13 in Mbalako. Of the 19 deaths, 15 took place in the community, which raises the risk of further disease transmission.

Two months ago, Doctors without Borders (MSF) withdrew staff from Butembo and Katwa amid increasing security threats, and the operation of Butembo and Katwa's Ebola treatment centers (ETCs) transferred to the ministry of health, the World Health Organization, and UNICEF.

Yesterday the ministry of health published an evaluation of ETC activity, which showed that the average duration of hospital stays has decreased since MSF left the region, with lengths of stay in Butembo going from an average of 9 to 7 days, and stays in Katwa shortening from 7 to 5 days.

The ETCs are now more heavily staffed, the ministry of health said.

"From now on, the whole of the medical staff is Congolese and has been recruited locally," the ministry said. A dedicated admissions staff, more psychologists, and a nutritional care team have also been added to the ETCs.

Moreover, survival rates increased at both ETCs. Excluding patients who die within 48 hours of admission, the case-fatality rate for confirmed patients decreased from 43.4% to 31.1% in Butembo, and from 43.2% to 33.8% in Katwa.

Cure of baby, death of assailant

The DRC health ministry yesterday also noted a different success story. Officials said a 42-day-old baby was discharged from the Katwa ETC that day. The baby girl was admitted to the treatment center on Apr 11 with her mother, who died the next day.

"After 30 days of treatment with mAb 114 [a monoclonal antibody', Daniella was cured," the DRC said. "She survived thanks to the work of the health staff and the nannies who took turns at her bedside 24 hours a day but also because she was taken care of as soon as she became ill."

And the health ministry today in its daily report confirmed the death of a man in Butembo who was a suspected member of a local militia group attacking a treatment center. He was killed by security forces.

Also today, the European Union announced it would be donating another €5 million ($5.6 million) to the DRC, raising the total number of funds to the outbreak to €17 million ($19.1 million), the European Commission (EC) said in a news release.