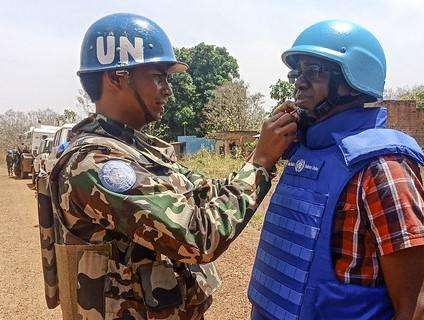 Yesterday the Allied Democratic Forces (ADF), a rebel group, attacked two villages near Beni, killing 12 people who live in the heart of the Democratic Republic of the Congo's (DRC's) ongoing Ebola outbreak.

The terrorists killed nine in Eringeti and three in Oicha, according to Reuters. ADF has not publically pledged allegiance to the Islamic state (ISIL), but that hasn’t stopped ISIL from claiming responsibility for the attacks.

The attacks are just the latest in a series of violent offensives launched by militant groups in the DRC's North Kivu and Ituri provinces. The provinces are home to more than 1 million displaced persons and dozens of paramilitary and terrorist groups. Throughout the year-long battle against Ebola, violent attacks have shortly been followed by a spike in cases as the attacks temporarily halt disease surveillance and vaccination efforts.

The violence has also caused international actors, including the United States and Doctors without Borders, to remove or relocate health workers in the region for security reasons.

Today the United Nations' Stabilization Mission (MONUSCO) said groups like the ADF and the Mai-Mai, have created a "deadly environment" for responders, who have been both threatened and killed, UN News reported.

"I am concerned with the current situation in Ituri province, where spoilers are seeking to play on ethnic tensions to instigate inter-community violence," said Leila Zerrougui, the head of MONUSCO, in remarks made at a security meeting earlier today. Attacks by the ADF "continue to exact an intolerable toll on civilians."

Today the World Bank Group announced an additional $300 million to help scale up response efforts in the DRC.

"The communities and health workers on the front line of this outbreak urgently need more support and resources from the international community to prevent this crisis from worsening inside the country and from spreading across borders," said World Bank CEO Kristalina Georgieva.

According to the World Bank, the money will cover the Ebola-affected health zones in DRC and enable the government, World Health Organization (WHO), UNICEF, World Food Programme, International Organization for Migration, and other responders to step up the frontline health response.

Also today, the US Agency for International Development (USAID) announced an additional $38 million for the outbreak, which includes $15 million directed toward the WHO. USAID has given $136 million to the outbreak since August of 2018.

"The DRC has fought and controlled nine other outbreaks of Ebola successfully, with the help of the international community; however, this response has a unique set of obstacles because of the ongoing conflict in North Kivu and Ituri Provinces," USAID said in a press release.

"Continuing insecurity and difficulty in earning community trust are major hurdles. A robust, unified response by the Government of the DRC, the United Nations, other neighboring countries, the United States, and the international community in partnership with local communities is critical to stopping the spread of the disease."

According to the latest numbers on the WHO's online Ebola dashboard, there are 15 newly confirmed cases today, raising outbreak totals to 2,612.

For the second day in a row, DRC officials have provided no update on the outbreak, including statistics on the number of deaths, health workers infected, or suspected cases. Earlier this week, Oly Ilunga Kalenga, MD, the DRC's health minister, resigned following the DRC president's decision to move outbreak response management to a government expert committee.