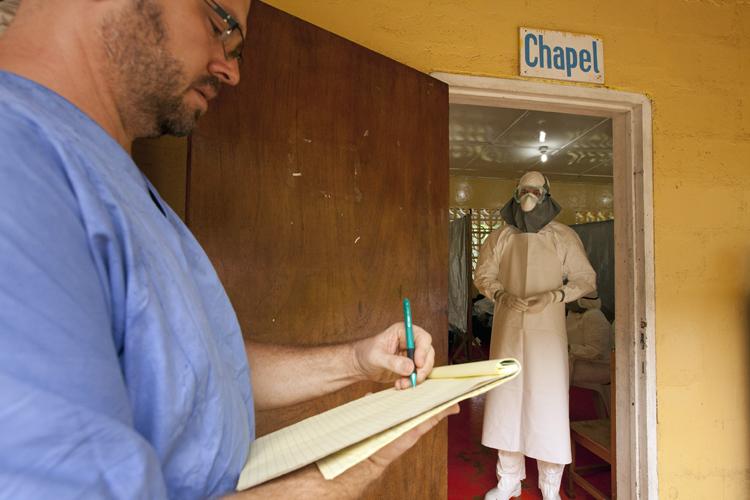 Kent Brantly, MD (right), an American physician who is now ill with Ebola, gives medication orders from the doorway of the isolation unit where he was caring for patients. , Samaritan's Purse

Amid the growing Ebola virus disease (EVD) outbreak in three West African nations, two new developments are fanning concerns about the international spread of the disease: a fatal infection in a Liberian air passenger who traveled to Nigeria and cases in two American medical workers in Liberia.

The air traveler was a 40-year-old Liberian man who had flown to Lagos, Nigeria, on Jul 20, having arrived on a connecting flight from Lome, Togo, the World Health Organization (WHO) said yesterday in a statement. He was symptomatic during travel and was admitted to a private hospital the same day he arrived in Nigeria.

An African media report said the man was a Liberian government worker who had traveled to Nigeria to take part in a meeting of a West African regional group known as ECOWAS (Economic Community of West African States). Quoting Nigeria's health minister, the Jul 25 AllAfrica report said the patient had severe vomiting and diarrhea as he arrived at the international airport in Lagos.

According to a Jul 26 Associated Press (AP) story, the man wasn't symptomatic when he boarded the plane, and his sister reportedly died from Ebola in Liberia, but he said he had had no contact with her.

On July 22, samples from the man were tested at Lagos University Teaching Hospital's virology lab, where they were positive for Ebola virus, according to the WHO. Confirmatory tests are underway at the WHO's Collaborating Center at the Pasteur Institute in Dakar, Senegal.

The man died on Jul 25, and the WHO said it, partners, and Nigerian authorities are working closely to contain the case at its source.

In another development, two Americans working at a treatment center in Liberia's capital, Monrovia, have tested positive for the virus.They are a doctor and another medical worker who was helping a medical team, according to a statement yesterday from Samaritan's Purse, a nondenominational Christian international relief organization based in Boone, N.C.

The group said the doctor is Kent Brantly, MD, medical director for its Consolidated Case Management Center, and that he is being treated at its isolation center at ELWA Hospital. He is from Fort Worth, Tex. The second American is Nancy Writebol, who is employed by SIM, an international Christian mission organization headquartered in Charlotte, N.C.

Samaritan's Purse said the site where the doctor works has 20 beds and treats all Ebola patients in the greater Monrovia area. It said it takes health providers 30 minutes to suit up and another 30 minutes to go through the decontamination process.

Because the weather is hot and humid, workers face temperatures of 115°F inside the protective suits and should stay in the gear for only 60 to 90 minutes at a time. It said the gear includes boots, a surgical cap, a Tyvek suit, two sets of gloves, a "beard" to cover the neck and chin, a face mask, goggles, and a waterproof apron.

Brantley recognized that he had symptoms last week and immediately isolated himself, according to Samaritan's Purse.

At a media briefing today, Stephan Monroe, PhD, deputy director at the US Centers for Disease Control and Prevention's (CDC's) National Center for Emerging and Zoonotic Infectious Diseases, said the doctor is symptomatic and is in an isolation unit. He added that the doctor has been exposed to patients with EVD both in and outside of the isolation unit, and "We don't know where the exposure occurred." The other American has a fever but no other symptoms.

Both of the Americans had been working in the region before the outbreak began and both had received training about EVD prevention from Doctors without Borders (MSF), a group that has a lot of experience with Ebola outbreaks, Monroe said.

He said the doctor's family of four had been living with him, but had returned to the United States before he got sick. As a precaution, the family is under medical monitoring for 21 days, the EVD incubation period.

Experts see little threat to the US

Monroe said there is little risk to the United States, because the disease is spread only by exposure to the blood and body fluids of an infected patient and that those infected aren't contagious until they are symptomatic. He added that a patient diagnosed with the disease after flying into the United States would be unlikely to spread EVD to other passengers.

However, given the remote possibility that a case could be detected in a traveler, Monroe said, the CDC has issued a Health Alert Network (HAN) advisory to healthcare providers, urging them to take a good travel history, know the symptoms of EVD, and know what steps to take if they identify a suspected case.

The CDC has had yellow (level 2) travel alerts in place for Guinea, Liberia, and Sierra Leone since the middle of June. The alerts recommend that travelers take enhanced precautions, such as avoiding contact with blood and body fluids of infected people, while traveling to the three countries.

The CDC has 12 staff members deployed to the outbreak countries,assisting with activities such as training and contact tracing. They are able to assist Nigerian officials with their investigation of airline passenger and crew members who may have been exposed to the Liberian patient who died from EVD in Lagos.

With a rapidly growing EVD toll, Liberia's government is taking new steps to curb the disease, including closing some border points and declaring a national emergency, according to media reports.

President Ellen Johnson Sirleaf, in her national emergency announcement, said she is establishing a national task force on Ebola, which she will chair herself, AllAfrica reported today. She called on all groups in Liberia to send a representative to serve on the task force. Sirleaf also said the government will establish a community outreach force to teach people about the disease and how to prevent it.

One of the biggest challenges health officials have faced in battling the outbreak is community denial that the disease is real and suspicions and myths—sometimes leading to violence and even hiding sick people—about EVD, its treatment, and response steps.

In a related development, Sirleaf announced late yesterday the closure of most of Liberia's land borders to curb the spread of the disease. She said all borders would be closed except major entry points and that Monrovia's international airport, a provincial airport, and three major crossings are exempted, but they will have prevention and testing centers, according to a report today from Agence France-Presse (AFP).

The announcement said the government would screen all outgoing and incoming passengers and is banning public gatherings and will quarantine communities hit by EVD, AFP reported.

The WHO said 108 new cases and 12 more deaths were reported in Guinea, Liberia, and Sierra Leone between Jul 21 and 23. The new cases push the overall outbreak to 1,201 illnesses, 672 of them fatal.

Among the latest cases, Sierra Leone, which last week became the country with the most cases, reported 71 new cases and 5 deaths. So far the country has recorded 525 EVD illnesses and 224 deaths.

Guinea, where the outbreak began, reported 12 new cases and 5 deaths, lifting its overall total to 427 cases, 319 of them fatal. Liberia reported 25 new cases and 2 more fatalities, putting its total at 249 infections and 129 deaths, according to the WHO.