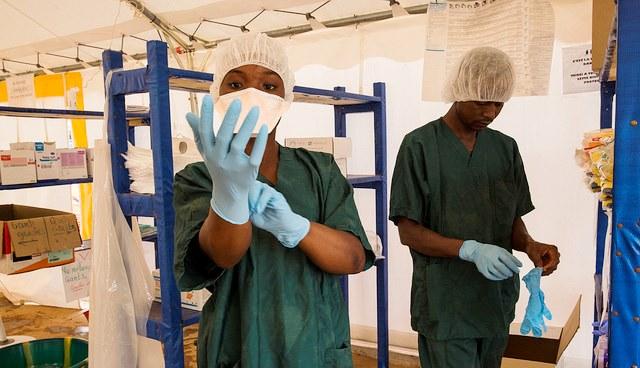 In a pair of new studies on Ebola treatment, a trial of convalescent plasma at a treatment center in Guinea didn't find a significant survival benefit, while patients at a Liberian treatment unit unexpectedly seemed to benefit from a malaria drug combo clinicians gave in response to a drug shortage.

Both studies were published today in the latest online edition of the New England Journal of Medicine (NEJM), alongside a shorter report on gender differences during the Ebola outbreak, such as higher survival rates in female patients.

Convalescent serum therapy was first used early in West Africa's outbreak to treat infected healthcare workers airlifted out of the region, but its use alongside other experimental therapies made it nearly impossible to assess any benefits. The therapy requires a degree of technical expertise and transportation capacity that prevented its use in the early and peak stages of the outbreak in West Africa.

A World Health Organization (WHO) expert group had tagged the treatment as a high priority for study, and after the response gained momentum in November, an international consortium announced plans to study convalescent whole blood in Guinea, then switch to convalescent plasma once supplies became available.

The trial described in today's NEJM report was conducted from Feb 17, 2015, to Aug 3, 2015, at a Doctors Without Borders (MSF) Ebola treatment unit (ETU) in Conakry, Guinea. All eligible patients with confirmed Ebola infections during that period were offered the treatment, and the control group included patients treated at the ETU before the trial began.

Patients received the therapy as soon as the treatment center had plasma that was compatible with their blood type. Patients got two consecutive 200 to 250 milliliter transfusions, each from separate survivor donors. Transfusions were given over 20 minutes, 15 minutes apart.

When researchers looked at patients' survival 3 to 16 days after diagnosis, they found that the risk of death was 31% in the convalescent plasma group and 38% in the control group. The difference, however, was smaller and nonsignificant—just 3 percentage points—after the team adjusted for age and cycle-threshold value.

The slight drop in deaths they saw was well below the 20% fatality reduction that the WHO expert group had set for a clinically relevant benefit.

No adverse reactions were seen in the patients who were treated with convalescent plasma.

Until a field assay is available, convalescent plasma with known antibody levels probably wouldn't be available unless it has been stockpiled during an Ebola outbreak, they noted, adding that more studies are needed to explore the link between antibodies in donated convalescent plasma and patient survival. "It is possible that high-titer convalescent plasma or hyperimmune globulin might be more potent," the team wrote.

Other questions for study include optimal treatment frequency and volume, and whether some patients are likely to benefit more than others. The team observed that although numbers in the study were small, benefits seemed greater for two groups known to have poor prognosis: children younger than 5 and pregnant women.

Though safety findings of the treatment seem reassuring, the investigators noted that it might be difficult to tease adverse reactions out against the backdrop of Ebola disease progression.

On a positive note, the researchers said the convalescent plasma treatment was feasible and acceptable to donors, patients, families, and healthcare providers, even in an outbreak setting.

Because malaria is common in the Ebola outbreak region and produces symptoms similar to Ebola, malaria drugs are often given to patients who have symptoms consistent with Ebola. In the second study, researchers compared the impact of two different malaria drug combinations in confirmed Ebola patients in a Liberian ETU after a temporary shortage of the first-line drug.

The first-line malaria therapy combination was artemether-lumefantrine, but providers ran out for 12 days in August in the wake of a spike in admissions. During that time health workers used an artesunate-amodiaquine combination. Amodiaquine had shown activity against the Ebola virus in earlier in vitro studies, but it hasn't been a part of top-level therapy because of concerns about possible liver toxicity.

Researchers said though the change in malaria therapy wasn't planned, it offered them the chance to look for any possible differences between the two drug combinations. Patient characteristics among the two groups were similar, but the alternative-therapy group had lower cycle-threshold values on admission, got antibiotics less often, were less geographically clustered, and were admitted when the ETU was busier.

Researchers compared 194 patients who received the first-line malaria treatment with 71 who got the combo used during the shortage. In the artemether-lumefantrine group, 64.4% died, compared with 50.7% of the artesunate-amodiaquine group. The adjusted analysis found a 31% lower risk of death in the group that got the substitute drug combo, with a stronger effect seen in patients without malaria.

The team concluded that the lower death rate in the alternative-combo group is biologically plausible, based on in vitro studies, but they said they couldn't rule out the possibility that the first-line therapy combination increases the risk of death.

Though questions about the mechanisms of the drugs in the context of Ebola infection remain, the findings suggest that artesunate-amodiaquine might be preferable to artemether-lumefantrine, the investigators wrote. They urged health providers in the Ebola-affected countries to confirm the findings and to look at a possible connection between artemether-lumefantrine and fatal arrhythmias.

In a letter in the same issue of NEJM, meanwhile, researchers from the WHO's Ebola response teams described their analysis of gender differences found in Ebola epidemiologic data. They analyzed data from 20,035 confirmed and probable cases that were reported in Guinea, Liberia, and Sierra Leone from December 2013 to Aug 11, 2015.

For each country district they compared the proportion of male and female Ebola patients, also assessing for any difference in incubation period, time from symptom onset to hospitalization, hospital duration, case-fatality rate (CFR), clinical patterns, and exposures to sick people.

For the three countries combined, 51.2% of probable case-patients were female and 48.8% were male. Though levels varied by a small amount by country, Guinea's Gueckedou district stood out as having an unusually low proportion of male patients: 36.6%. Results were similar for confirmed cases.

The interval from symptom onset to hospitalization was 0.5 days shorter for females in all countries, and females were significantly less likely to die than their male counterparts: 63% CFR vs 67.1%. Researchers found that the survival difference was still significant, even after they adjusted for age, clinical signs, and time between symptoms and hospitalization.

Though a higher proportion of females had been exposed to a sick person, the number of exposures between the two groups wasn't significantly different. The scientists found similar risks for Ebola among males and females, but males on average spent 12.5% longer in the community while they were symptomatic.

Investigators said the sex-difference patterns they found might be useful for planning public health measures to curb the spread of Ebola.