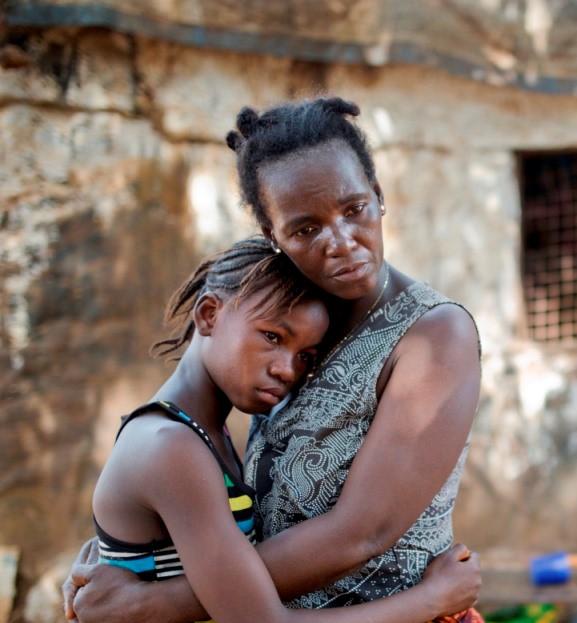 A 45-year-old Ebola survivor with her daughter; they lost 10 family members to the disease., World Bank, Dominic Chavez / Flickr cc

With Ebola survivors numbering about 13,000 in West Africa's outbreak region, many are left with sometimes-debilitating chronic effects. Experts wrapped up a weeklong meeting today in Sierra Leone designed to take on survivors' issues.

Global health experts are finding that nearly half of all survivors have joint pain, which can be debilitating. Inflammatory eye conditions, including uveitis, are also a common problem and can lead to blindness when severe and untreated. Other common issues are fatigue, headache, and mental health problems.

At a media telebriefing today, Anders Nordstrom, MD, the World Health Organization (WHO) representative in Sierra Leone, said recovery from the disease is a long, hard road for many patients, and the sheer number of survivors in the outbreak offers a unique opportunity to learn about the after-effects of the disease and how to manage them.

"We hope the conference will lead to better support and better preparedness in the future," Nordstrom said.

Daniel Bausch, MD, MPH, with the WHO's clinical care team, said the meeting enabled experts to share their experiences about clinical care for survivors, researchers to compare data, survivors to speak, and groups to share insights on what social work strategies are useful. He is an Ebola expert from the Tulane School of Public Health and Tropical Medicine in New Orleans.

Researchers at the meeting sketched out knowledge gaps that remain, talked about study protocols, and discussed how to build research capacity within the outbreak countries, he said.

Earlier Ebola outbreaks occurred on a dramatically smaller scale, and clinicians had only a few survivor case reports to guide them in their treatment of the conditions, Bausch said. The large number of survivors in West African countries allows an unprecedented chance to study the complications and devise possible treatments.

Researchers will also be looking at joint pain pathogenesis, with an eye toward developing new treatments or using ones that already exist. They said that for now, treatment is symptomatic. The experts noted that joint pain is also a common complication of other infections, such as dengue and chikungunya.

One topic on the research agenda is learning more about how the virus persists in immune-protected areas such as the eyes and testes. Sexual transmission in Ebola survivors is strongly suspected in a few cases, and Bausch said such infections don't appear to be occurring frequently.

He said, however, that studies are under way in all three countries to explore viral persistence in semen, with preliminary evidence suggesting that it can last hundreds of days. It's difficult to tease out how common live viruses are in semen, he added, because the work must be done in biosafety level 4 labs, which the outbreak countries don't have, and it's a laborious process to ship samples to facilities that can safety handle them.

Alie Wurie, MD, with Sierra Leone's health ministry, said studies are being expanded to look at the virus in other body fluids.

Outbreak countries have amassed a wealth of biological samples during the Ebola epidemic, and researchers started discussions on how to organize and ethically use them.

Bausch said the issue of biobanking—or creating large repositories of biological samples—is in early discussions, but there are grassroots efforts under way in all three countries. He said that outbreak nations need to be the drivers of managing the samples, to ensure their availability in a reliable and responsible way that protects stakeholders, including the patients themselves, and ensures shared access to the information gained from the specimens.

Wurie said that, as a result of the WHO meeting, Sierra Leone's health ministry will start talks on biobanking next week.