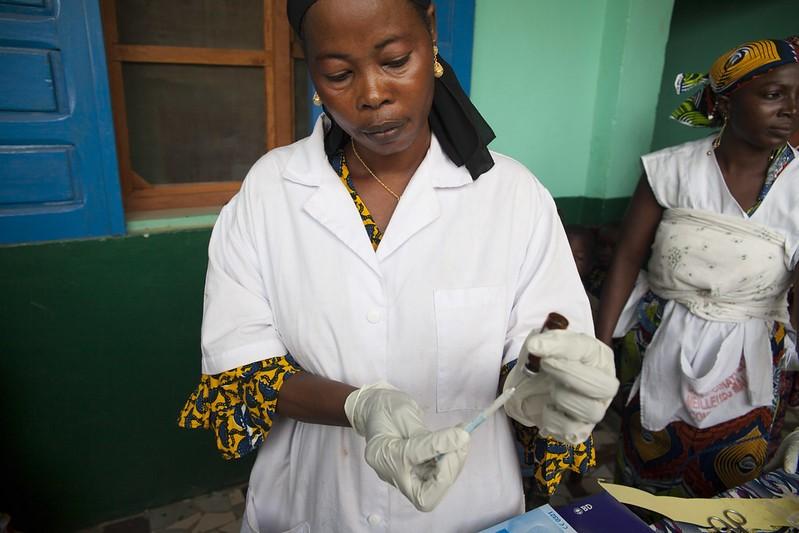 Over the weekend officials in the Democratic Republic of the Congo (DRC) confirmed 11,000 doses of Johnson & Johnson's Ebola vaccine (known as the J&J vaccine) had arrived in country, a development that's been in the works for months as that country battles the second-largest Ebola outbreak in history.

The 11,000 doses are part of 50,000 to be used in a clinical trial evaluating the efficacy of the vaccine in an outbreak setting. The Ad26.ZEBOV, MVA-BN-Filo vaccine will be given to adults and children over the age of 1 in two doses, spaced 2 months apart. The vaccine was developed by Janssen and Bavarian Nordics in 2014 to target the Ebola Zaire strain.

Vaccine use outside of outbreak areas

The vaccine will primarily be used to prevent spread of the virus outside of the outbreak zones, unlike Merck's VSV-ZEBOV vaccine, which has been used in a ring vaccination campaign geared toward close case contacts and frontline health workers.

The DRC's Ebola technical committee (CMRE) said the vaccines arrived in Goma from Belgium, and training on use began yesterday. Earlier this year researchers in Uganda launched a 2-year clinical trial of the vaccine among healthcare and frontline workers.

According to news reports, the former health minister in the DRC, Oly Ilunga, resisted using the J&J vaccine for months because he did not want to introduce a second vaccine into communities already hesitant about the outbreak response. Ilunga left his post in July, paving the way for the vaccine's introduction.

The General Director of the DRC's National Institute for Biomedical Research, Jean-Jacques Muyembe, MD, said the J&J vaccine would be used from mid-November, in both the DRC and Rwanda.

As of yesterday, 246,627 people in the DRC and surrounding countries have been vaccinated with Merck's vaccine.

No new cases in past 2 days

Yesterday and today the DRC confirmed no new cases of Ebola, leaving the outbreak total at 3,274 according to the World Health Organization's (WHO's) Ebola dashboard. A total of 513 suspected cases are still under investigation.

Of the 3,274 cases, 2,185 deaths have been recorded. The CMRE said the two most recent cases in the outbreak were in Mabalako and Mandima.

Also, over the weekend a community health worker and radio news host in Lwemba, Ituri province was killed. All Africa said the death was caused by stabbing.

"Authorities have begun an investigation of the murder and are looking into whether it is connected to the ongoing Ebola response," read a statement from the WHO's African regional office.

"Any act of violence against individuals involved with the response is unacceptable and compromises the ability of health workers to provide assistance to communities impacted by the devastating effects of Ebola."

The WHO said that, since Jan 1, 2019, there have been 300 attacks on healthcare workers and patients in the DRC, resulting in 6 deaths and 70 injuries.