Migrations in West Africa seen as challenge to stopping Ebola 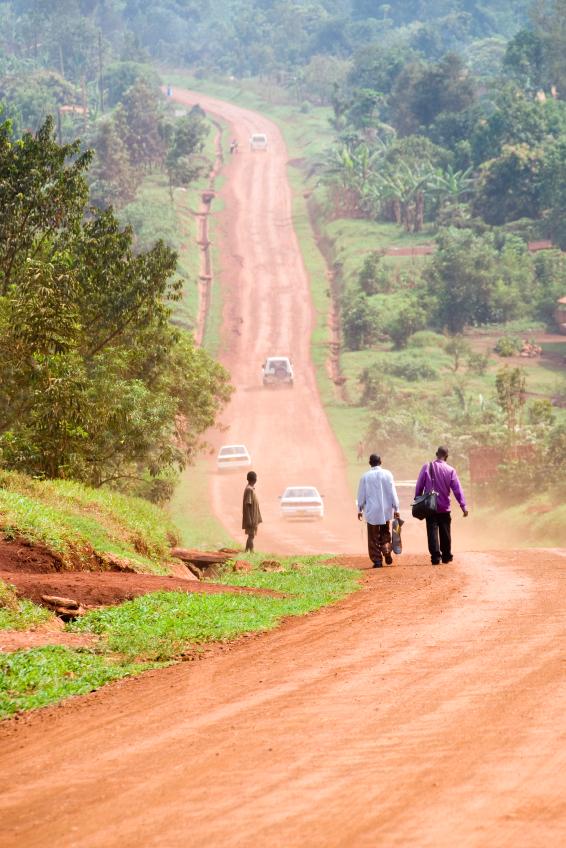 In much of West Africa, the annual harvest ends around October, and in the following months, countless young men hit the road to look for work elsewhere, such as on cocoa and coffee plantations in Ivory Coast or in fishing ports on the coast, according to people who know the region.

That post-harvest migration is a prime example of the high mobility of the region's population. National borders are porous and don't mean a whole lot, and people cross them freely, by all accounts. And that fact worries some observers who are pondering the challenge of stopping the Ebola epidemic simmering in Guinea, Liberia, and Sierra Leone.

With a high level of travel between the three hard-hit countries and their neighbors, these observers reason, there's a very good chance that travelers or migrants will bring more Ebola cases into other countries, such as Senegal, Mali, and Cote d'Ivoire (Ivory Coast), potentially triggering expansion of the epidemic.

"I think it's a real problem, and I don't think it's been factored into the paradigm of how this is likely to spread," said Peter Strzok of Pinehurst, N.C., who has spent much of his life in West Africa and founded his own nonprofit organization, the Agency to Facilitate the Growth of Rural Organizations.

So far, Senegal has had one Ebola case, and Mali has had at least four (two confirmed and two probable); all of these had links to Guinea. The Senegal case, which surfaced in August, didn't spark any further transmission, but the Mali cases are very recent, and contacts are being monitored.

Strzok said most people in West Africa are farmers, and their schedule is governed by the rainy season, from May to October. Once the rains are sufficient, everyone plants crops, such as rice, sorghum, millet, peas, and peanuts. Once the crops are in, many men leave home to find temporary work, and they return to harvest the crops in August and September, he explained.

After the harvest, many young men again take to the roads seeking work, Strzok said. "They've been doing this for 1,000 or 2,000 years," he said. "We have literally tens of thousands of young men, 16 and up, leaving wherever they are and their home villages and going elsewhere to find employment."

Borders pose little obstacle to the travelers, he said. They may take back roads or trails and avoid border checkpoints, he said. Even where there are border stations, "The people at the borders are pretty much indifferent to these kids."

Another factor is that residents of countries in the Economic Community of West African States (ECOWAS) don't need visas to cross borders within that zone, said Victoria Coifman, PhD, a University of Minnesota historian in the African American/African Studies Department who specializes in West Africa.

Strzok said the young men who go abroad seeking work often travel in groups. "They sleep and eat together; it's a very communal, tight relationship." If one of them contracted Ebola, it could easily spread to the others, he suggested.

"These activities are a reality, and I've seen nothing in the discussion [of the epidemic] about the informal traditional migration patterns," he said.

Another West Africa expert who is concerned about the situation is Richard Swanson, PhD, an economic anthropologist who spent years monitoring aid programs in the region as a consultant to the US Agency for International Development. He agreed with the general picture painted by Stzrok but filled in more details.

Swanson, who lives in New Brighton, Minn., said the pattern of post-harvest migration late in the year in West Africa applies most strongly to the Sahel, the transitional zone between the Sahara Desert to the north and the savannas and forests to the south.

He explained that in the coastal regions, including much of Guinea, Liberia, and Sierra Leone, farming is more of a year-round activity, whereas farming in the Sahel to the north is more dependent on the rainy season. "I think most of the migration in terms of [people] looking for work is people coming from those Sahelian countries and moving south" after the harvest. "Then they come back again in April."

Many of the migrants typically head for the three Ebola-affected countries, Swanson said. "It's just a major migration coming into those countries. It would be good for those countries to be warning people over the radio not to come down to Liberia this year. And people do have radios—its' amazing how much communication there is."

The heaviest travel time will begin soon, Swanson said. "Most migration starts around the end of November, and really picks up in December and January."

He also observed that kinship ties in the region commonly extend across borders, which also contributes to the volume of travel: "People in Guinea and Sierra Leone have kinship ties into Mali, for example, and Ivory Coast. There's intermarriage going on. If someone's fearful of what's going on in their country, some of them are going to start moving and walking away from it."

Mike McGovern, PhD, a political anthropologist at the University of Michigan who has worked extensively in West Africa, offered a more complicated view of the migration patterns.

In the southern portion of West Africa, he said, Cote d'Ivoire—bordered on the west by Liberia and Guinea—is a major magnet for itinerant workers, especially for those from the Sahel. "Those people are going into the big cities where they can find wage labor or they are going to cash-crop plantations," he said. "Many roads lead to Cote d'Voire, because of massive cocoa and coffee plantation agriculture and also because Abidjan is a major place for getting wage labor."

Liberia and Sierra Leone are less of a magnet for workers from places like Burkina Faso, Senegal, and Mali, he said. The two countries offer jobs in artisanal diamond and gold mining, logging, rubber plantations, and palm oil plantations, but all those jobs are filled by their own nationals and perhaps some from Guinea, he explained.

However, he added, during the dry season Cote d'Ivoire draws workers from Liberia, Guinea, and Sierra Leone, just as it does from the Sahel countries like Mali and Burkina Faso. Thus, itinerants from the Ebola-affected countries could bring the virus into Cote d'Ivoire, where it could pass to locals and to other visiting workers, "who could quite plausibly bring Ebola back to their countries—to Niger, Burkina Faso, Senegal, Mali, Ghana, Togo," he said.

"If that were to happen, it has a potential for a real multiplier effect regionally," he added.

McGovern said the pattern of rainy and dry seasons in the coastal countries, including the Ebola-stricken ones, is similar to that in the inland countries to the north, but is not as pronounced. "The real rainy season is May to October. On the coast most of it is concentrated from late June to mid-September."

In the coastal countries, migrations are not as essential for survival as they are in the Sahel, he added. Young men may leave home seeking work to raise money for marriage or to gain their independence, in steps related more to their stage of life than to the time of year.

John J. Bartee, a Liberian immigrant who came to the United States in 1998 and lives in the Twin Cities of Minneapolis and St. Paul, described a migration pattern similar to that sketched by people like Swanson and McGovern.

He observed that many inhabitants of the Sahara and Sahel belong to the Mandingo tribe. During the dry season, from about Oct 15 to April 15, he said, many men "leave and come to the forests and do hunting, buying of food, and to work. During the rainy season they return home to their wives and children."

Bartee said the heaviest travel time is from October to January, when the weather is favorable for moving.

He also commented that large volumes of trade goods flow between countries in the region. For example, 18-wheeler trucks from Mali regularly roll into a major market in Monrovia, the Liberian capital, bringing cows and other goods and picking up seafood to take back north.

A long history of mobility

Coifman, the University of Minnesota historian, said migrations have been an important part of life in West Africa for many centuries.

In Guinea, Liberia, Sierra Leone, and their neighbors, she said, "Migrations have been taking place for thousands of years, in part because of the spread of the Sahara Desert. Migration routes and people's varied networks go in every direction; I think of them as spider webs. Long or short distance, they transcend modern boundaries."

People move around for a wide range of reasons, such as engaging in trade, seeking work, attending weddings and funerals, and visiting religious shrines, she said, commenting, "In this part of Africa, many are moving as a normal course of life."

Since the 1960s, when West African countries achieved independence, there has been a tension between the modern borders and old migration paths, Coifman observed. The tension has been exacerbated by weak central governments, poor governance, corruption, and, in Liberia and Sierra Leone, war, she said.

She commented that people's mistrust of governments contributes to the permeability of borders. "People in places fear, dislike, avoid—often with good reason—governments, national and local," she said. "They are tired to death, and now they are being afflicted by an epidemic, and then people coming in in strange clothes. If I were living in those conditions, I'd feel like I was living in an insane world."

A matter of luck?

Given the high volume of travel in West Africa, it seems surprising that Ebola has made so few inroads thus far in countries other than Guinea, Liberia, and Sierra Leone.

The reasons are not clear, but Bartee offered a possible explanation for the lack of cases in Cote d'Ivoire. The reason, he suggested, is not because the border was closed, but because very few cases have surfaced in areas of Liberia that lie near Cote d'Ivoire.

"The virus is not as close to the borders as people think," he said.

McGovern, of the University of Michigan, predicted that the epidemic will expand farther in West Africa: "It's not a question of if, but when and to what extent. It's gone to Mali, it's gone to Senegal. It's quite extraordinary that there's not been a case yet in Cote d'Ivoire."

Why the country hasn't had any cases yet is unclear. But McGovern said there has been much talk about traditional hunters and government officials in Cote d'Voire "essentially patrolling not only the official crossings but also the canoe crossings and bush paths and informal crossing points. That may be a big part of the explanation for why we haven't seen it in Cote d'Ivoire."

While Ebola will probably reach more countries, that doesn't necessarily mean it will run rampant, McGovern said. He noted that Senegal and Nigeria managed to keep imported cases from sparking widespread outbreaks.

"Do I expect that it [Ebola] will extend to other countries? Yes," he said. "Am I worried about it? Not necessarily, in the sense that international public health and the health community in the countries concerned are convinced it requires immediate attention and resources."