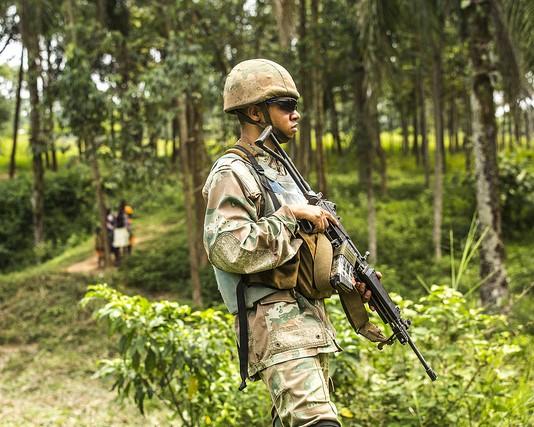 An armed group 2 days ago struck the same Ebola treatment center in Butembo in the Democratic Republic of the Congo (DRC) that sustained an earlier attack, killing a police officer as the security team repelled the attackers.

Alongside the fresh violence, the DRC health ministry reported five new cases in updates over the weekend and through today, and an outbreak response team made headway tracking a transmission chain in a high-risk village south of Butembo.

The health ministry said in its Mar 9 update that early that morning, heavily armed men attempted to attack the Butembo's Ebola treatment center. But officials had been informed of a possible attack and security forces had prepositioned themselves around the treatment center, which helped repel the attackers and save lives.

Officials said a policeman protecting the treatment center died in the gun battle and that several assailants were captured.

The health ministry was in contact with medical staff, who were on hand to calm patients who remained in their isolation rooms.

Attackers included Mai Mai militia, and the attack also wounded health workers, according to a Mar 9 report from Reuters. North Kivu is one of the DRC provinces that is home to different Mai Mai militia groups, which reportedly align themselves with a variety of domestic, foreign, and guerilla groups with different objectives, some political.

The treatment center was attacked by an unknown group on Feb 27, which—along with an earlier attack an another facility in Katwa—prompted Doctors Without Borders (MSF) to withdraw its staff from the outbreak's epicenter. The Butembo location quickly reopened, staffed by local health workers.

Saturday's attack came just hours before a visit from World Health Organization (WHO) leadership, accompanied by senior US officials. During a 3-day mission, the group met with the DRC's president, government officials, partner organizations, and local responders.

WHO Director-General Tedros Adhanom Ghebreyesus, PhD, said in a statement, "It breaks my heart to think of the health workers injured and police officer who died in today's attack, as we continue to mourn those who died in previous attacks, while defending the right to health. But we have no choice except to continue serving the people here, who are among the most vulnerable in the world."

Tedros said the attacks aren't by the community; they are perpetrated on the community by groups exploiting a desperate situation for their own purposes. He said people in Ebola-hit communities want and deserve a place to receive care and a chance to survive the disease. "They do not deserve to suffer in their homes while infecting their loved ones; they do not deserve to suffer in inadequately resourced health centers while infecting health workers."

He said the WHO has asked for and received more support from the United Nations and local police to protect the treatment centers, and he emphasized that battling Ebola requires striking a delicate balance between providing accessible care, maintaining the neutrality of the response, and protecting patients and staff from attacks by armed groups.

"These are the dilemmas we face in conflict zones around the world. We are committed to ending the outbreak, and we are committed to improving the health of the people of the Democratic Republic of the Congo," Tedros said.

MSF on its Twitter account strongly condemned what it called an appalling attack on the Ebola treatment center in Butembo. It also expressed its solidarity with colleagues from the health ministry and the WHO, and it sent condolences to the family of the police officer who died during the attack.

In other outbreak developments, in daily updates over the weekend and through today, the health ministry reported 5 more cases, including 3 in Butembo, 1 in Katwa, and 1 in Biena.

Four more people died from their infections, all from Butembo, boosting the fatality count to 582. One death occurred in the community, and three patients died in the city's Ebola treatment center.

It today's update, the DRC health ministry said health officials from the Butembo outbreak response office today made a risky mission to a village named Kighali in Lubero health zone, located south of Butembo. It said the trek is dangerous, because armed groups monitor the movement of vehicles and people from hills surrounding the village.

Yesterday, three epidemiologists who entered the village to investigate a confirmed case there in a woman who fled Butembo were seriously injured by an angry mob.

Today's mission was designed to address community reluctance against vaccination and household decontamination and to pave the way for other response steps, including contact tracing, establishing a 21-day tracking system, and distributing food to all contacts.

It said a large crowd gathered to listen to speeches from the speakers, who emphasized the importance of hosting response teams, being vaccinated, and respecting other prevention steps. So far, about 60 contacts there have registered for vaccination and 21-day follow up.