Recovery of US Ebola patients renews focus on treatment 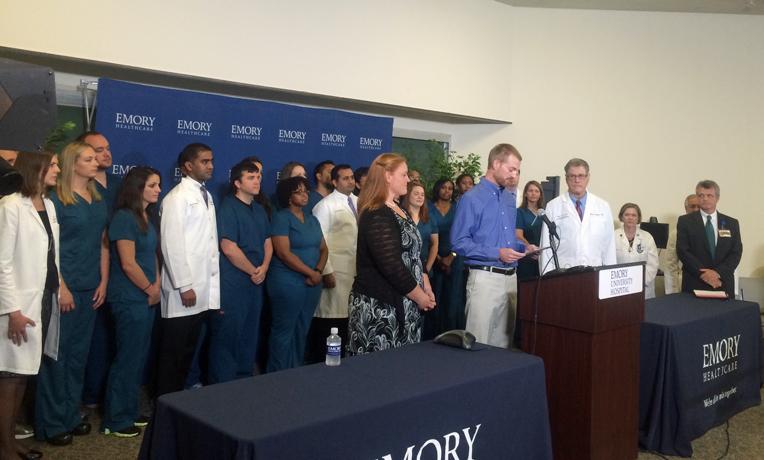 Kent Brantly, MD, thanked people for their prayers and praised the staff and other groups for the care he received., Samaritan's Purse

Two medical missionaries who were infected with Ebola virus in Liberia and were evacuated to Emory University Hospital in Atlanta about 3 weeks ago have recovered and been discharged, with Kent Brantly, MD, thanking staff at a hospital press conference today.

In a surprise announcement, hospital officials said Brantly's colleague, Nancy Writebol, was discharged on Aug 19—quietly, at her request—and is spending time with her husband at an undisclosed location.

The aid organization Samaritan's Purse, Brantly's employer, said in a statement that he ran out of the isolation unit giving high fives to his treatment team, who were lining the halls. The image of Brantly wearing an oxford shirt and khakis at the media briefing, where he and his wife hugged each of the medical staff members flanking him at the podium, contrasted sharply with media images from earlier this month of him gingerly entering the hospital in head-to-toe protective gear.

Bruce Ribner, MD, who led the team that treated Brantly and Writebol, said that after a rigorous course of treatment and rigorous testing, the patients can return to their families, communities, and lives without public health concerns. He said his team and federal health officials are confident that the discharges pose no threats.

The US Centers for Disease Control and Prevention (CDC) said in a statement today that it is heartened to learn that the patients have been discharged from the hospital. "CDC has advised Emory University Hospital that there is no public health concern with the release of these patients. They no longer have Ebola virus in their blood and therefore pose no risk to household contacts or the public," the agency said. It added that there are no restrictions on the patients' daily activities.

The CDC said it has consulted with the Emory team and conducted lab tests to confirm that the patients no longer have Ebola virus in their blood. Patients who have recovered from Ebola virus disease (EVD) aren't contagious and do not transmit the virus through their blood or other body fluids, the agency said.

At today's briefing, Brantly described the early days of his illness in Liberia, where he and Writebol worked in a busy EVD treatment center in Monrovia, the capital. He thanked people for their prayers, Samaritan's Purse for taking care of him and his family, and the medical staff at Emory who cared for him.

"Please do not stop praying for the people in Liberia and West Africa," he said.

Brantly said Writebol, as she was released from the hospital, asked him to share her gratitude. "As she walked out of her isolation room, all she could say was, 'To God be the glory,'" he said.

Writebol's husband David said in a statement today posted on the Web site of SIM, the missionary group that employed her, that the lingering effects of the disease have left his wife weak. "Thus, we decided it would be best to leave the hospital privately to be able to give her the rest and recuperation she needs at this time."

David Writebol flew to Charlotte, N.C., from Liberia on Aug 10 and completed his 21-day fever watch for EVD on Aug 16, SIM said.

Ribner told reporters that most patients who survive EVD make a complete recovery, unless they have substantial organ damage. He said patients who recover are thought to be immune to the virus, but only to the strain of virus they had. There are five Ebola strains.

Emory's medical team learned a lot about treating the disease during Brantly and Writebol's hospitalizations, especially the importance of fluid and electrolyte replacement and insights on clotting problems, he said. The team is developing treatment guidelines to share with their medical colleagues in Africa as well as in medical journals.

Even though many clinics in West Africa's outbreak settings aren't able to measure electrolytes, it is important pay attention to replacing them, Ribner said.

According to media reports, the two patients were treated with the experimental EVD drug ZMapp while in Liberia, and Brantly reportedly received convalescent serum from a patient who had recovered from the illness.

Ribner said it's not clear if the treatments helped or what the long-term sequelae will be in the wake of the measures. He added that the two patients are scheduled for follow-up visits at Emory and that staff will monitor their conditions.

WHO meeting to tackle treatment topics

Meanwhile, the World Health Organization (WHO) weighed in on EVD treatment issues today, with the release of a statement that said clinicians in Liberia have reported that two doctors and one nurse have now received ZMapp.

The nurse and one of the doctors have shown marked improvement, while the condition of the second doctor is serious, but has improved somewhat, the agency reported.

The WHO said supplies of the experimental drug are now exhausted. It added that ZMapp is one of several experimental treatments and vaccines for Ebola and that supplies for all are extremely limited.

It announced that it will host a meeting on the experimental treatments on Sep 4 and 5 in Geneva to gather information about the most promising treatments and their role in containing West Africa's EVD outbreak, which has now sickened at least 2,473 people and led to at least 1,350 deaths, according to the most recent WHO statement.

Scientists will discuss safety and efficacy issues, along with possible ways to speed up clinical trials, the WHO said. The group will also explore ways to speed production of the most promising treatments.