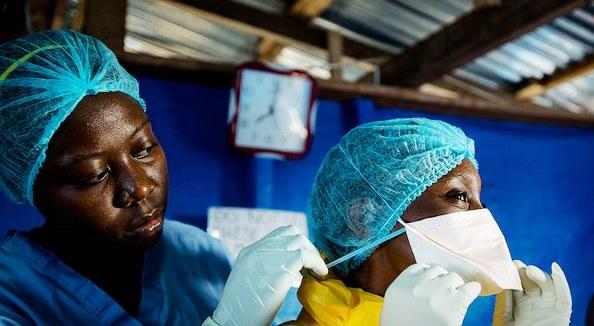 Ebola infections in healthcare workers (HCWs) were much more likely to occur in a non-Ebola hospital or at home than in an Ebola treatment center, according to a study yesterday in BMC Infectious Diseases that involved 293 infected HCWs in Sierra Leone.

In other new reports, an experimental antiviral drug was shown effective against the disease in monkeys, and Centers for Disease Control and Prevention (CDC) experts, in two separate reports, highlighted the role the agency played in outbreak response and underscored the importance of public health labs.

Only 11% of HCWs infected in ETUs

For the HCW study, researchers led by World Health Organization (WHO) scientists analyzed data on 227 confirmed, 6 probable, and 10 suspected Ebola cases in nine Sierra Leone districts from May to December 2014. The team estimates a 12% attack rate, based on 2,435 HCWs in the country at the time.

The investigators also queried about infection prevention and control training. Eighty-five HCWs (34%) said they had not received such training, while 150 (60%) said they had. The authors also noted that, as with the general population, late presentation to a treatment facility was a "major issue."

In related news, researchers said that an experimental small-molecule antiviral compound prevented Ebola disease in Rhesus monkeys, according to their presentation last week at IDWeek in San Diego.

The antiviral drug GS-5734 protected 100% of monkeys who were administered the treatment 3 days after being infected with Ebola virus. The antiviral also appeared to reduce viral load and physical signs of disease, including internal bleeding and tissue damage, according to an Oct 9 press release from the US Army Medical Research Institute of Infectious Diseases (USAMRIID). The release did not specify the number of animals tested or the specific virus strain.

The drug candidate was also shown in cell-culture studies to be effective against the related Marburg and Lassa viruses, in addition to the current outbreak strain of Ebola (Makona strain) and other Ebola variants, as well as Middle East respiratory disease coronavirus, or MERS-CoV, according to the release.

"The compound, which is a novel nucleotide analog prodrug, works by blocking the viral RNA replication process," said USAMRIID principal investigator Travis Warren, PhD. The experimental antiviral is being developed by USAMRIID in Frederick, Md., and Gilead Sciences of Foster City, Calif.

The response has been the most extensive in the CDC's history, the report said, and involved deploying more than 1,200 professionals to the outbreak region for more than 50,000 person-workdays.

Among the lessons learned were that stronger national and international systems are needed for disease detection and control. The two officials also noted that global response needs more staff who possess a wider range of skills to be deployed quickly and for longer periods.

They recommend an integrated national laboratory strategic plan, establishing a corps of lab volunteers, initiating a field lab training program, and developing a lab scorecard, among other steps.