Trial of Ebola drug ZMapp launches in Liberia, US 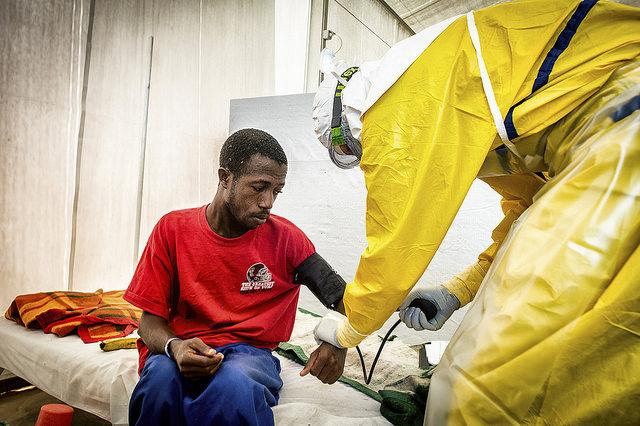 The National Institutes of Allergy and Infectious Diseases (NIAID) announced today that it and Liberia's government have launched the first clinical trial of ZMapp, a monoclonal antibody treatment that has been used on an emergency basis to treat some Ebola patients, especially sick health workers who were evacuated from the outbreak region.

In a statement today the NIAID detailed the design of the trial, which will take place at an Ebola treatment center in Monrovia and in the United States at up to four high-containment treatment facilities, including the National Institutes of Health Clinical Center in Bethesda. Md.

The agency added, however, that steeply dropping Ebola activity in the outbreak region—along with fewer cases likely to be treated in the United States—will likely make it difficult to stick to the original trial design.

"Study investigators anticipate the need for flexibility in the conduct and design of the trial to address the changing nature of the outbreak in West Africa," the NIAID said. "Consideration will also be given to other sites in the outbreak region that express interest."

The first phase will be a randomized controlled trial of adults and children to compare ZMapp, made by Mapp Biopharmaceutical, with standard care, which typically includes intravenous fluids, correcting electrolyte imbalances, maintaining oxygen levels and blood pressure, and treating any secondary infections.

Anthony Fauci, MD, NIAID's director, said in the statement that although ZMapp has been used to treat several patients over the past few months, it's difficult to tell if the drug truly worked, because it wasn't administered in a controlled trial setting. "This clinical trial will help us determine if ZMapp and other treatments are safe and effective for use in the current devastating outbreak in West Africa as well as in future outbreaks."

Patients who will get ZMapp will receive standard care, plus three separate intravenous infusions of ZMapp given 3 days apart. The dose will depend on the patient's weight, and those who receive the drug will be monitored for 30 days after hospital discharge and may return to the hospital for follow-up assessment.

Researchers hope to include 100 participants in each arm of the trial, which will first compare ZMapp with standard care to establish a baseline, then evaluate other possible Ebola treatments to gauge which would become the standard of care against which other Ebola interventions will be tested.

The NIAID added that it is collaborating with experts from seven institutions to conduct the trial, which is expected to conclude in December 2016.

An official from the World Health Organization (WHO) who spoke to reporters at the close of a 3-day vaccine advisory meeting said an independent group will decide in August at the earliest if an Ebola vaccination campaign should take place in the outbreak region, according to a Reuters report.

Christian Lindmeier, a WHO spokesman, said the recommendation will depend on the results from clinical trials and the course of the epidemic. A trial of the two vaccines that are furthest along in development are under way in Liberia, and other trials are planned for Sierra Leone and Guinea.

Also, researchers involved in human trials of a third Ebola vaccine, a prime-boost product developed by Johnson & Johnson, said the vaccine is being fast-tracked and will be tested soon in African countries that haven't been hit by the outbreak, UK-based Sky News reported today.

The first human trial of the vaccine, conducted by researchers from Oxford Vaccine Group at the University of Oxford, launched in early January. The next phase of the trial is expected to launch soon in Ghana, Tanzania, and Kenya, with large-scale testing planned for later this year, according to the report.