WHO: It's ethical to use untried drugs in Ebola outbreak 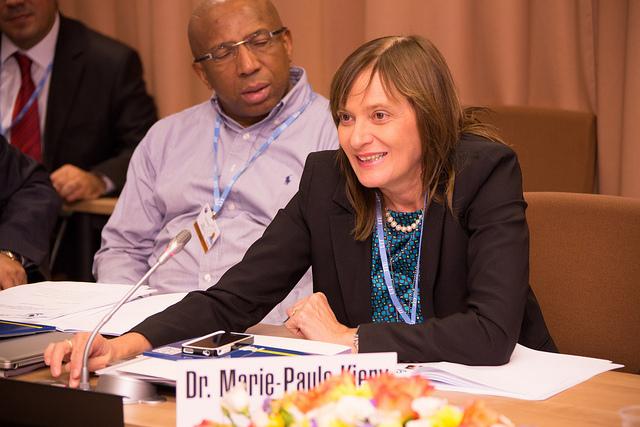 A World Health Organization (WHO) ethics panel said today that it's ethical to use unlicensed experimental drugs and vaccines to fight West Africa's Ebola epidemic, as media reports said the last available doses of one such drug are being sent to Liberia to treat two doctors stricken by the disease.

At a press conference, Marie-Paule Kieny, PhD, the WHO's assistant director-general for health systems and innovation, said a committee of a dozen experts who conferred by phone yesterday agreed that it's appropriate to use the interventions now in development, provided patients are fully informed of the risks and that health workers gather maximal data about the results.

The panel didn't suggest criteria for deciding who should have priority for use of the products, but the group will consider that at a later meeting, Kieny said. She speculated that November or December may be the earliest that any additional doses of any of the drugs could be available.

Meanwhile the epidemic continued to grow. Late yesterday the WHO said 69 more confirmed, probable, and suspected cases of Ebola virus disease (EVD) were reported by the four affected countries from Aug 7 through 9. The total count reached 1,848 cases and 1,013 deaths.

Liberia reported 45 of the new cases and 29 deaths, the WHO said. Sierra Leone had 13 cases and 17 deaths, while Guinea reported 11 cases and 6 deaths. Nigeria had no new cases or deaths.

Those hit by EVD include nearly 170 healthcare workers (HCWs), more than 80 of whom have died, WHO Director-General Margaret Chan, MD, MPH, said today in an Ebola briefing to United Nations member state representatives. She said those casualties weaken the healthcare response, can prompt closure of hospitals, and drive public fear "to new extremes."

In a statement, the WHO said Ebola outbreaks can be contained through the standard methods of early case detection and isolation, contact tracing, and strict infection control, but added that a specific treatment or vaccine would be a "potent asset to counter the virus."

"In the particular circumstances of this outbreak, and provided certain conditions are met, the panel reached consensus that it is ethical to offer unproven interventions with as yet unknown efficacy and adverse effects, as potential treatment or prevention," the agency said.

"Ethical criteria must guide the provision of such interventions. These include transparency about all aspects of care, informed consent, freedom of choice, confidentiality, respect for the person, preservation of dignity, and involvement of the community."

The committee also advised that when any unlicensed products are used, "there is a moral obligation to collect and share all data generated," including that resulting from "compassionate use," meaning use apart from a clinical trial.

Kieny told reporters, "This is an opportunity to right a wrong of history—it's only relatively recently that researchers began investigating treatments for Ebola," a disease that was first recognized in 1976.

The ethics panel also agreed unanimously that there is a moral duty to conduct the best possible clinical trials in the context of the epidemic to gather the best evidence on their worth, the WHO said.

Three subjects that need more detailed analysis and discussion, the panel decided, are:

Though the group didn't suggest prioritization guidelines, said Kieny, there was some support for the view that HCWs should have priority, since they put their lives in danger. But others observed that the families of patients also face life-threatening risks and should have priority along with HCWs, she said.

Responding to questions, Kieny said the untried products in question include ZMapp, the antibody mixture that has been given to two Americans and is being sent to Liberia to treat two doctors, along with several antivirals and two vaccines.

Mapp Biopharmaceutical, the maker of ZMapp, has used up all the doses it had but is working to make more, according to a Bloomberg Business Week report today. The antibodies are produced in genetically engineered tobacco plants.

Kieny said the number of EVD antivirals that have shown promise in monkey trials is more than three but fewer than 10. There are two vaccines, clinical trials of which could begin as soon as the end of September, she added.

When she was pressed about how soon any drugs might be available, she said that there is so much effort to advance development right now that the likely date keeps getting closer. "It's in flux right now," she said, but went on to suggest that some supplies might be available by November, December, or January.

"The fact that there is not a treatment for Ebola is a market failure," Kieny said. "It's a disease of poor people in countries where there is no market. . . . If it hadn't been for the investment of a few governments in the development of these drugs and vaccines, we'd be nowhere."

The US government has financed most of the research on Ebola interventions, along with the Canadian government and private companies, she added later.

In response to a question about whether the WHO would "broker" supplies of any Ebola drugs or vaccines, Keiny said, "We don't get involved in decisions as to who should get which drug at which moment. Discussion can occur between someone who has a drug or vaccine and someone who would like to obtain it."

Kieny acknowledged that the safety of HCWs could be at risk if an EVD treatment is made available but only to some, or if a vaccine becomes available but some people mistake it for a treatment. "It will be of utmost importance to have the right communication and also to engage with the community and healthcare workers to explain what these are and their scope," she said.

She also acknowledged that legal liability for adverse effects of an untried drug would be a concern for the manufacturing and others involved in providing it. "But I see a lot of good will by many stakeholders who want to do their utmost best to help patients in this terrible outbreak," she added.

Kieny also stressed that standard public health interventions like patient isolation, contact tracing, and infection control are the main tools for fighting EVD: "It's very important not to give false hope to anybody that Ebola can be treated. This is absolutely not the case now."

In other developments, the Liberian government said today it would treat two infected doctors with ZMapp, which would make them the first Africans to receive the treatment, according to a Chicago Tribune report. Lester Brown, Liberia's information minister, said the two physicians gave their consent to be treated, and the US Food and Drug Administration also approved the step.

Brown said the drug was expected to reach Liberia within 2 days.

Also today, a Spanish missionary priest who was flown home from Liberia after contracting EVD died in a Madrid hospital, the Associated Press (AP) reported. Media reports yesterday said Spain had obtained ZMapp for the 75-year-old man, but the hospital would not confirm that he had been treated with it, according to the AP.

At the WHO press conference, Kieny said she didn't know if the priest was given the drug.

Aug 11 WHO update on cases and deaths