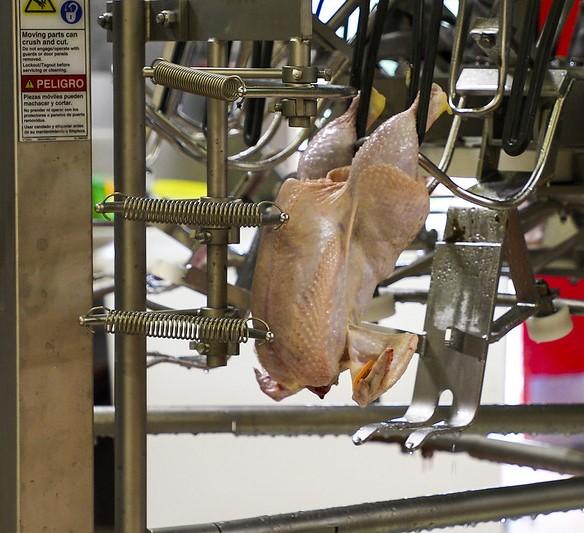 The study, published last week in Environmental Health Perspectives, found that retail meat samples from producers certified as organic by the US Department of Agriculture (USDA) had a significantly lower prevalence of multidrug-resistant organisms (MDROs) than meat raised conventionally.

The authors of the study, one of the very few to look into meat processors as a potential driver or modifier of antibiotic resistance or bacterial contamination in retail meat, suggest the findings could help broaden efforts to understand antibiotic resistance in the food chain and help keep consumers safe.

For the study, a team led by researchers with the Johns Hopkins University Bloomberg School of Public Health examined bacterial contamination data collected from 2012 to 2017 through the retail meat arm of the National Antimicrobial Resistance Surveillance Monitoring System (NARMS)—a joint program of the USDA, Food and Drug Administration (FDA), and the Centers for Disease Control and Prevention (CDC) that monitors antibiotic resistance in humans, food-producing animals, and retail meats.

The annual NARMS report provides surveillance data on antibiotic resistance levels detected in Salmonella, Campylobacter, Escherichia coli, and Enterococcus bacteria found in retail samples of chicken breast, ground turkey, ground beef, and pork chops from 19 states. NARMS also reports whether the meat is labeled as USDA-certified organic—a designation that signifies the animals did not receive antibiotics (with the exception of chickens, which can receive antibiotics on their first day of life)—and where the meat was processed.

"NARMS is the intersect between consumerism, government, and public health," said Gabriel Innes, VMD, PhD, who co-authored the study while at Johns Hopkins. "It's able to harness most aspects of the food-animal production sector, and elucidate what's going in terms of bacterial contamination, including contamination with antimicrobial-resistant bacteria, that could expose humans on the consumer end to harmful bacteria that could cause disease."

The researchers classified bacteria found in the meat samples as multidrug-resistant if it was resistant to at least three antimicrobial classes.

Overall, the study found that 1,422 of 39,348 meat samples analyzed (3.6%) contained at least one MDRO. Innes, currently serving as the antimicrobial resistance surveillance coordinator at the New Jersey Department of Health, said that while the overall prevalence of MDROs in retail meat samples was relatively low, it needs to be considered within the context of how often people eat meat.

"Humans interact and consume and cook with meat products regularly, sometimes at least three meals a day, so that number [represents] a pretty high risk when you're looking at the total number of products that people interact with daily, weekly, monthly, and annually," he said.

Innes said that one hypothesis he and his colleagues have is that the mandated cleaning and decontamination that split facilities have to perform between processing organic and conventional meats could be contributing to a lower overall bacterial burden. "That prevents this mixing of bacterial contamination from batch to batch," he said.

But that's hard to know, said study co-author Keeve Nachman, PhD, MHS, an associate professor at Johns Hopkins Bloomberg School of Public Health. NARMS doesn't capture data on cleaning processes at meat-processing facilities, and Nachman noted that information about how processing facilities are designated, and what types of procedures they follow, is "pretty bare bones."

One concern about the finding, said Nachman, is the implications it could have for industry-led proposals to speed up processing lines at meat processors.

"An increase may leave less time for cleaning, less time for the workers to take care to minimize any sort of spread [of bacteria]," he said.

Antibiotic resistance in the food chain

The authors say the study is significant because much of the research on the presence of antibiotic-resistant bacteria in food-animal production has focused on what happens on farms.

Food-producing animals in the United States, and many other parts of the world, are routinely given medically important antibiotics to prevent disease, and many public health and antibiotic resistance experts fear this is creating a significant reservoir of resistant pathogens that can find their way into the food system and cause human infections. But less attention has been paid to processing.

"A lot of our national discussion has been around production practices, and continuing that discussion is important," said senior study author Meghan Davis, DVM, PhD, also an associate professor at Johns Hopkins Bloomberg School of Public Health. "We need to do additional research in order to understand exactly what it is going on along that chain—whether it's the processor itself, or other factors associated with the processor—that could be important to help protect consumers from exposure to bacterial contamination and multidrug-resistant organisms."

Going forward, Davis said she would like to see better harmonization of the NARMS data on antibiotic resistance in retail meat with CDC data on antibiotic-resistant infections in humans and FDA data on animal antibiotic use, so that researchers can create a fuller epidemiologic picture of how the three are linked.

"You can see that there's a linkage, and you can look at the locations and the species involved, but you can't necessarily really dig in to try to understand all of the drivers that could be associated with this type of transmission, and those are the drivers you would want to target in terms of improving public safety," she said.

"I commend these government agencies for creating this network, but they're still siloed in how they approach this One Health problem," he said. "I think we're getting there, but we still have a long way to go."