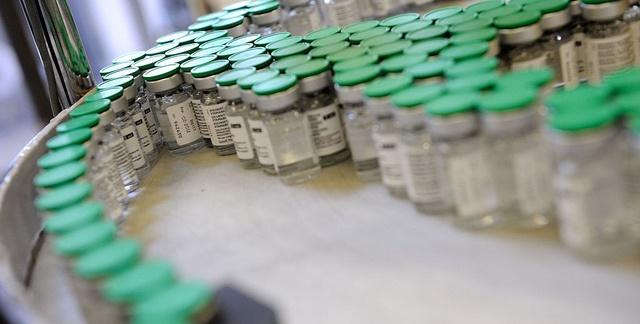 The vaccine supply being readied for shipment has more quadrivalent (four-strain) products in the mix this year., Sanofi Pasteur

Influenza vaccine producers recently began shipping the first doses of a US supply that's expected to top 150 million doses for the coming season, with more quadrivalent (four-strain) products in the mix this year.

The three biggest suppliers for the US market, Sanofi Pasteur, GSK, and Novartis, announced the start of vaccine shipments this month. Three others—MedImmune, bioCSL, and Protein Sciences—expect to start shipping their products soon. Most of the doses are given in the late summer and fall, though health officials stress that immunizations later in the season can still be beneficial.

Recent estimates from the companies suggest that they will produce a total of somewhere between 154 million and 160 million doses for the US market this season. That compares with 134.9 million doses distributed last season, according to Centers for Disease Control and Prevention (CDC) figures presented recently to the Advisory Committee on Immunization Practices (ACIP).

One new wrinkle this year is that the ACIP, which develops federal immunization advice, expressed a preference for use of the intranasal vaccine (FluMist, made by MedImmune) in children from 2 through 8 years old, because of evidence of higher efficacy in that age-group.

Several of the producers are providing quadrivalent vaccines, which contain two influenza B strains along with the standard two A strains (H1N1 and H3N2). The aim of including two B strains is to provide protection against both of the type B lineages, which circulate in varying and unpredictable proportions. Quadrivalent vaccines made their debut on the US market last year.

This year, the CDC expects that about half of the doses made for the US market will be quadrivalent, which is well above the share last year.

"Based on manufacturer projections for the upcoming season, we anticipate that approximately 50% of the vaccine produced will be quadrivalent vaccine," said Jeanne Santoli, MD, MPH, chief of the Vaccine Supply and Assurance Branch (VSAB) at the CDC's National Center for Immunization and Respiratory Diseases (NCIRD). She said quadrivalent vaccines generally cost more than trivalent ones.

Novartis and GSK first to ship

Novartis was the first producer to announce the start of vaccine shipments this year, which occurred Jul 2. In a press release, the company said it planned to ship 30 million doses of two flu vaccines—Flucelvax and Fluvirin—before the peak of the flu season.

Both vaccines are trivalent inactivated products. Flucelvax, for adults 18 and older, is manufactured in cell culture and was the first cell-based flu vaccine to be approved in the United States, in 2012. Fluvirin, made with traditional egg-based technology, is approved for everyone from age 4 on up.

GSK announced the start of its flu vaccine shipments on Jul 16, predicting that it would supply between 28 million and 33 million doses for the US market. The company makes trivalent and quadrivalent vaccines: Fluarix, Fluarix Quadrivalent, Flulaval, and Flulaval Quadrivalent, all of which are approved for ages 3 and older.

The first shipments were Fluarix Quadrivalent, GSK said in a press release. Shipments of the other three vaccines are expected to begin in early August.

The company's estimate of total production is somewhat lower than the 35 million doses it estimated in a presentation at the annual National Adult and Influenza Immunization Summitin May. Since then, US and Canadian regulators have raised some concerns about GSK's vaccine facility in Ste. Foy, Quebec, which makes Flulaval and Flulaval Quadrivalent.

The US Food and Drug Administration (FDA) told the company in a Jun 21 warning letter that 21% of the upcoming season's production had unacceptable bacterial counts and could not be used, according to previous reports. The Ste. Foy plant was scheduled to make about 23 million doses for the US market for 2014-15.

GSK said in its summit presentation that about two thirds of the doses produced this year would be quadrivalent.

Up to 65 million doses from Sanofi

Sanofi Pasteur, the biggest contributor to the US flu vaccine supply, reported in a statement last week that its first shipments went out on Jul 21. The company said it expects to supply at least 65 million doses, with shipments continuing through October.

Sanofi makes four flu vaccine formulations: Fluzone, Fluzone Quadrivalent, Fluzone High-Dose, and Fluzone Intradermal. The high-dose version is for people 65 and older, who have a weaker immune response than younger people. The company did not specify how many doses of each product are expected.

Another 16.5 million doses of vaccine are expected from bioCSL (formerly CSL Biotherapies), with shipping starting in August, according to company spokeswoman Natalie de Vane.

The company makes the trivalent inactivated vaccine Afluria. It is approved for ages 5 and older, but the ACIP currently recommends it for ages 9 and older, because of increased febrile reactions reported in Australia in 2010 in younger children who received an associated vaccine, Fluvax.

MedImmune, maker of FluMist, expects to distribute between 14 million and 15 million doses of the nasal-spray vaccine in the United States this season, according to company spokeswoman Melissa Garcia. That compares with about 13 million doses distributed last year.

Garcia said last week that the first shipments of the vaccine were expected to begin before the end of this month. Since last year, MedImmune has produced only a quadrivalent formulation of FluMist. The vaccine is approved for ages 2 through 49.

How the new ACIP recommendation on use of FluMist in 2- to 8-year-old children will affect demand for the vaccine is difficult to predict, said Santoli of the CDC. "Clinician recommendations play a big role in patients' vaccination decisions. It will depend on how that recommendation is put into practice at the level of patient care," she commented.

A smaller portion of the US flu vaccine supply comes from Protein Sciences Corp., maker of the recombinant egg-free vaccine FluBlok. The company announced in June that it expected to make up to 500,000 doses for this season, about twice as many as last year, with doses available from a broader distribution network. The first doses are expected to be available in September.

FluBlok, approved for ages 18 to 49, is made by using a baculovirus to infect insect cells, prompting them to produce the influenza hemagglutinin protein. Last year was the product's first full season on the market.

Because FluBlok is made without using eggs, last year the ACIP recommended it for use in people ages 18 to 49 who have an egg allergy of any severity.

bioCSL presentation from National Adult & Influenza Immunization Summit in May

Information on the 2015 National Adult and Influenza Immunization Summit