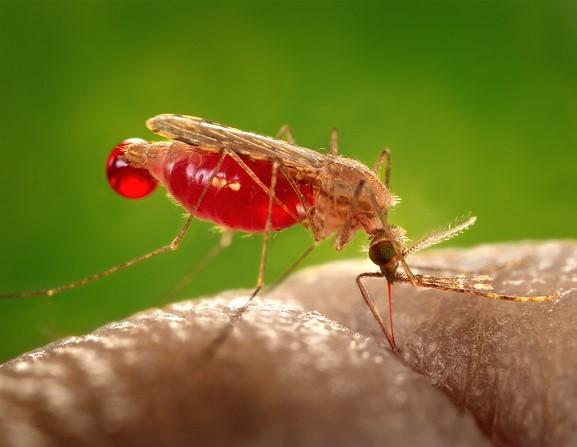 An aggressive strain of drug-resistant malaria that originated in Cambodia has rapidly spread into neighboring countries, causing high rates of treatment failure to first-line treatment and complicating efforts to eliminate the disease, according to two studies published yesterday in The Lancet Infectious Diseases.

One of the studies found that the KEL1/PLA1 strain of Plasmodium falciparum, the parasite that causes malaria, now accounts for more than 80% of the malaria parasites in northeastern Thailand and Vietnam, and has acquired new genetic mutations that have enhanced its fitness and ability to resist treatment. The strain is resistant to dihydroartemisinin-piperaquine, a form of artemisinin-based combination therapy (ACT) that has been the first-line treatment for malaria in Cambodia for more than a decade, and was more recently adopted as the preferred treatment in Thailand and Vietnam.

The other study found that the average failure rate for dihydroartemisinin-piperaquine treatment in Cambodia, Vietnam, and Thailand is now 50%, which suggests a new front-line option is needed to battle the mosquito-borne disease in those countries.

A 2018 study in The Lancet reported that KEL1/PLA1 parasites first appeared in western Cambodia in 2008, shortly after dihydroartemisinin-piperaquine was introduced, and by 2013 had migrated to northern Cambodia and Laos. By 2015 and 2016, they had been identified in Thailand and Vietnam. Resistance to the treatment was first reported in Cambodia in 2013.

"These worrying findings indicate that the problem of multidrug resistance in P falciparum has substantially worsened in southeast Asia since 2015," Professor Olivo Miotto, PhD, of the Wellcome Sanger Institute and University of Oxford, who was involved in both studies, said in a Lancet press release.

Mortality concerns lead to limited use

To determine how aggressively the KEL1/PLA1 co-lineage has invaded the countries of the region, and the type of genetic mutations that have driven the spread, Miotto and a team of researchers analyzed whole-genome sequencing data from P falciparum samples collected from malaria patients in Cambodia, Laos, northeastern Thailand, and Vietnam from 2008 through 2017. The data came from the MalariaGEN P falciparum community project, which provides researchers with sequencing data on samples from 28 countries.

From a data set of 1,673 whole-genome sequences, the researchers determined that 1,615 had KEL1/PLA1 status, and that the prevalence of the co-lineage—a combination of an artemisinin-resistant lineage that carries mutations to the kelch13 gene and a piperaquine-resistant lineage that carries amplifications of the plasmepsin 2 and 3 genes—increased steadily over the 10-year study period. Before 2009, KEL1/PLA1 was only in western Cambodia, but by 2016-2018 it accounted for more than 50% of samples in all the countries except for Laos. More than 80% of the most recent samples in northeastern Thailand and Vietnam were KEL1/PLA1.

Further analysis showed that KEL1/PLAI parasites were genetically similar to each other, regardless of their geographical origin, but that several, highly related subgroups had emerged since 2016, with the three largest subgroups found in Cambodia, Laos, and Vietnam.

Parasites in these subgroups were found to carry mutations in the crt gene that have been linked to increased resistance to piperaquine. The analysis also found that four distinct crt mutations had risen in frequency over time, suggesting that they might be giving the KEL1/PLA1 parasites a selective advantage over other P falciparum parasites.

"Our data suggest that multiple KEL1/PLA1 subgroups were able to spread rapidly across borders in separate transmission waves, following the acquisition of one of several mutually exclusive crt mutations, which have emerged on a complex genetic background, including a constellation of other crt mutations that have accumulated over decades in eastern southeast Asia," the researchers write.

As the results of the other study show, the spread of KEL1/PLA1 is having a demonstrably negative impact on malaria treatment in the region.

The results are from a multi-country randomized controlled trial—the Tracking Resistance to Artemisinin Collaboration (TRACII) trial—in which patients were assigned to receive dihydroartemisinin-piperaquine with or without mefloquine. The addition of mefloquine to the regimen is being evaluated in countries with artemisinin-resistant malaria. Data from the group of patients treated with dihydroartemisinin-piperaquine was so concerning that the researchers felt the need to report the results before the trial was completed.

Among the 140 patients treated with dihydroartemisinin-piperaquine from September 2015 through January 2018, the overall efficacy at day 42 was 50%, with treatment failure rates of 87.3% in northeastern Thailand, 61.8% in western Cambodia, 52.9% in southwestern Vietnam, and 26.6% in northeastern Cambodia.

The researchers also found that the risk of treatment failure was strongly associated with crt mutations, and that the prevalence of these mutations had risen substantially. In an earlier trial (TRAC1, conducted from 2011 through 2013), only 5% of resistant P falciparum parasites carried the crt mutations, compared with 73% of parasites in the current trial.

The authors of the study say that given the alarmingly high rates of treatment failure, dihydroartemisinin-piperaquine "should no longer be used for the treatment of P falciparum malaria in the eastern Greater Mekong subregion." In response, Cambodia has already changed its first-line treatment to another ACT, artesunate-mefloquine.

Although the full results of the trial aren't expected to be published until later this year, the authors say the preliminary results indicate that the "triple ACT" therapy (dihydroartemisinin-piperaquine plus mefloquine) was "fully efficacious" in treating patients in Cambodia, Thailand, and Vietnam, and could be a viable alternative treatment. But they warn that unless malaria is eliminated from the region, highly resistant strains could spread even further, in the same way that chloroquine-resistant malaria spread from the Greater Mekong to southeast Asia and India in the 1950s and 1960s, and eventually to sub-Saharan Africa in the 1980s.

The potential spread of ACT-resistant malaria to Africa is particularly worrisome, since 90% of malaria-associated deaths occur on the continent.

"Expansion and further spread of very difficult to treat, highly resistant P falciparum would cause a regional and potentially global health emergency," they conclude.