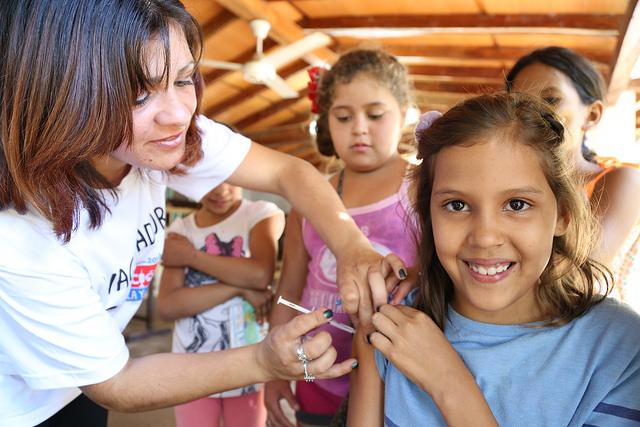 Global health officials today at Pan American Health Organization (PAHO) headquarters in Washington, DC, announced that the Americas region has become the world's first to eliminate rubella, the result of a 15-year effort targeting the disease.

The announcement came after an international expert committee met last week to review the evidence, with the group finding no sign of endemic transmission of rubella or congenital rubella syndrome (CRS) for 5 consecutive years, exceeding the 3-year requirement for declaring elimination of the disease, also called German measles, PAHO said today in a press release.

English-speaking Caribbean countries conducted mass rubella vaccination campaigns among adolescents and adults in the late 1990s, and vaccine procurement support from PAHO helped lower the cost of the vaccine. That step allowed 250 million adolescents and adults in the 32 countries and territories to be vaccinated against the disease from 1998 to 2008.

Other groups that have worked on rubella and measles elimination include health agencies from the United States and Canada, the Measles-Rubella Initiative, and several nongovernmental organizations, such as the March of Dimes and the Church of Jesus Christ of Latter-Day Saints.

Measles next in the cross-hairs

In 1994 PAHO member countries set goals of eliminating measles by 2000 and in 2003 targeted rubella for elimination in 2010. The expert committee said last week that it hoped to declare the region free of endemic measles in the near future.

Carissa Etienne, MD, PAHO director, said in the release, "The fight against rubella has taken more than 15 years, but it has paid off with what I believe will be one of the most important Pan American public health achievements of the 21stcentury," she said. PAHO estimated that before mass rubella immunization, about 16,000 to 20,000 children in the region were born with CRS-related birth defects each year.

"Now it's time to roll up our sleeves and finish the job of eliminating measles, as well," Etienne added.

Rubella and CRS are the third and fourth vaccine-preventable diseases to be eliminated from the Americas. Concentrated public health efforts eliminated smallpox in 1971 and polio in 1994.

Margaret Chan, MD, MPH, director-general of the World Health Organization (WHO), said in the statement that 3 years ago, countries agreed to a Global Vaccine Action Plan, which set a goal of eliminating rubella from two WHO regions by the end of 2015. "I congratulate the Americas region for the being the first region to achieve this."