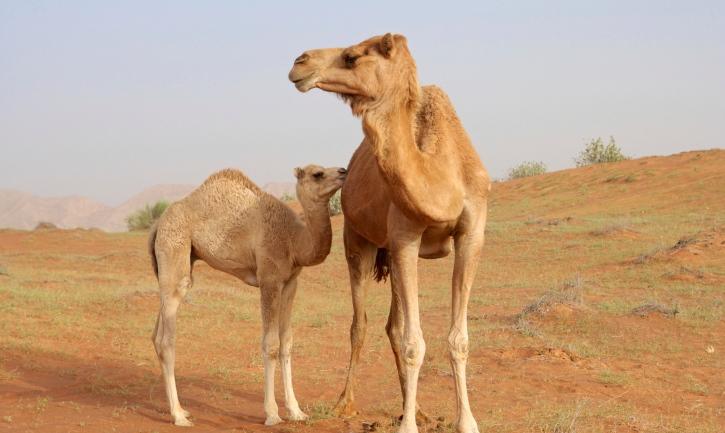 Last year camels were implicated as a possible source of the Middle East respiratory syndrome coronavirus (MERS-CoV) in humans. Now researchers say they have found a brand-new coronavirus in camels in the United Arab Emirates (UAE).

Scientists from Hong Kong and the UAE found the new virus in 4.8% of fecal samples from 293 dromedary camels in the UAE, according to their report in Emerging Infectious Diseases. The new virus, like MERS-CoV, is classified as a member of the betacoronavirus group.

Furthermore, the researchers found that nearly all the camels also carried antibodies to MERS-CoV, suggesting that they had been exposed to it previously. That finding is consistent with several other recent studies that found antibodies to MERS-CoV or a closely related virus in dromedary camels in the Middle East.

The take-home message, the researchers say, is that viruses in camels bear close watching to understand the potential for transmission to humans, given the high level of contact between humans and camels.

In December researchers reported that dromedary camels on a farm in Qatar were infected with a MERS-CoV strain nearly identical to that found in two people associated with the farm, but they couldn't determine whether the camels infected the humans or vice versa. Pointing out that few MERS patients have reported contact with camels, experts have said that the link between MERS-CoV in camels and humans has not been fully established.

The authors of the new study, led by Patrick C.Y. Woo, MD, of the University of Hong Kong, note that a number of new coronaviruses have been discovered in recent years, including the SARS coronavirus in 2003, two more new human strains in 2004 and 2005, and MERS-CoV. They said they have discovered 20 new animal CoVs in bats and birds.

Accordingly, they studied samples from camels in Dubai, UAE, to learn more about the evolution and dissemination of coronaviruses. The fecal and serum samples they used were leftover ones that had been submitted for pathogen screening or preventive health screening to the Central Veterinary Research Laboratory in Dubai between January and July of 2013.

Fourteen (4.8%) of the fecal samples, including one from an adult and 13 from calves, tested positive by polymerase chain reaction (PCR) for the CoV RdRp gene. Ten of the 14 samples had been submitted to the lab for routine checking, while the other 4 were submitted because the camels had diarrhea.

The researchers subsequently analyzed the complete genomes of three isolates of the new virus, which they named dromedary camel coronavirus (DcCoV) UAE-HKU23.

They determined that the amino acid sequence of the virus's spike protein is most similar to that of bovine coronavirus (BCoV) and sable antelope CoV. Also, the virus had a membrane protein similar in length to betacoronavirus lineage A1 members and was closely related to them. The lineage includes BCoV, sable antelope CoV, equine CoV, and several others, but not MERS-CoV.

By applying a "clock model" to the gene sequences, the authors estimated that DcCoV UAE-HKU23 diverged from BCoV about 46 years ago.

Attempts to grow the virus in cell cultures were unsuccessful. In other tests, the team found that 31 of 59 camel serum samples (52%) were positive for antibodies to the new virus's nucleocapsid protein in a Western blot analysis.

The team used three different tests for antibodies to MERS-CoV and found that 97% to 98% of the serum samples (57 or 58 of 59) were positive, though there was no evidence of the virus itself.

Also, three samples that tested positive for antibodies to the new virus showed little sign of antibodies to other coronaviruses, including SARS-CoV, indicating minimal cross-reactivity.

The authors said the camel samples that contained DcCoV UAE-HKU23 did not all come from the same site, which, along with genetic evidence, indicated that they were not all part of a single outbreak. They also commented that the presence of diarrhea in four of the infected camels raises the question whether the virus causes illness in the animals.

No correlation between new virus and MERS-CoV

In their conclusion, the authors note that diseases such as brucellolosis can occasionally spread from camels to humans and that viruses from at least eight different families, aside from coronaviruses, have been known to infect camels.

"Because camels are closely associated with humans, continuous surveillance of viruses in this hardy group of animals is needed to understand the potential for virus emergence and transmission to humans," they write.

In commenting on the findings, Marion Koopmans, DVM, PhD, head of virology at the Laboratory for Infectious Diseases of the National Institute of Public Health and the Environment in the Netherlands, said, "This work provides full confirmation of prior studies suggesting presence of coronaviruses related to bovine coronavirus in these animals."

Concerning the finding of MERS-CoV antibodies in the animals, she told CIDRAP News, "Finding a high proportion of camels [with] antibody positive to MERS CoV is now business as usual."

She added that it's important that the team showed that the MERS-CoV serology results cannot be explained by exposure to the novel virus.