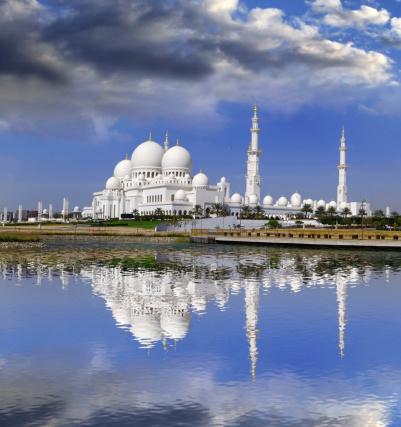 MERS investigators from the WHO visited both Dubai and Abu Dhabi, whose Sheikh Zayed mosque is pictured., extravagantni / iStock

Infection control breaches led a list of factors that contributed to the April surge of MERS-CoV cases in the United Arab Emirates (UAE), the World Health Organization (WHO) said today after a team of WHO and partner experts spent 5 days assessing the situation there.

The UAE has reported 70 MERS-CoV (Middle East respiratory syndrome coronavirus) cases, according to a report yesterday from the European Centre for Disease Prevention and Control (ECDC). About 40 of those were identified in April, and many involved healthcare workers, says a case list maintained by FluTrackers, an infectious disease news message board.

Meanwhile, no new MERS cases were reported in Saudi Arabia or elsewhere today as of this writing. The Saudi health ministry's MERS Web site was down much of the day.

And both the WHO in its UAE report and a UK expert contacted by CIDRAP News underscored the need for case-control studies in the region.

Most UAE cases linked to one hospital

In a statement today, the WHO said its own experts and partners from the Global Outbreak Alert and Response Network (GOARN) went to the UAE at the government's invitation to assess the MERS-CoV situation and risk.

"The team visited the hospital to which two-thirds of the country's cases can be traced, in order to review the epidemiological investigation and assess the infection prevention and control measures that have been applied," the agency said. The team also met with public health officials in Abu Dhabi and Dubai and evaluated the efforts to investigate possible exposure routes, transmission patterns, and the clinical situation.

"The preliminary result of the mission indicates that the cases in UAE do not show evidence of sustained human to human infection," the WHO reported. "The recent upsurge of cases in Abu Dhabi appears to have been caused by a combination of factors, including a breach in infection prevention and control measures in health care settings, active surveillance and increase in community acquired cases."

The agency did not give any details on the infection control gaps or the increase in community-acquired cases.

Peter Ben Embarek, WHO team leader, commented, "We are impressed by the amount of data and information generated during the investigation of MERS cases by UAE to help better understand MERS-CoV. This knowledge is of utmost importance to the rest of the world to better discover the source of the virus and the routes of transmissions from animals to humans."

The WHO recommended that the UAE continue to investigate MERS cases and cited a need for all countries affected by MERS-CoV to share experience and knowledge about it.

As it has done repeatedly, the agency stressed the need for multi-country case-control studies on both human and animal infections.

"There are opportunities to do joint analysis of samples from infected camels and the infected humans around them," the agency said. "These studies will help understand the role of camels in the disease—particularly how human infection happens.

"This information will help inform people who are in close contact with camels to gain a realistic picture of the risk, and the level of precaution needed."

The need for case-control studies and better infection control was also strongly emphasized today by David Heymann, MD, a global health and infectious-disease expert and board chair of Public Health England, in comments to CIDRAP News.

Reflecting on the recent surge of MERS cases in the Middle East, especially Saudi Arabia, Heymann commented, "Two things need to be done: they need to understand how people are getting infected, so they can prevent it, and the second thing is to clean up infection control in hospitals so they don't transmit the virus from patient to patient or from patients to health workers."

Heymann, who is also head of the Centre on Global Health Security at Chatham House, London (the Royal Institute on Foreign Affairs), said MERS-CoV information has been emerging in "piecemeal" fashion so far, which contrasts with what happened during the SARS coronavirus outbreak in 2003.

"Each time we get a new glimpse of what's going on," he said. "We won't have the full picture until there's a coordinated response."

During the SARS (severe acute respiratory syndrome) episode, clinicians and epidemiologists around the world were working together, making for an effective response, he observed. "This (MERS) has been going on for 2 years; SARS went on for about 6 months, or not even that."

Heymann said he doesn't know if any case-control studies are about to be launched. "I understand that WHO is there [in Saudi Arabia] again with a team, and many different agencies are offering to participate, but I haven't heard the outcome of those discussions yet," he said.

He said that what's needed in Saudi Arabia is "an understanding by the top level of the government that people are dying. . . . If they want to prevent sickness and death, they need to find out how people are getting infected. There are lots of clues, but there's no definitive understanding of how the transmission occurs."

As for the role of camels, Heymann said it's not yet clear if they are the source of human cases: Researchers "found a similar virus, camels and humans have the same virus, but who's infecting who? Until they do that case-control study, they won't be able to prevent this effectively."

Jun 6 WHO statement on UAE mission