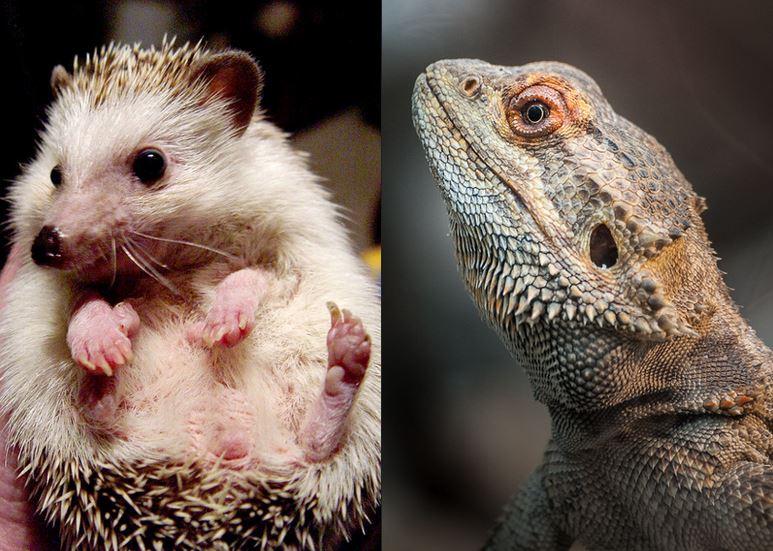 The Centers for Disease Control and Prevention (CDC) today announced two separate outbreaks of Salmonella in states across the United States, totaling 43 cases.

Through whole-genome sequencing, public health investigators have traced the outbreaks to hedgehogs (Salmonella Typhimurium) and bearded dragons (Salmonella Muenster), but no common source for either has been found yet.

Although the CDC has listed no new cases as of Sep 22 and Sep 25 for the bearded dragon– and hedgehog-related cases, respectively, it takes about 2 to 4 weeks from when the illness occurs for it to be added to the investigation numbers.

From Apr 12 to Aug 11, officials have reported 32 cases of Salmonella Typhimurium in people related to hedgehogs, with 5 people requiring hospitals. No deaths have been reported.

Interviews with 23 of the affected people have revealed that 16 (70%) were in contact with a hedgehog before exhibiting symptoms, and the bacterial strain has been identified in samples from a hedgehog of an ill person in New York. Overall, the hedgehogs have come from a variety of sources such as pet stores, online stores, and breeders.

The outbreak has affected children as young as 1 and adults as old as 71, with the median age being 10 years old. Cases have come from 17 states, with Michigan and Texas reporting the highest cases, at 4 each. There may actually be more hospitalizations, as complete information is only available for only 27 of the 32 cases.

Salmonella Typhimurium is the same strain that was found in 2012 and 2019 outbreaks also linked to hedgehogs, according to the CDC. The former had 26 cases across 12 states, with 35% of patients needing to be hospitalized and 1 death—The Spokesman-Review reported that it was a man in his 90s.

The 2019 outbreak involved 54 cases across 23 states, with 15% of patients needing to be hospitalized and no deaths. When the investigations concluded for these past events, no single common source was identified.

Similar to the hedgehog-related outbreak, of the 13 people infected with Salmonella Muenster, 10 (77%) said they had contact with a pet bearded dragon before they got sick.

Cases have been reported in people from 1 to 72 years of age, with symptoms beginning from Feb 23 to Aug 22. While the median age of affected people is 15, five (38.5%) cases are in children under 5 years of age. Seven of the 11 fully known cases have included hospitalization.

The Muenster strain was confirmed in the samples and environment of a bearded dragon in the home of an ill person in Virginia, but as a whole, the bearded dragons were bought from pet stores in multiple states. Thus far, Pennsylvania has reported three cases, the most of any state.

While bearded dragons and hedgehogs can be considered pets, they also can carry Salmonella bacteria in their droppings. The pets may look clean and healthy, but the bacteria can still be on their skin, surroundings, or care products.

Because of this, the CDC recommends that pet owners wash their hands after any interaction with the animal and its environment, and it advises that owners keep the pet and its products away from any place they store, prepare, or eat food.