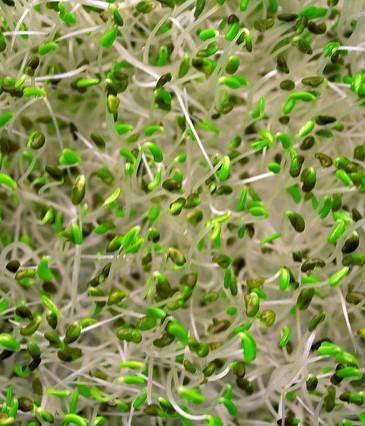 A Salmonella outbreak tied to raw spouts served at Jimmy John's restaurants has sickened eight people in three states, the US Centers for Disease Control and Prevention (CDC) announced on Jan 19.

Since 1996, fresh or lightly cooked sprouts have been linked to at least 30 reported foodborne illness outbreaks. Sprout seeds and beans need warm and humid conditions to grow, conditions that are also favorable for the growth of bacteria such as Salmonella, Escherichia coli, and Listeria.

Most ate at Jimmy John's in Illinois, Wisconsin

The patients sickened in the latest outbreak are from Wisconsin (5), Illinois (2), and Minnesota (1), and seven reported eating at multiple Jimmy John's restaurants in Illinois or Wisconsin, and all had raw sprouts on a sandwich at the restaurants.

The proportions of people who got sick after eating sprouts is significantly higher than a survey of healthy people, of whom only 3% reported eating sprouts after they were interviewed, the CDC said.

Illness onsets range from Dec 20, 2017, to Jan 3. Patient ages range from 26 to 50, and all are women. No hospitalizations or deaths have been reported.

The outbreak involves Salmonella Montevideo, and investigators are using PulseNet, the national subtyping network, to identify other illnesses that might be part of the outbreak.

Federal agencies, along with their state and local partners, and doing trace-back investigations at the six Jimmy John's restaurants where people got sick to learn where the sprouts were distributed and how they may have become contaminated.

Also, the CDC said antibiotic susceptibility testing on the Salmonella outbreak strain is under way.

Based on the developments, the CDC is urging consumers not to eat sprouts at Jimmy John's restaurants in Illinois and Wisconsin.

"Regardless of where they are served, raw and lightly cooked sprouts are a known source of foodborne illness and outbreaks," the CDC said. "People who choose to eat sprouts should cook them thoroughly to reduce the risk of illness."