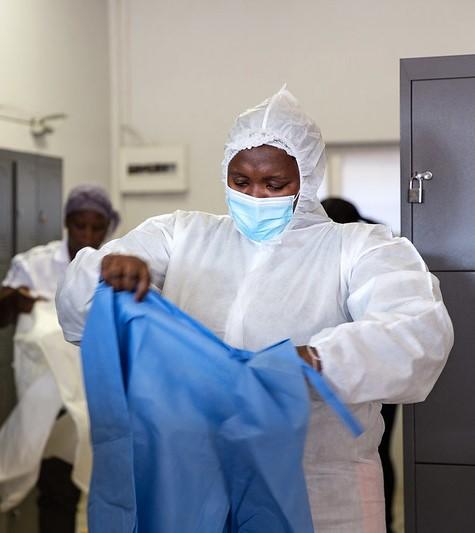 South Africa recently received 1 million doses of AstraZeneca-Oxford COVID-19 vaccine and was poised to start vaccinating healthcare workers, but yesterday, health officials announced a pause for the rollout to investigate early findings that it offered little protection against mild-to-moderate disease caused by the B1351 variant strain that's dominant in the country.

New questions about the vaccine come as World Health Organization (WHO) advisers this week consider it for emergency use listing, which if approved, would pave the way for lower income countries to receive their first doses though the COVAX program. The first shipments through COVAX depend on 350 million doses of AstraZeneca-Oxford vaccine.

The new findings, from a submitted preprint, come from researchers in South Africa and the United Kingdom. The study included 2,000 volunteers with a median age of 31. Along with minimal protection against mild-to-moderate illness, they also found that viral neutralization against the B1351 variant was substantially less when compared to the standard virus.

However, the team said they couldn't assess protection against severe disease, hospitalization, and death, because the study's target population was younger and at low risk for those outcomes.

In a press release from the University of the Witwatersrand in Johannesburg, the team said efforts are underway at Oxford to produce a second-generation version of the vaccine that targets variants that are similar to B1351.

Andrew Pollard, MBBS, PhD, chief investigator of the Oxford vaccine trial, said the study confirms that the virus will find ways to continue to spread in vaccinated populations, as expected, but promising results from other vaccine trials in South Africa using a similar virus vector suggest vaccines will still help ease the burden on health systems by preventing severe disease.

At a WHO briefing today, Salim Abdool Karim, MD, PhD, co-chair of South Africa's COVID-19 advisory committee, said concerns about vaccine efficacy against the B1351 variant deepened after Novavax reported 89% efficacy in the United Kingdom, but only 49% in South Africa.

He said officials paused the AstraZeneca-Oxford vaccine rollout to gather more clinical data to better understand the vaccine's effect, especially given the uncertainty about the impact on severe disease.

He said there are several caveats about the new South African trial findings, including that the number of participants was small and that confidence intervals were wide, with a 60% upper boundary range that approached the overall efficacy finding of the wider phase 3 study. He also said the dosing interval in the study was short, compared to newer longer intervals that have been proposed by AstraZeneca to improve immune response.

One proposal South African officials are considering is a stepped rollout, which would involve vaccinating an initial 100,000 people to monitor the vaccine's impact on severe disease, Abdool Karim said.

The B1351 variant was first found in South Africa, where it currently makes up 80% to 90% of cases. Along with the P1 variant detected in Brazil, it contains the E484K mutation, which is thought to help SARS-CoV-2 evade immunity to vaccines and natural infection. Scientists in the United Kingdom recently reported that a small number of B117 variants have developed the E484K mutation, raising wider concerns that ongoing evolutionary changes may dampen the impact of vaccination.

WHO advisors weigh emergency use

At today's briefing, WHO Director-General Tedros Adhanom Ghebreyesus, PhD, said the group's Strategic Advisory Group of Experts on Immunization (SAGE) met today to review the AstraZeneca-Oxford vaccine, and that tomorrow he will meet with SAGE's chair to discuss its recommendations.

Tedros said it's increasingly clear that manufacturers will have to adjust to virus evolution, taking the latest variants into account for future vaccines, including booster shots, similar to the process of updating flu vaccines. He said it's vital for countries to continue to report variants to the WHO, which is expanding its mechanism to provide guidance to manufacturers and countries.

Seth Berkley, MD, chief executive officer with Gavi, said as science evolves, health officials are learning more as they work with the vaccines, and noted that discussions like the one underway now about the AstraZeneca vaccine in South Africa are expected. He said there may also be changes in the way vaccines are used and in the make-up of the vaccines.

He said while officials wait for the SAGE guidance, it looks like the AstraZenca vaccine is efficacious and has been reviewed by a number of stringent regulatory agencies, and officials expect to continue to rollout the vaccine for COVAX while monitoring further studies.

Richard Hatchett, MD, chief executive officer for the Coalition for Epidemic Preparedness (CEPI), said at today's briefing that CEPI has announced more funding for studies to optimize and extend the use of existing vaccines, which could involve "mix and match" strategies to improve immune response.