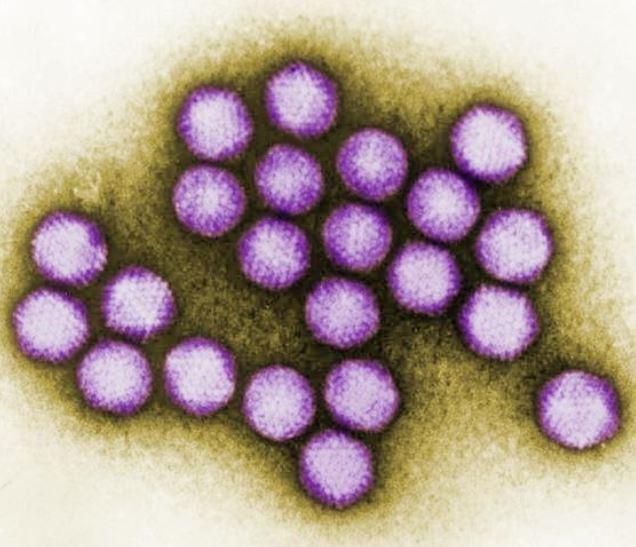 A cluster of adenoviruses, one possible culprit in the cases., CDC / Dr. G. William Gary, Jr

At a World Health Organization (WHO) media telebriefing today on a variety of global health issues, officials said 348 probable cases of hepatitis in children, potentially linked to adenovirus, have been reported from 20 countries across five global regions.

Phillipa Easterbrook, MD, MPH, senior scientist with the WHO, said 70 more cases from 13 countries are pending confirmation. She said the cases reflect a mix of new and retrospective cases and that 6 countries have reported more than 5 cases.

Over the past week, a team led by scientists from the United Kingdom has refined its hypotheses, with the leading one still suggesting adenovirus as a cause but also including a COVID-19 infection cofactor. So far, histologic examinations of liver tissue haven't shown liver inflammation due to adenovirus, she said, adding that the next focus is serologic testing to assess previous exposure to SARS-CoV-2.

In an outbreak update on Apr 23, the WHO said, "While adenovirus is currently one hypothesis as the underlying cause, it does not fully explain the severity of the clinical picture. Infection with adenovirus type 41, the implicated adenovirus type, has not previously been linked to such a clinical presentation."

According to media reports, South Korea is among the countries investigating a case. And in Canada, Toronto's Hospital for Sick Children is reporting seven related cases, according to CBC.

In a potentially related development, Ohio researchers recently published a case report about a previously healthy 3-year-old girl who experienced acute liver failure due to type 2 autoimmune hepatitis (AIH) associated with SARS-CoV-2 infection. The team published its findings on Apr 27 in the Journal of Pediatric Gastroenterology and Nutrition (JPGN) Reports.

She was evaluated for liver transplantation, but her condition rapidly improved with intravenous methylprednisolone, rifaximin, and lactulose. She also received azathioprine for maintenance immunosuppressive therapy.

The authors said SARS-CoV-2 has been associated with other autoimmune diseases in adults. "Although it is impossible to directly prove that SARS-CoV-2 infection caused AIH in this patient, the temporal association of infection with subsequent liver failure cannot be ignored," they wrote.