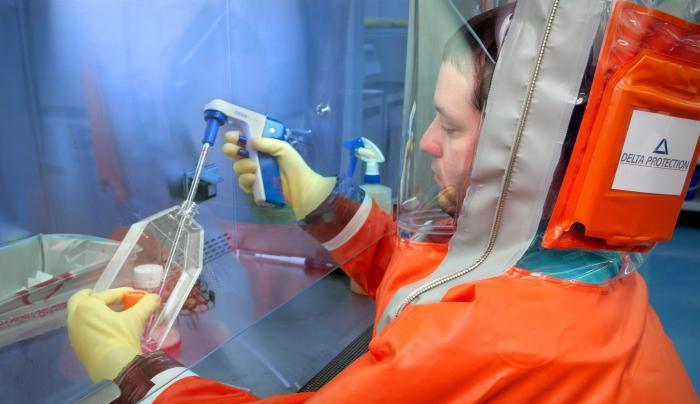 The US Centers for Disease Control and Prevention (CDC) today released a report on its investigation into a June anthrax incident at one of its labs, a process that led to new revelations that another of its labs unintentionally sent a sample containing highly pathogenic H5N1 avian influenza to another lab.

In a new development regarding another pathogen incident at a federal lab, CDC Director Tom Frieden, MD, MPH, said ongoing tests on six vials labeled "variola" that had been abandoned in a Food and Drug Administration (FDA) lab on the National Institutes of Health (NIH) campus yielded live smallpox virus.

He called the three lab incidents serious and troubling, and said workers at CDC's labs, as well as the American people, depend on the CDC to protect their health. "These events should never have happened," he said. "CDC labs are a national treasure—a national reference lab for the world."

Frieden said the incidents serve as a wake-up call for the CDC to explore system changes that can prevent problems in the future. "The culture of lab safety needs to improve at some CDC labs."

In response to the recent events, the CDC ordered a moratorium on the transfer of biologic material between and outside of its high-containment labs, pending a review by an advisory committee. It also announced other response steps recommended in the anthrax report, along with others designed to address all three of the lab incidents.

The CDC formed a high-level working group to speed lab safety improvements, lift the moratorium on the transfer of materials from the labs, and transfer lab safety accountability to a single point person on lab safety called for in today's anthrax report.

Frieden said the agency is putting together an external advisory group on lab safety, has launched an investigation to pin how the H5N1 virus contaminated another avian influenza virus in a CDC lab, and has established an internal review group to explore the systems, procedures, and personnel issues that led to the events. He added that the agency is taking swift action on personnel issues related to the lab incidents.

The single point person recommended by the anthrax report is Michael Bell, MD, deputy director of the CDC's Division of Healthcare Quality Promotion.

Based on that report, the CDC also said the Bioterrorism Rapid Response and Technology (BRRAT) laboratory will not do any select agent work until reviews and approvals are conducted. Its scientists don't have access to any select agents, which have been placed in storage-only mode, where they will remain until changes have been made to prevent similar future incidents.

The anthrax probe report noted that the high-containment (biosafety-level 3, or BSL-3) lab that prepared Bacillus anthracis samples for experiments in a lower-containment lab (BSL-2) used a method that may not have inactivated the samples. The procedure to kill the B anthracis cells involved formic acid/acetonitrile protein extraction.

Experiments at the CDC and the Michigan Department of Community Health to replicate the process found that the procedure completely inactivated the cells after 10 minutes, but CDC experiments using B anthracis spores found that a small number remained viable, even after 24 hours of treatment with the chemicals. The authors of the report said that result wasn't surprising, because the spores are known to be much more resistant.

A sterility check done by the BSL-3 lab, however, found that the anthrax preparation had not been inactivated after 10 minutes, but it had been extracted for 24 hours before staff transferred it to the BSL-2 labs.

Frieden said that, as CDC officials learned more about the event, they were reassured that workers weren't likely exposed to anthrax. Environmental tests at the labs were negative, and no employees have been sickened, though some were advised to take antibiotics and vaccines that can have uncomfortable side effects.

The investigation found multiple other problems, including a lack of standard operating procedure and oversight, he said. "Use of anthrax at all for this experiment shouldn't have been done," Frieden said, adding that the scientific literature had said the procedure wasn't a perfect method.

In the flu virus sample incident, the CDC said that earlier this year a culture of nonpathogenic avian influenza was unintentionally cross-contaminated with highly pathogenic H5N1 and shipped to a BSL-3 lab operated by the US Department of Agriculture (USDA).

Frieden said the incident happened 6 weeks ago, but he found out about it just 48 hours ago. He said the less harmful strain was H9N2 and that cross-contamination was discovered when a USDA lab worker noticed on May 23 that the virus wasn't behaving as a low-pathogenic strain.

The initial investigation suggests the cross-contamination occurred at the CDC lab, Frieden said. The virus sample was handled under enhanced BSL-3 conditions, and health officials say there is no threat to workers or the public.

The CDC said it closed the CDC lab, which will not reopen until adequate procedures have been established. It said further investigations and actions are under way.

Frieden said he found the incident distressing, not because of the health threat, but because of where the incident happened—the CDC's own flu lab. "To me, the fact that this could happen in such a superb lab is upsetting," he said, adding that the delay in reporting was unacceptable.

Frieden said that once the CDC learned of the smallpox samples, it quickly secured and retrieved them. He added that the samples haven't posed a risk to workers or the public.

On Jul 8 the CDC announced that old vials that appeared to contain smallpox were found in an unused part of a lab at the NIH campus. The lab was turned over to the FDA in 1972, and workers were getting ready to move the lab to its main campus in Silver Spring, Md.

The NIH will scour its entire campus to look for stray pathogen materials, he said.

Tissue culture results from two of the six vials show evidence of growth, based on tests under way under approved BSL-4 containment. Tests are ongoing on the contents of the other four vials, which could take as long as 2 weeks. The CDC will sequence the genes and will then destroy all of the samples, based on international protocols and under the supervision of the World Health Organization (WHO).

The vials, labeled "variola," were created on Feb 10, 1954, before smallpox eradication activities began and at a time when inventory control procedures weren't very advanced, Frieden said.

Regardless, the NIH and FDA are looking very closely at inventory control, he said.

Frieden said that, taken together, the problems yield lessons for other labs, and the CDC will incorporate what it learns, such as the weaknesses of the anthrax inactivation procedure, into its regulatory work with other labs.

Whatever side scientists take on the GOF influenza research debate, the events at the CDC lab are sure to have an impact, he said. "Clearly, the case is we really need to ensure safety and security."

The recent lab events at the CDC are likely to have a far-reaching impact on labs and influence the ongoing debate about GOF influenza research and other biosecurity issues, according to experts who commented on today's events.

Thomas Inglesby, MD, chief executive officer and director of the Center for Health Security at the University of Pittsburgh Medical Center, said it will be important to learn how the H5N1 contamination occurred at the CDC lab to adapt lab safety systems to prevent similar occurrences in the future. "But at a higher level, this shows that even in one of the most expert, highly qualified labs in the world, inadvertent events and human errors can occur," he said.

"While nontransmissible pathogen exposures in labs would typically carry a risk only to the lab scientists involved, the population at large could suffer the consequences in the event of an accident with a GOFengineered virus with pandemic potential." he said.

"This is why we need to reevaluate how things are now proceeding with GOF research."

Michael J. Imperiale, PhD, professor in the Department of Microbiology and Immunology at the University of Michigan Medical School, said everyone, including those who do GOF research, say their labs are secure. "But what we've learned this week is that accidents do happen."

Though some researchers refute the arguments of those urging more caution that accidental releases can occur, the incidents at federal labs show again that the concerns aren't theoretical, he said. "Errors occur."

Marc Lipsitch, PhD, director of the Center for Communicable Disease Dynamics at the Harvard School of Public Health, said the incidents at the CDC labs show that no lab is 100% safe. "The weak link may be human error."

A lab accident involving a pathogen unknown to the human population would raise the risk to a whole new level, he said, and he hopes the events serve as a warning about taking risks that could increase the magnitude of the problem.

Paul Keim, PhD, a microbiologist at Northern Arizona University, said each of the events presents a unique problem for the US government. For example, though the anthrax incident wasn't dangerous, it uncovered a systemic problem with the methods.

The smallpox incident poses a violation of an international treaty and puts the United States in a poor light regarding its ability to track its own samples, he said.

However, the problem involving the H5N1 sample could have been a high consequence event for the US economy, had it unknowingly infected poultry or another food animal, Keim said.

"The impact on animal production would have been devastating. You can't even quote a number that would capture that."

He said he thinks about the problems in many ways. The anthrax inactivation problem hints at a system-level and quality control problem. Though he doesn't have all the details on the experiments, it's not clear why the lab used formic acid as part of the process. "It's not the obvious way to kill [the pathogens]."

Keim, one of the nation's top anthrax researchers, said it's hard to keep B anthracis from sporulating, and that it takes a lot of special steps to curb that in experiments.

Efforts to examine and shore up the management structure are likely to have worthy payoffs in terms of future cost savings and efforts to address future problems, Keim said.

The problem with flu sample cross-contamination might have a technology fix in the future, he said, noting that most labs don't have the capacity to detect other strains in their samples before transfer to other labs. Innovations in the future might allow scientists to build that precaution into procedures.

Adel Mahmoud, MD, PhD, a professor in the Department of Molecular Biology at Princeton University, said the string of events is obviously disturbing, but shouldn't be overblown. He said the CDC has the most secure labs for studying dangerous pathogens in the world, but "human errors will happen anywhere in the world, despite our best efforts."

Mahmoud compared the anthrax problem to the 1955 "Cutter incident," when a polio vaccine thought to be inactivated infected about 40,000 children. "Anthrax is almost a mirror incident. We think it's inactivated, but it didn't happen completely."

The federal lab problems will influence the GOF debate and will likely have an impact on lab regulatory frameworks, not only nationally, but internationally, he said.

Mahmoud echoed Lipsitch's concerns that even GOF work done in secure laboratories, with highly disciplined systems, has a weak link. "There is a human element called human error," he said.

The number of high-containment labs expanded considerably after the Sep 11, 2001, terror attacks, and now the regulatory framework needs to be reviewed at the national level, which Mahmoud said will likely filter up to the international level.