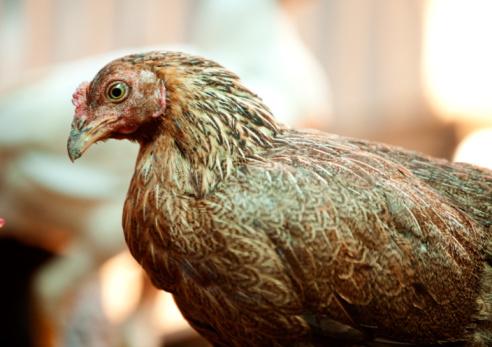 A survey of commercial poultry producers in India has revealed high levels of antibiotic resistance in chickens raised for meat and eggs, a finding researchers say could have serious health implications.

More than half of the E coli isolates tested were multidrug resistant (MDR), and nearly 60% were found to harbor extended-spectrum beta lactamase (ESBL), an enzyme that confers resistance to beta-lactam antibiotics.

The study also presents evidence that antibiotic resistance correlates with farming practices. After adjusting for the type of poultry farm, the researchers found that broiler farms were more than twice as likely to harbor antibiotic resistant E coli strains than layer farms, had a higher prevalence of MDR (94% vs 60%), and had a higher prevalence of ESBL-producing Enterobacteriaceae (87% vs 42%). That finding is likely linked to higher antibiotic use on broiler farms, which need to sustain rapid growth of chickens over short periods.

"We were certainly surprised by the high rates of MDR," Ramanan Laxminarayan, PhD, MPH, lead author and director of the Center for Disease Dynamics, Economics and Policy told CIDRAP News. "These are higher than reported in the United States or in other countries."

Laxminarayan and his colleagues say the findings are concerning, given the emerging evidence linking antibiotic use in food animals to growing antibiotic resistance in human health. The most documented route of transmission of resistant bacteria from the agricultural reservoir into human populations is through livestock workers, who can carry the bacteria into the community and into healthcare facilities, where person-to-person transmission can occur.

The spread of bacteria that are highly resistant to antibiotics used to treat a variety of human infections, such as fluoroquinolones and cephalosporins, could results in more severe and prolonged illnesses. The spread of ESBL-producing Enterobacteriaceae into healthcare settings poses an even bigger threat. These bacteria, which are MDR, can cause difficult-to-treat infections and transfer resistance across a wide range of bacterial species.

While this study doesn't provide a definitive connection between increasing farm use of antibiotics and the high rates of resistance found on the poultry farms, the findings do appear to reflect the largely indiscriminant use of antibiotics in the Indian poultry industry. Unlike the European Union (where the use of medically important antibiotics for growth promotion in food-producing was banned in 2006), and the United States (which instituted a voluntary ban starting in 2017), India does not regulate any antibiotic use in food animal production.

Questionnaires filled out by 16 of the 18 farms surveyed showed that 12 of them (75%) used antibiotics for growth promotion, rather than solely for disease treatment and prevention. And on both broiler and layer farms, the study found that use of antibiotics for growth promotion was associated with significantly increased odds of resistance for most antibiotics and a higher likelihood of MDR. One farmer noted, anecdotally, that antibiotics are more effective than hygiene or sanitation measures because unskilled farm workers are less likely to follow hygiene procedures.

The study also found higher odds of resistance among independent farms compared with contracted farms, which are owned by large poultry producers and have to adhere to the production process established by the producer. The authors say this finding could indicate that contracted farms are employing better hygiene methods and veterinary care and therefore using antibiotics more carefully than independent farms. "In contrast, independent farmers do not have a comparable support system and could be misusing antimicrobials to a greater degree," they write.

The problem is likely to get worse. According to the study, rising incomes and heightened demand for food animal products in India mean antimicrobial consumption in food animal production could grow by more than 300% by 2030. And that growth could be matched in other developing countries where antibiotic use in food animals isn't regulated.

Although the study concludes that ending nontherapeutic use of agricultural antibiotics "would be prudent to public health," Laxminarayan said he's not hopeful that lawmakers in India will do anything in the near future to end the use of antibiotics for growth promotion in animals.

But the study notes that countries such as Denmark have shown that restrictions can be placed on antibiotics in food animal production without negative impacts on productivity. And Laxminarayan said he thinks there are ways to promote more judicious use of antibiotics by food animal producers.

"The world can address this by giving farmers technical knowledge and perhaps subsidized inputs to raise poultry without having to resort to antibiotics," he said.