Study details flow of microbes in a new hospital 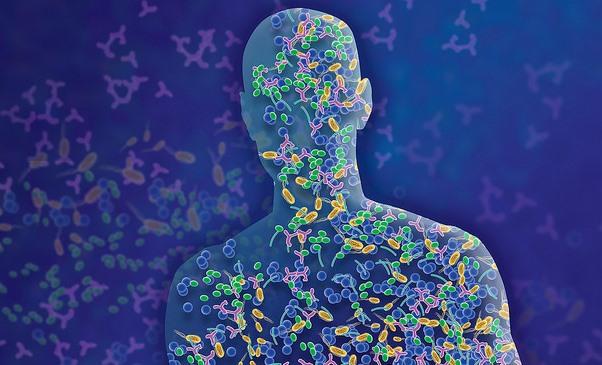 In December 2012, 2 months before the University of Chicago Medicine's Center for Care and Discovery opened its doors to patients, a team of scientists was hard at work swabbing surfaces in the new hospital.

The scientists were collecting bacterial samples for a year-long study to document the complexity and movement of microbial organisms within a hospital environment. The aim of the study, which its authors say is one of the largest microbiome studies conducted, was to develop a better understanding of how those microbes interact with patients, staff, and hospital surfaces, and how that interaction might affect hospital-acquired infections and antibiotic resistance. The study was published this week in Science Translational Medicine.

Collecting bacteria before the hospital was occupied by patients and staff enabled the scientists to establish a baseline, so they could understand which microbes were brought in to the environment from the outside, and how they evolved once they were inside the hospital.

"The entire plan was to find what happens when the hospital turns on," lead author Jack Gilbert, PhD, a professor of surgery and faculty director of the Microbiome Center at the University of Chicago, told CIDRAP News. "When it becomes operational, where do the microbes come from? And as you go through the life history of a hospital environment, how do the microbes exchange with the people?"

The investigators found an interesting ebb and flow of microbes, as well as evidence of gradually increasing bacterial resistance.

The day after the hospital doors opened, and for every single day over the next 10 months, Gilbert and his team returned for more swabbing. They collected samples from surfaces in 10 patient care rooms and two nursing stations that were likely to be in contact with skin, including floors, bed rails, countertops, faucet handles, and computer mouses. They also swabbed the hands and noses of patients and staff, along with the shoes, shirts, and cellphone of staff members.

Overall, the team collected more than 10,000 samples and detected microbial DNA in 6,523.

What they found once the hospital doors opened, unsurprisingly, was that the diversity of the microbial environment changed dramatically with the arrival of patients and staff. Prior to opening, the predominant bacteria were Pseudomonas and Acinetobacter. Afterwards, human skin-associated organisms such as Corynebacterium, Staphylococcus, and Streptococcus took over.

"People shed 38 million bacterial cells an hour, so that wasn't a big surprise to us," Gilbert said. "But it was comforting to see the dramatic shift from unoccupied to occupied.

Despite daily cleaning of the rooms, Gilbert and his team found that when new patients initially entered rooms, they would immediately begin to pick up the microbes left by previous patients and by staff on hospital surfaces. But within 24 hours, the flow of microbes started to reverse, from the patient back to the room. So over the course of a patient's stay, their skin and the room surfaces became microbially similar.

"What was most interesting was that people are in constant dynamic interaction with the microbiome around them," Gilbert explained. "You’re constantly depositing bugs but you're constantly picking them up as well."

That finding may not be very comforting, given the problem of healthcare-associated infections in hospitals. According to the Centers for Disease Control and Prevention, roughly 1 in 25 hospital patients has at least one healthcare-associated infection. The spreading and sharing of potentially infectious pathogens within the hospital environment is exactly what many hospitals are trying to prevent.

But for Gilbert, the constant movement of microbes suggests that the threat of acquiring bacterial infections in the hospital, though ever-present, may not be as big as we think.

"The vast majority of those microbial interactions are null and void and have no impact," he said. "The chances of you picking up something dangerous is incredibly small, because they are rare events." While hospitals can't prevent the constant movement of microbes, he added, they can figure out ways to reduce the likelihood that those rare events cause serious infections.

Over the course of the study, roughly 10% of the 252 patients who participated were found to have healthcare-associated infections. But interestingly, Gilbert and his team did not find the cause of those infections in the room samples, which suggests the patients might have carried those bugs in with them.

Over time, an increase in resistance genes

Another interesting revelation of the study involved antibiotic use. At least 90% of the patients in the new hospital were on either oral or intravenous antibiotics, according to Gilbert. And while those antibiotics, along with clinical treatments such as surgery and chemotherapy, did not appear to have any impact on the skin microbiome of the patients, Gilbert and his colleagues noticed something about the genetic makeup of the patient-associated organisms in the rooms of 92 patients who had months-long hospital stays: The longer the patients stayed in their rooms, the more antibiotic-resistance genes the organisms acquired.

Bacteria from room samples of these patients, which included Staphylococcus aureus and Escherichia coli, were found to have had an abundance of antibiotic-resistance genes.

Although he cautions that this finding needs further study, Gilbert hypothesizes that the selective pressure from antibiotic use and daily cleaning of the rooms was leaving behind bugs with a greater capacity to acquire resistance genes.

"Organisms don't acquire genes and maintain them unless there is a selective pressure for that maintenance," he said. "So the fact that they were in an environment that was inherently stressful…suggests that the organisms that were left over are the ones that have a greater likelihood of being able to acquire genes that could be relevant.

While the study has no direct clinical relevance at the moment, the hope is that this new understanding of the microbial equilibrium in hospitals, and how it affects patients, will provide context for future research into how healthcare-associated infections are transmitted.