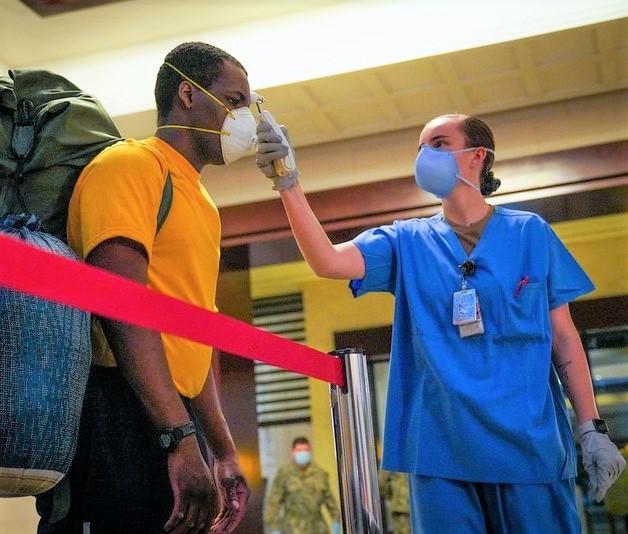 Daily case counts for new COVID-19 infections across the country seem to be settling into a high plateau of 50,000, as the nation marches toward the 5 million-case milestone, expected to be reached by early next week.

The high plateau means more deaths will likely follow in August, and new states, including Georgia, Missouri, and Tennessee, are seeing increasing daily counts. Over the last week, national daily death tolls have hovered around 1,000 fatalities.

Many states have shut down bars, mandated mask use, and limited elective surgeries again after seeing case counts soar earlier this summer. But the response has been a patchwork, with governors deciding how to respond to outbreaks without federal guidance.

Today in an interview with Politico, Anthony Fauci, MD,  director of the National Institute of Allergy and Infectious Diseases, said he was cautiously optimistic the country could avoid a nationwide lockdown.

"I think we can get through this without having to revert back to a shutdown if Americans uniformly wear masks, physically distance, avoid crowds and follow hand-hygiene recommendations," Fauci said. "When you have a weak link, then the whole system is unsuccessful."

A recording of the call was obtained by the Center for Public Integrity. Birx also warned that indoor family gatherings could turn into super-spreading events in these cities.

In the race to develop a vaccine more rapidly than ever before, Food and Drug Administration (FDA) Commissioner Stephen Hahn, MD, said his agency will not sacrifice safety or efficacy in an op-ed published yesterday in the Washington Post.

Hahn said his agency will likely begin this fall to determine which COVID-19 candidate is truly viable and when doing so will rely on data from large-scale clinical trials which must show a vaccine is effective in safely preventing COVID-19 in at least 50% of recipients.

Hahn's op-ed came the same day 400 scientists and experts wrote a letter to the FDA commissioner asking that any vaccine deliberations be made public. They said transparency will increase vaccine uptake and decrease vaccine hesitancy. "We need a safe and effective vaccine urgently, but any lack of trust in its properties could significantly compromise rollout," the letter concluded.

In related news, the Wall Street Journal reports that the first doses of a future vaccine will likely fall short of the 100 million doses needed to protect America’s nurses, doctors, essential workers, and nursing home residents. Instead, only 10 to 20 million doses will likely be available, which necessitates a federal plan for distributing limited vaccines.

A new poll from National Public Radio/Ipsos shows that two thirds of teachers prefer to start school online this year, and 82% are concerned about returning to in-person instruction in the fall.

Those numbers echo parents’ concerns in another new poll from the Washington Post-Schar School. Eighty percent of parents polled said they are in favor of having school partly online in the fall. Forty-four percent said they would prefer a hybrid plan that mixes online and in-person instruction. Only 16% said they favor full in-person school.

Most parents expressed growing anxiety about all the options for the 2020-21 school year. In related news, a new survey from the Commonwealth Fund found that 33% of Americans have experienced stress, sadness, or great anxiety since the start of the pandemic, a significantly higher proportion than in other high-income countries. Over 30% experienced negative economic impacts due to the pandemic, significantly more than in other countries.