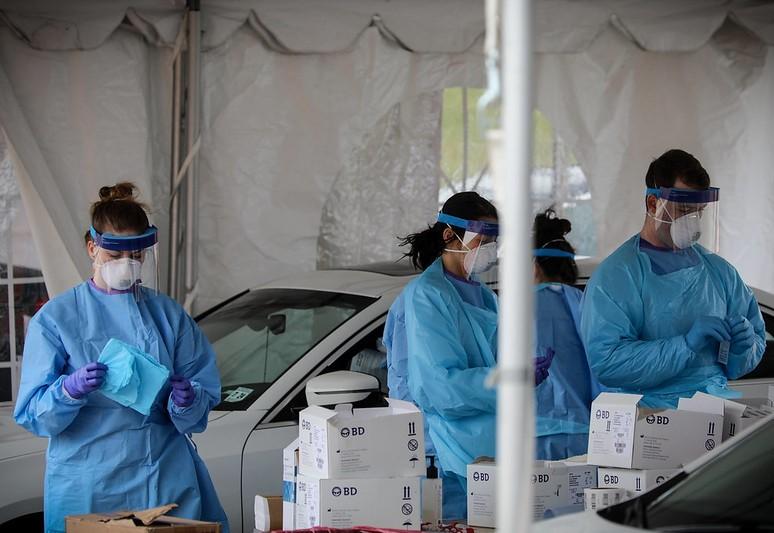 The global number of COVID-19 cases topped 300,000 today, with numbers soaring in western Europe and pandemic activity heating up in North America and other parts of the world

In the United States today, the US Food and Drug Administration (FDA) authorized an emergency use authorization (EUA) for the first point-of-care rapid test for the virus.

Italy's illnesses and deaths today soared again, and an ongoing surge in Spain lifted its case total past 20,000, putting the global total at 303,816. Also, confirmed US cases today approached 25,000, according to the Johns Hopkins online tracker, making it the fourth hardest-hit country in the world.

New Jersey is the nation's third worst-hit state and has reported 1,327 cases so far, 16 of them fatal. The state's main hot spot is Bergen County, which has reported 363 cases.

New Jersey is the fourth state to announce a shelter-in-place order. The others are California, New York, and Illinois.

In other US developments, Cepheid announced today that it has received an EUA for its rapid test for detecting SARS-CoV-2, the virus that causes COVID-19. The test can run on any of Cepheid's 20,000 automated systems worldwide and can give a result in about 45 minutes.

Cepheid, based in Sunnyvale, California, said it has nearly 5,000 systems in the United States that are capable of point-of-care testing. The automated systems don't require specialty training and can run 24 hours a day, 7 days a week. It added that the test will begin shipping next week.

In an FDA news release, Commissioner Stephen Hahn, MD, said, "Today marks an important step in expanding the availability of testing and, importantly, rapid results. Point-of-care testing means that results are delivered to patients in the patient care settings, like hospitals, urgent care centers and emergency rooms, instead of samples being sent to a laboratory."

Meanwhile, LabCorp, a company that processes specimens collected by state health departments and hospitals, announced yesterday that it will be able to perform more than 20,000 tests per day, doubling its capacity in 1 week, ahead of its original schedule.

With testing capacity in the United States still severely limited due to several factors, health officials in Los Angeles and New York City have announced changes in testing strategy, CNN reported. Los Angeles officials advise doctors to not test people who only have mild symptoms and to reserve testing for patients for whom the diagnosis would change clinical management, a strategy that shifts from containing the disease to slowing transmission and preventing excess morbidity and mortality. The Los Angeles policy targets testing to those with symptoms, health workers, nursing home residents, paramedics, and others at high risk.

On Twitter and at a televised White House coronavirus task force briefing today, President Trump said a combination of hydroxychloroquine and azithromycin have a chance to be "one of the biggest game changers in the history of medicine," apparently referencing a recent study from French researchers that appeared in the International Journal of Antimicrobial Agents.

At today's briefing, when asked about the drug's use in prophylactic (preventive) treatment, Anthony Fauci, MD, who directs the National Institute of Allergy and Infectious Diseases, said the evidence for the treatment was "anecdotal" and that it hasn't been studied for COVID-19 in a controlled clinical trial, so no definitive statements can be made.

Italy's health ministry today reported 6,557 new cases and 793 deaths, boosting its respective totals to 53,578 and 4,825. The country's government announced new restrictions to further limit movements, shutting down parks and urging people to stay indoors, Reuters reported. The story also said Italy's death count is much higher than the official total, because many sick elderly people are dying in their homes or in nursing homes without having been tested for COVID-19.

Elsewhere in Europe, Germany's total grew by 2,705 more cases, for a total of 16,662, according to the Robert Koch Institute. And France's health ministry warned of a rapidly worsening epidemic, with 14,459 cases reported so far, 562 of them fatal, Le Monde reported, citing the country's health ministry. The report said 6,172 people are hospitalized, including 1,525 who are in intensive care units (ICUs). Half of the ICU patients are people younger than 60.

Iran today reported 966 cases, down from 1,237 new cases reported yesterday. The country's totals now stand at 20,610 cases, 1,556 of them fatal, according to the health ministry.

Some South American nations are reporting steady rises in COVID-19 activity, and Colombia today announced a national quarantine in effect until Apr 13, Reuters reported. The country, which has a population of 49 million, has reported 158 cases, none of them fatal.

Argentina recently announced a similar measure, and the governor of Brazil's most populous state, Sao Paulo, announced a quarantine in effect until Apr 7, Reuters reported. So far, the country has reported 904 cases, 18 of them fatal.

Elsewhere, China today for the third day in a row reported no new local cases, though it did report 41 more imported cases, according to its National Health Commission.