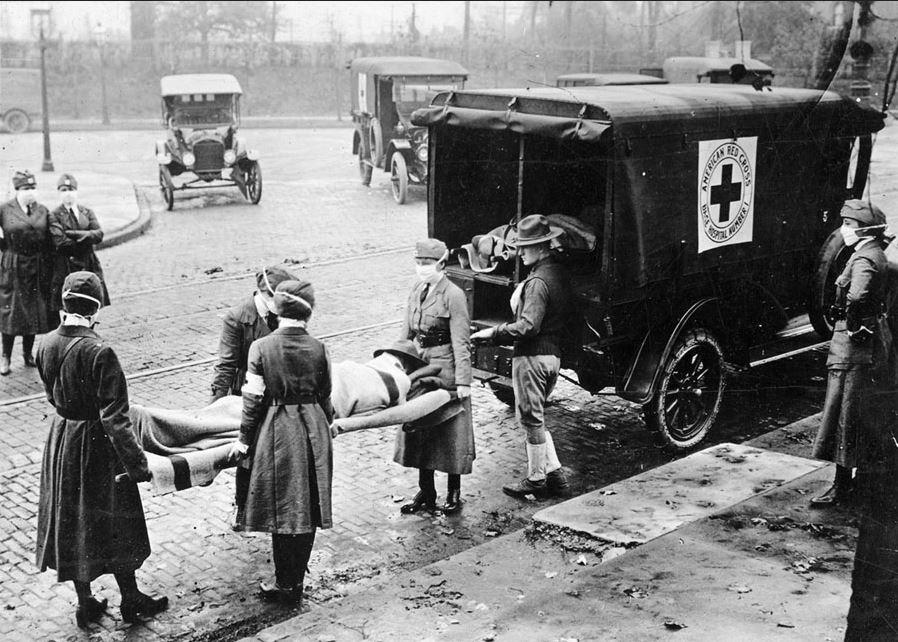 In 2004 historian John M. Barry wrote the definitive book on the 1918 Spanish flu pandemic. Between 1918 and 1920, 675,000 Americans, many of them previously healthy young adults, died from a novel H1N1 strain of flu as it swept across the country in waves.

Comparing the current COVID-19 pandemic to the 1918 pandemic has been common in recent weeks. In an interview with CIDRAP News, Barry shares what's the same, what's different, and why he's glad historians don't have to predict the future.

When the coronavirus pandemic first began in this country, the president said it was no worse than seasonal flu. Did leaders in 1918 say anything similar during the first spring wave of that pandemic?

Yes. National public health leaders were saying things like, "This is an ordinary influenza by another name," and, "You have nothing to fear if proper precautions are taken."

We know the pandemic in 1918 was caused by an influenza virus, and a coronavirus is a different animal. But what are some similarities and differences in terms of the actual illnesses people experienced?

You know, it's not clear how many people died from ARDS [acute respiratory distress syndrome] in 1918 or bacterial pneumonia. Some say the vast, overwhelming majority of deaths in 1918 were due to bacterial pneumonia, but I don't share that view. There were very rapid deaths in a few days from symptom onset. That clearly wasn’t bacterial.

A difference is obvious in terms of spread. As your readers know, influenza has a shorter incubation period. The length of time COVID-19 takes to work its way into the body is considerably longer. The longer incubation period stretches everything out.

Influenza in 1918 to 1920 would burn through a community in 6 to 10 weeks, and then you forget about it. That's not going to be the case with this. Whether COVID-19 results in a flatter, more continuous line or undulates is not clear.

The 1918 pandemic started with a mild wave of illnesses in the spring, and then 6 months later a fall wave that was more deadly. How did cities respond to the different curves?

No city closed in the spring; that was a mild wave, it was very hit or miss and was really only recognized in retrospect except in military camps. Even medical journal articles at the times said it looks and smells like influenza, but not enough people died [for it] to be influenza. The virulence was so different in the fall wave.

New York City didn't close anything at all, a decision that was highly political. Chicago didn't close schools or much of anything else, either.

Coincidentally, both Chicago and New York had more pronounced spring outbreaks—they were in the minority. But the spring outbreaks provided significant immune protection naturally.

What about other cities? How did they decide when to shut down?

There were no general lockdowns, the way we have today. Most cities closed saloons, theaters, places of public gathering, but no general closing. However, fear was pretty effective in keeping people home. There was tremendous absenteeism from work, whether out of fear or because workers were taking care of sick people.

The ship-building industry had good data. Workers were told they were important as soldiers, they had to work out of patriotism, and there was no sick leave. In addition, there was medical care available in the ship yards that was unavailable in civilian communities.

Even with those factors, they saw 40% to 60% absenteeism. My guess is the absenteeism was significantly higher in other industries.

Metropolitan Life concluded that more than 3% of all industrial workers died because of the flu, and remember how compressed the time frame was—6 to 10 weeks to pass through any community. So when 3.25% of entire population in a working age-group die in a matter of a few weeks, that's a pretty good reason not to go to work.

What about opening up? How did cities make that decision?

It was a back-of-the-envelope calculation by public health leaders, usually pressured by the business community. The question was whether the local public health commissioner was strong enough to stand up to pressure.

After a few weeks, all businesses were insistent on coming out. And there was no radio or TV or Internet, so most people weren't too thrilled with being at home, anyway.

As you watch the current pandemic, do you see any leaders, local or national, who are doing a good job? A bad job?

Governor Cuomo in New York certainly stands out in a good way in terms of communication. John Bel Edwards, here in Louisiana, has done a good job.

Speaking of Louisiana, New Orleans was one of the first cities in the current pandemic to sound the alarm that black Americans were dying more than whites. What sort of disparities were seen in the 1918 flu?

There were epidemiological studies at the time that showed the amount of space that people had was a factor in how many people died in a family—the poorer you are the more crowded you are. Clearly, there was a socioeconomic factor related directly to living space.

Each day, it seems, governors extend stay-at-home mandates. As a historian who has studied people in past pandemics, how long do you think can people maintain this?

As a historian, I don't like to predict. You have to wait and see what the data is. There's been better compliance with social distancing than I expected, and perhaps more compliance then some of the models expected.

On the other hand, certain pockets of people are paying no attention at all. Again, we wait and see what the data says.