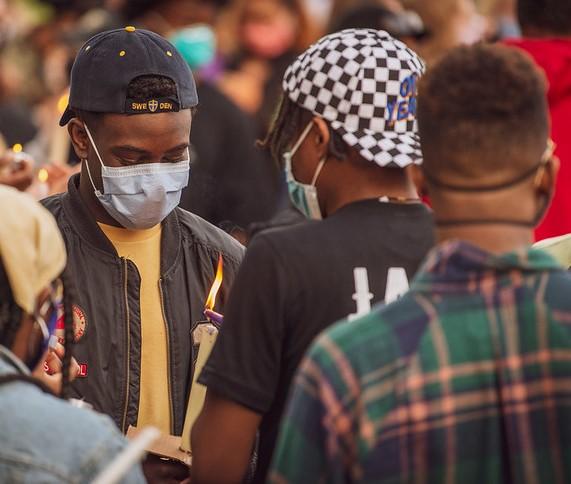 Black Americans are infected with COVID-19 at nearly three times the rate of white Americans, according to a new document from the National Urban League. The report, based on data from Johns Hopkins University, also shows black Americans are twice as likely to die from the virus.

During the early months of the pandemic, the report asserts that blacks were more likely to have preexisting conditions that predispose them to COVID-19 infection, less likely to have health insurance, and more likely to work in jobs that do not accommodate remote work.

Both black and Latino Americans are also more likely to live in multigenerational housing, which places older, at-risk adults in close contact with younger people who may not know they have the virus.

The report’s findings were echoed in new data published today in Morbidity and Mortality Weekly Report, which shows that in many hot spots throughout the country this summer, Hispanics and Latinos were disproportionately infected with the novel coronavirus.

The analysis looked at county-level data for states experiencing a surge of virus activity during Jun 5 through 18. "Disparities in cases were identified among underrepresented racial/ethnic groups in 76 (96.2%) analyzed counties," the authors said. "Disparities among Hispanic populations were identified in approximately three quarters of hotspot counties (59 of 79, 74.7%)."

Community transmission this summer was noted most heavily in Arizona, Texas, and Florida — states with large Hispanic populations.

In its latest summary of modeling forecasts, the Centers for Disease Control and Prevention (CDC) predicts the United States will see 180,000 to 200,000 total COVID-19 deaths by Sep 5.

"State- and territory-level ensemble forecasts predict that the number of reported new deaths per week may increase over the next four weeks in Colorado and may decrease in Arizona, the Northern Mariana Islands, Vermont, and Wyoming," the CDC said.

The poll also showed that most Americans, 73%, would support a national mask mandate. Thirty-four states now require masks in indoor public spaces, but President Donald Trump has said he is not going to issue a national mandate.

Yesterday, former Vice President Joe Biden, the presumptive Democratic nominee for president, and his running mate, Kamala Harris, said they would support a 3-month national mask mandate. In their first appearance together earlier this week, Biden and Harris both donned black masks before making remarks to reporters.

The White House coronavirus task force, in contrast to Trump, is encouraging a mask mandate in Georgia, where soaring numbers hint at uncontrolled community spread. In addition to a mask mandate, the task force is recommending shuttering all indoor dining and limiting social gatherings to fewer than 10 people, according to the Atlanta Journal-Constitution.

No copays for COVID-19 vaccines

Late yesterday, Paul Mango, deputy chief of staff for policy at the US Department of Health and Human Services, told reporters that the federal government will make sure no Americans have to pay copays for the COVID-19 vaccine once one becomes available.

"What we’re hoping is that every American will not only get a free vaccine distributed to many different outlets, but also will not have to pay for the administration of that vaccine,” Mango said on a call with reporters, according to the Wall Street Journal.

In other vaccine news, Anthony Fauci, MD, director of the National Institute of Allergy and Infectious Diseases, said scientists at his institute are working to create a strain of coronavirus that could be used in human challenge trials. In an interview with CNN, Fauci called this a "Plan D" and said the work was still in preliminary stages. Human challenge trials are controversial, as there is no known cure for COVID-19.