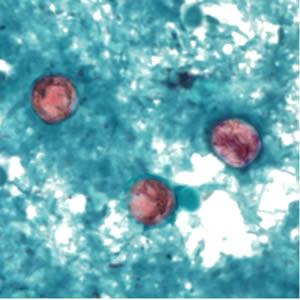 Public health officials in Iowa today shared new details about the Cyclospora investigation, including what led to the identification of prepackaged salad as the likely source and why they haven't named the company or where sick patients were exposed to the product.

The US Centers for Disease Prevention and Control (CDC) said in its latest update today that 378 people have been infected in the outbreak, an increase of 6 from yesterday. So far 15 states plus New York City have reported cases, with most of the cases reported in four states: Iowa, Texas, Nebraska, and Florida.

The Iowa Department of Public Health (IDPH) said in a statement that 145 cases have been reported as of today, the most of any of the affected states, and that the number of new cases continues to decline.

Iowa and Nebraska announced yesterday that the source of their Cyclospora infections is a prepackaged salad mix containing iceberg and romaine lettuce, red cabbage, and carrots. Federal health officials said they are assessing whether the salad mix is linked to illnesses in other states and are also considering other possible sources. The Food and Drug Administration (FDA) said yesterday it was prioritizing the salad mix ingredients for trace-back investigation and is also following other leads.

In early July, when Iowa officials started receiving case reports, Iowa epidemiologists began interviewing patients about where they had eaten, the IDPH statement said.  They learned that patients ate at more than 100 different restaurants and shopped at 80 grocery stores during the time they could have been exposed to Cyclospora. Interviews with patients about whether they ate different produce items quickly ruled out fruit or fruit products.

Investigators narrowed the possible exposure sites to 50, including 15 restaurants and more than 30 grocery stores and other possible sites.

Iowa's inspection department found that 80% of the sick patients had been exposed to the same prepackaged salad mix, and they notified the FDA when they determined that the product was sold in other states and possibly in other countries, according to the IDPH.

The IDPH said it has not released the brand name of the implicated salad mix or locations where it was bought or eaten because of Iowa confidentiality laws. The laws require the IDPD to avoid naming businesses involved in disease outbreaks unless the state epidemiologist or public health director determine the release of the information is needed to protect public health.

The IDPH and the DIA decided that because most of the patients were sick in the middle of June and the implicated salad mix had a short shelf life and was no longer in the Iowa food supply chain, there was no ongoing threat that would require the identification of a certain brand, store, or restaurant. The agencies added that the businesses couldn't have taken any steps to prevent contamination, because the salad mix was prepackaged and ready to eat.

Further, the statement said that if the food was still in the supply chain or if a business was refusing to take steps to protect public health, the IDPH would release the product brand or source. "In such a case, a recall of the item would be facilitated by the FDA. Neither action was necessary in this outbreak," it said.

Bill Marler, a foodborne illness attorney based in Seattle, told CIDRAP News that a handful of states have laws like Iowa's, with language barring the identification of products or sources unless there's a public health need to know. However, he says laws allow health departments leeway with their disclosure decisions.

Marler predicted that the source of the prepackaged lettuce and the outlets that sold or served it will eventually be revealed through the efforts of reporters or lawyers. He said over the last decade of outbreaks linked to leafy greens, there were no instances in which the sources weren't ultimately revealed.

He said the nearly one dozen patients who have contacted him about the outbreak all had eaten at the same large restaurant chain. Only a handful of companies in the United States produce large quantities of prepackaged salad for restaurants, and some are equipped to pack bagged salad for grocery stores, as well, he added.

"Eventually, it's going to come out anyway. Health departments should be open and honest with the public," Marler said.

"As a consumer, I want to know companies' safety records so that I know in the future if I want to buy the product," he said, adding that arming consumers with information that guides their buying decisions is a legitimate public health rationale for sharing the information.