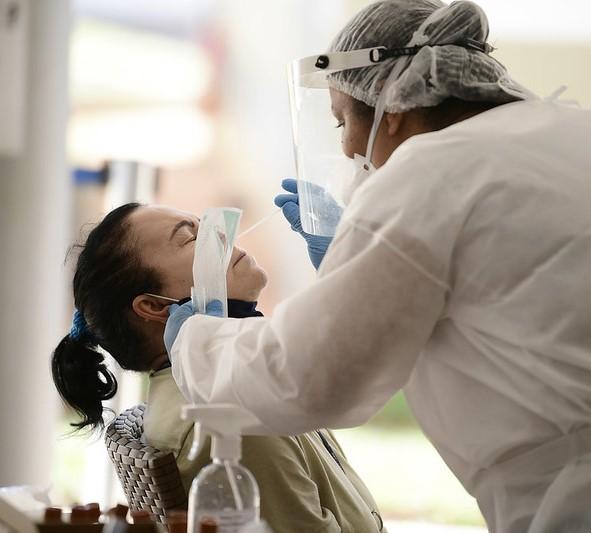 As the world responds to newly emerged Omicron variant, the battle against Delta (B1617.2)-driven surges continues, with activity showing signs of a plateau last week, the World Health Organization (WHO) said yesterday in its weekly snapshot of the pandemic.

With the Omicron variant adding a new wrinkle to a pandemic about to enter its third year, the World Health Assembly (WHA)—meeting in a special session for only the second time in its 73-year-old history—today agreed to begin drafting and negotiating an international agreement to boost pandemic preparedness and response.

Delta's rise slows, but cases up in 3 regions

The WHO said nearly 3.8 million cases were reported last week, similar to the previous week. It added, however, that cases are rising in three of its regions, including Africa, the Western Pacific, and Europe.

The agency said Africa's cases were up 93% compared to the week before, but added that the bump in cases should be interpreted with caution, due to batch reporting of rapid antigen tests from South Africa.

Deaths dropped 10% compared with the previous week. Maria Van Kerkhove, PhD, the WHO's technical lead for COVID-19, said on Twitter that the trend line for deaths should be much lower due to the availability of COVID-19 vaccines. The sluggish drop in deaths shows that the world is not prioritizing vaccination for people at risk in all parts of the world, Van Kerkhove said.

The Western Pacific region's rise was led by spikes in the Northern Mariana Islands, Vietnam, Brunei Darussalam, and South Korea. All of those locations saw weekly increases of 25% or more. In Europe, 23 of 61 countries reported weekly case rises of 10% or more, with the bulk of new cases from Germany, the United Kingdom, and Russia.

The increase in Africa's cases follows a decline that had been underway since late June. Though South Africa's batch reporting made up 43% of cases last week, 21 of the 49 countries in the region reported rises of 10% or more.

Overall, countries that reported the most cases include the United States, Germany, the United Kingdom, Russia, and France.

Van Kerkhove urged countries that have driven down cases to stay vigilant and keep cases low, not with lockdowns, but with tailored and targeted measures based on epidemiological patterns and capacities.

In other Delta developments:

At a WHO briefing today, Van Kerkhove said the WHO expects to have more information on Omicron transmission within days. Regarding severity, she said the WHO has seen reports of Omicron cases that range from mild to severe, but officials are still in the early days of understanding the clinical profile.

Hospitalizations are rising in South Africa, but it's not clear if the pattern is the result of Omicron's impact or because there are simply more cases, Van Kerkhove said.

"Everything we can do for Delta, which is dominant worldwide, needs to be applied and strengthened for Omicron," she emphasized.

In closely watched developments in South Africa, the country reported 8,561 new cases today, 72% of them from Gauteng province where the Omicron variant is thought to be fueling a surge, according to the country's National Institute for Communicable Diseases (NICD). The country's test positivity has jumped to 16.5%, compared to 10.7% the day before.

Hospitalizations increased by 135, up from 119 reported yesterday.

Meanwhile, more countries reported their first detections, including Brazil, where the country's first cases include a South African traveler who apparently passed the virus to his wife, who had not traveled. The traveler had arrived in Sao Paulo before the WHO announced the variant and before Brazil suspended flights from South Africa and other African nations.

Officials said  South Korea reported its first cases, a cluster of five people that include a fully vaccinated couple that had recently arrived from Nigeria.

Also, Nigeria confirmed its first cases, which involve three people who have a history of travel to South Africa, according to Nigeria Centre for Disease Control. All arrived recently in the past week, and isolation, clinical care, contact tracing, and other response activities are underway.

Also at today's WHO briefing, Director-General Tedros Adhanom Ghebreyesus, PhD, called the WHA's action a momentous day for global health, in line with past efforts that forged treaties against tobacco; nuclear, chemical, and biological weapons; and climate change.

"So today, the nations of the world have made a strong statement that health security is too important to be left to chance, or goodwill, or shifting geopolitical currents, or vested interests," he said, acknowledging that the process won't solve all problems and won't happen easily or rapidly.

Tedros said the group committed to hold the first meeting in March 2022, with the goal of submitting the results of the negotiations to the WHA in 2024.

Though countries have differences about what the new accord could or should contain, they found common ground, he said. "The spirit of solidarity that we have seen today is what we need not just to prevent and mitigate the impact of future pandemics, but to end this one."